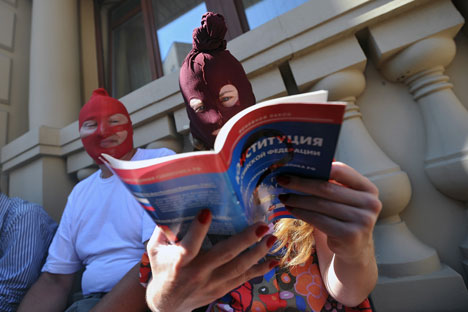 Freedom of expression is a very important right, but if you break the law, you pay the price. Source: Kommersant

Freedom of expression is both a right and a privilege, but nobody, including punk bands, has the right to misuse freedom – if you break the law, you pay the price.

You maintain silence in a library out of consideration for the people sitting there – even if you hate books. So why would you not show the same respect to a church, even if you believe the clergy are crooks?

According to Dr Massimo Introvigne, an Italian sociologist and religion expert, the Pussy Riot issue is being viewed through distorted lenses. “Freedom of expression is a very important right,” he said in an interview with Interfax last week. “I understand concerns about it. However, there is a mistaken idea in some circles that freedom of expression should have no limits. Of course, freedom of expression has limits.”

Nadezhda Tolokonnikova, Maria Alyokhina and Ekaterina Samutsevich, the three members of the Russian rock group, crossed those limits when they desecrated a Moscow cathedral. Indeed, what is being sidestepped in this debate is that the women at the epicentre of this affair committed a cognisable offence.

Dr Introvigne says for what they did inside a place of worship, the three women would have been booked in the West. “If the group entered the cathedral in Moscow and performed a song including obscene words aimed at the Church, the Patriarch and religion – not only at political Russian figures, as some Western media have incorrectly reported – this would have been regarded as a crime under the law of any Western country,” he says.

“Freedom of expression does not include the right to enter a cathedral and shout insults at religion…If words such as 'bitch' and 'shit' were used in the song, it would be illegal under American, Italian, or European Union law."

With atavistic alacrity the West has slammed Russia for the “heavy” sentence. The Obama administration issued a statement soaked in its own crocodile tears: “The United States is concerned about both the verdict and the disproportionate sentences... and the negative impact on freedom of expression in Russia.”

The New Yorker said the verdict means non-conformist Russians will be “neutralised and alienated just as they are increasingly anxious to make a difference. And this means that the women of Pussy Riot are not the last victims”.

You have to admit they are at the very least consistent. For, it seems the American template for criticising Russia hasn’t changed much since the Reagan years because not everyone is being judged by the same yardstick.

In 1991 when Boris Yeltsin’s tanks fired live rounds at the Russian parliament, the Western media, which had ringside seats, hailed him as a hero, all the while cheering the murder of elected parliamentarians holed up inside.

Today the gulf sheiks, the biggest collection of dictators in the world, get a free pass because they do America’s bidding. “Where was the Obama administration’s indignation at the far more disproportionate government response to pro-democracy demonstrators in Bahrain last year?” writes Brett Wilkins of the San Francisco-based Digital Journal. “Dozens were killed by the US-backed ruling al-Khalifa monarchs, just for speaking out against repression and for the freedom America claims to champion. Hundreds were arrested and tortured; anyone suspected of opposing the royal regime was subject to arbitrary arrest, beatings, torture and death.”

“Brutal state security services raided schools, torturing and threatening to rape girls as young as 12,” adds Wilkins. “Doctors and other medical personnel who treated wounded protesters were arrested and tortured as well. Female doctors were tortured with electric shocks, beaten with nail-studded boards and threatened with rape. Some were forced to eat feces. All were tortured to elicit false confessions. Then 47 doctors and nurses were tried and convicted of treason for doing their jobs.”

Right now Russia’s leaders and the Russian Orthodox Church are together working on something as existential as the country’s birth rate. Perhaps it was the small size of the Soviet Union’s apartments or the difficulty faced by young couple in getting one, perhaps it was the high expectations from women, but whatever the reason, under the communists there was a steep decline in the Russian birth rate.

The trend was clear during the 1980s at the height of Moscow’s power – ethnic Russians were destined to be a minority in their own country. It worsened during the lost post-Soviet decades and by 2000 Russia’s fertility had fallen to 1.25 children per female, far below the replacement level of 2.1 needed to maintain the population. Quite literally, Russians were disappearing from the face of the earth.

Putin has revived the Kremlin’s traditional ties to the Russian Orthodox Church. Even as Muslims outpace the native populations in many countries in Western Europe, the Russians “refuse to slide without a struggle into the digestive tract of the House of Islam”, as Spengler writes in Asia Times.

Putin wants the church to guide the country out of a demographic dead-end. The time to act is now when the critical mass remains, and Russia can still bounce back. However, if punk bands like Pussy Riot are allowed to run down the church, that project becomes difficult to implement.

The punk band has the said the verdict is “lawless” and that they will launch more protests. According to the husband of one of the Pussy Riot members, “What Putin wants, Putin Gets.”

Vladimir Legoyda, the head of the Synodal Information Department of the Moscow Patriarchate, rubbishes such sweeping generalisations. In a statement to the press, he said attempts are being made to make the Church an “opposition force” and there are some political and public figures, who will always be negative about the Church until it starts speaking negatively about the authorities.

Opinion polls seem to agree with that view. A few young metropolitan Russians may rage and rant, but only 6 percent of Russians have any sympathy for Pussy Riot. In an August poll by the Levada Centre less than 1 percent said they respect the band. Over 50 per cent of Russians showed negative opinions of Pussy Riot, and 31 percent showed “irritation” and “dislike”.

If the West is hoping the trail will make Putin less popular, that’s wishful thinking. Asked who was responsible for initiating the prosecution, 23 percent said it is the wider church community, 19 percent said the Russian Orthodox Church and only 9 percent pointed their finger at the “Presidential Administration”.

Putin is clearly the beneficiary of this episode. Russians see Pussy Riot as representative of the fashionable and pro-West elements that are arrayed against ordinary people. It also presents a vexing dilemma for Pussy Riot. The more the West backs their case, the more strongly they get identified with pro-Western forces.

The three women may not after all serve their two-year sentence and could get away with a shorter incarceration after their appeal. Even if their songs are not much to write about, they are well on their way to being truly famous, not only in Russia but beyond.

Provided, of course, they show sense. However, the three women and their supporters say they are planning to ramp up protests, in 65 cities. Who knows, perhaps another guerrilla performance in yet another church or the Kremlin could follow. That would force the administration’s hand, resulting in an extended ban.

My advice to Pussy Riot – when you are in a deep hole, the first thing you do is stop digging.