Business ties in a neo-liberal era 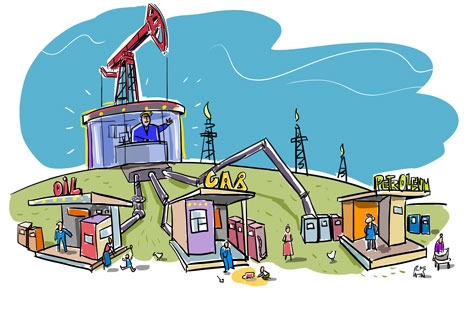 The Indo-Russian trade relationship has to dodge two bullets in the form of Sistema’s troubles in India and the issue over the new Kudankulam reactors coming under the nuclear liability law.

Misfortunes, they say, never come single. The “special and privileged strategic partnership” between India and Russia probably took two beatings in the past week. The sherpas of the two countries will have a hard time mending the fence by the time of the annual summit meeting of the two leaderships due in October in New Delhi.

First, the nuclear energy cooperation between India and Russia, which is a flag-carrier of the bilateral relationship – and, arguably, its most dynamic sector today – may be about to enter a period of hibernation. Equally, just as mutual investment potential between the two countries was getting deserving attention, a dust storm has appeared that threatens to once again mar visibility; and the instinctive Indian reaction may be to pull down shutters and do nothing.

Things never looked better for the Kudankulam Nuclear Power Plant. On August 10, Atomic Energy Regulatory Board granted the clearance to the Nuclear Power Corporation of India to load the fuel assemblies into the Russian-built reactor core and conduct first approach to criticality in Unit 1 of the plant. The expectation is that power generation from Unit 1 (1000 MW electricity) will be possible by January 2013. If the schedule is on course, Unit 2 will also generate power by August next year.

Evidently, attention now turns to units 3 and 4 of the project. This is where a hurdle has appeared. The Russian side is apparently insisting that India’s nuclear liability law spelling out the right to recourse should not apply to any part of this project, which means that the Russian suppliers would have no liability in case of a “nuclear accident”.

But the government has decided to take a prudent course and has rightly sought legal opinion as to whether the Russian contention is admissible. This is a essentially legal issue but it is also not altogether devoid of politics. New Delhi will have to factor in whether any exception shown to the Russian companies might be cited as precedent by American (or French) nuclear companies as well in seeking exemption form India’s Nuclear Liability Law.

There is a lot of bitterness in Washington that the US nuclear companies are yet to get into business in India despite India’s assurances of lucrative multi-billion dollar deals, while negotiating the 2008 US-India nuclear deal. In a scathing attack on the perceived Indian perfidy, an article in the Foreign Policy magazine recently said, “Of the $150 billion jackpot that was supposed to be in play, US firms have not yet earned a dime… Meanwhile France’s Areva and Russia’s Rosatom have been doing a very profitable business in India – thanks to the doors opened by the US government’s 2008 deal.”

Be that as it may, it is without doubt India’s sovereign right to assert that foreign suppliers of nuclear reactors need to learn to live with its national laws, no matter the higher insurance costs or concerns over legal action. The public opinion in India is also very supportive of the government’s apparent resolve to uphold the national laws on nuclear liability.

Indeed, in the present political climate in India, the government cannot dare to re-enact the existing national laws solely to make them “softer” and acceptable to the foreign suppliers. Also, the ground reality is that there is a growing public awareness in India about the issues of nuclear safety and the national discourses will have an unprecedented bearing henceforth on the setting up of future nuclear power plants in the country even if all this may seem tiresome and time-consuming.

Thus, all factors taken into account, the possibility cannot be ruled out that the government may turn down Russia’s plea that the two new reactors being planned at Kudankulam be kept out of the purview of the nuclear liability law of 2010.

If that happens, the prospect of construction work commencing on units 3 and 4 in a near future will be rather remote because fresh insurance agreements will have to be sorted out, which will no doubt impact on the cost of the project. (There has already been cost overrun by 33 percent; the original cost of the Kudankulam project for units 1 and 2 was Rs. 13171 crores whereas it is now expected to be in the region of Rs. 17270 crores.)

The depressing part is that nuclear energy cooperation is one of the few dynamic areas of the economic partnership, while the overall business between the two countries is not exactly booming. Therefore, if nuclear business slows down, overall economic ties suffer.

However, the good part is that all this is happening in a climate free of rhetoric and grandstanding. Indeed, Indian Prime Minister Manmohan Singh did the right thing in ensuring that there is no ambiguity whatsoever regarding the terms and conditions of construction of the Kudankulam project, which could lead to discords and unpleasantness in future.

But another happening in the recent days in New Delhi can be trusted to leave a bad taste and possibly create unpleasantness in the climate of India’s overall relationship with Russia. This concerns the dispute over the fortunes of the Russian telecom company Sistema, which has made multi-billion dollar investment in India – and, apparently using the Russian taxpayers’ money in the bargain – but got nettled in what is popularly known as the 2G scam in India. The Sistema knot may have become even more harder to untie following yet another massive corruption scam that erupted in New Delhi last week.

Briefly, the Comptroller and Auditor General of India [CAG] has made the stunning assessment that the government sold 142 coal fields during the period since July 2004 to private and state-run companies, in which the private companies got a windfall profit of $34 billion because of the ridiculously low prices they paid for the fields. The CAG pointed out that an auction would have given the government some of that money. The uncomfortable tailpiece is that Prime Minister Manmohan Singh was running the coal ministry during the period under reference in the CAG report.

This is a potentially incendiary scandal that opens a window of opportunity for the opposition to drag the prime minister directly into a political minefield. The stunning part is that the latest scandal (branded “Coalgate”) is almost ditto a carbon copy of the so-called “2G scam” (of which the Sistema dispute is an unfortunate residue) where the government allegedly resorted to arbitrary allocation of spectrum instead of resorting to auctions. In both cases, the government took to arbitrary powers to allocate natural resources that resulted in colossal loss of revenue for the country.

The Coalgate scandal has broken out at a sensitive point in Russia-Indian business ties. Prima facie, the Russian company Sistema is an aggrieved party to the “2G scam”. So far, the government’s hands have been tied in the search for a mutually acceptable formula to settle the Sistema case because of the legal implications emanating out of the Supreme Court judgment cancelling the 122 licenses that were arbitrarily given.

But now the Coalgate further complicates the search for a solution to the Sistema dispute. Simply put, the Indian government cannot be expected to muster the requisite political will to take any bold decisions regarding the Sistema dispute at the present juncture when it has been put on the back foot by the Coalgate scandal. Somehow an impression is fast accumulating in the perceptions of the Indian public that this is a notoriously corrupt government, which is lurching from scams to scams. Which, in turn, means that any political decision taken by the government with regard to Sistema at this juncture will inevitably come under close scrutiny in the Indian public opinion.

These are indeed times when whichever way the government acts, motives are bound to be attributed to its actions and decisions by its detractors and the opposition political parties, which are only too eager to call into question the government and ruling party’s integrity in the prevailing permissive neo-liberal economic environment in India. The Sistema dispute is no exception.

Whether this is a logical or is a reasonable thing to happen to Sistema’s impeccable business ethic in India or not is not the issue here. The heart of the matter is that politics is very often a matter of perceptions and at this point in Indian politics, the perceptions happen to be highly unfavorable to the government and the ruling party.

The natural instinct of the government placed in such a predicament – arguably, any elected government – would be to play it safe by resorting to masterly inactivity. But, on the other hand, the Sistema’s grievance cannot go unattended, either, given the strong feelings its advocates have displayed as an aggrieved party. To be sure, the sherpas have a job on their hands to show the politicians an exit route.