Combined report
RIR
The Sugarpova collection consists of 12 varieties of varying tastes and shapes, representing the many facets of its creator’s personality.

Russia’s number one tennis player Maria Sharapova is much more than a champion now; she has a brand of candies called Sugarpova. Her new company, which launched the savouries on August 20 at the Henri Bendel store in New York’s Fifth Avenue, offers candies from tennis ball-shaped gum balls to sour jelly for $5.99, according to its website. 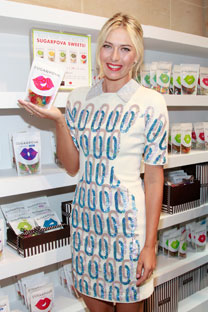 “I wanted to own something - something 100% me,” Sharapova said. “Where I make all the final decisions; here I'm involved from start to finish; where I was bringing in my own people I want to work with and investing my own money. I wanted fun and young and nothing too serious. That's how it came about with candy."

The Sugarpova collection consists of 12 varieties of varying tastes and shapes, representing the many facets of its creator’s personality: chic, flirty, silly, splashy, cheeky, sassy, spooky, smitten, quirky and sporty.

Renowned candy expert Jeff Rubin helped Sharapova make her candy dream a reality, according to ESPN Playbook. “We all know that everyone, including athletes, love candy, so what’s wrong with endorsing what we all eat?” he told ESPN. “Maria Sharapova is the quintessential example of today's young woman – she's always on the go, fun, fierce and vivacious,” Rubin added. “She's the type of girl who never settles, and Sugarpova perfectly embodies her spirit of both style and substance,” ESPN Playbook quoted Rubin as saying.

Maria Sharapova is one of the richest athletes in the world, according to Forbes. She earned $27.1 million in the last 12 months -- $22 million of it from sponsors, exhibitions and appearance fees.  The tennis star is the "face" of such brands as Nike, Samsung, Tiffany & Co, Canon, Land Rover and Lady Speed Stick.

“Creating Sugarpova has been an exciting labour of love,” Sharapova said. A portion of sales from the Sugarpova collection will be donated to the Maria Sharapova Foundation, furthering her ongoing dedication to a charitable cause close to her heart.

Sugarpova is just one of the events to remember for Maria this year as the 25-year-old completed her Career Slam in June and made her long-awaited silver debut at the Olympics in August. And on November 10, she will marry Slovenian basketball player Sasha Vujacic.

The article is based on reporting from RT.com and ESPN Playbook.