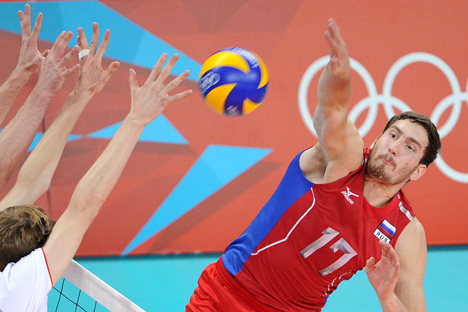 The Olympic gold-medal winning Russian volleyball team talks to Rossiskaya Gazeta about the glory of winning at the grandest stage.

For some time, experts will analyze exactly what happened in the men’s volleyball gold-medal game at the 2012 London Olympics. Initially, it seemed that Brazil would easily defeat Russia after quickly taking two sets. However, when Russian coach Vladimir Alekno changed his lineup, putting Dmitri Muserskiy on the attack and Maxim Mikhaylov as the outside hitter, everything changed. In the third set, the Russians grabbed two match points and took that set along with the next two.  Russia defeated Brazil 3:2 (19:25, 20:25, 29:27, 25:22, 15:9), winning a victory that was historic in every way.

Said Alekno: “The dreams of an idiot came true. They say to never go into the same river twice, but I tried.” Alekno was unable to lead the national team to an Olympic gold four years ago in Beijing, which made the London win even sweeter.

National team captain Taras Khtei tried to capture the team’s feelings in comments after the win.

“The team is victorious today. We played through a huge amount of work. This isn’t just a day, a week or a month of training. We prepared for this Olympics for almost three years. Some won more, some less, but in this sense, every team deserves praise. As well as the personnel, massage therapists, doctors, the federation, wives, children, and our parents, who helped us reach such heights,” Khtei said. “Believe me, the medal around my neck is very heavy. A lot was invested in it. And for this reason I want to congratulate the whole Russian national team, the whole country, because we haven’t won in 30 years, since the time of the Soviet Union. And, of course, it’s twice as nice that we, in particular, get to have our names entered in to the history of Russian volleyball.”

Opposite hitter Maxim Mikhaylov spoke with Ilya Zubko of Rossiyskaya Gazeta about what the victory meant to him.

Rossiyskaya Gazeta: At a decisive moment, they switched you to opposite hitter. When did you play that position last?

Maxim Mikhaylov: Probably, half a year ago. Really, I hadn’t played that position for some time, but it wasn’t hard to remember. More praise should be given to the trainers, who believed in this tactic. It was probably hard in the final with the score 0:2 to entrust me with outside hitter, when we have so many other good players.

RG: Why did Alekno do this?

M.M.: I don’t even know. During the championship, we tried this, practiced it, and got something out of it. Maybe he recalled the moment, when I was the outside hitter in the World Cup against the same Brazilian team.

R.G.: Why, as with the match against the Americans in the team event, did you have to lose two sets, bringing the game to the match point, only to then change it up?

M.M.: Most important is that we won – as with the game against the Americans. We didn’t win right away, as the score showed. We won back with 0:2 – it meant a lot. And even more in the Olympic finals.

R.G.: Besides the switch, what else helped you change up the direction of the game?

M.M.: The switches were one of the deciding factors. Besides this, we had team spirit. During the first two sets, everyone was down. Everything slipped right out of our fingers; we didn’t have any confidence in our force. But at the beginning of the third set, when we started to get back into the game, everyone believed in themselves, and we loosened up a bit. This was important.

R.G.: So the reason was mainly mental?

M.M.: Of course. Certainly psychology – it’s not only our problem. Without confidence, you may be a great player, but you can’t achieve anything.

R.G.: How did Alekno prepare you for this game, what did he say?

M.M.: First, he told us that we need to play our game and not watch the Brazilians. Usually, everyone who plays against them tries to move like they love to – play fast volleyball. But you need to stick to your tactics. You also need to play as relaxed as possible. Everyone tends to play timidly against the Brazilians and they win on account of these emotions.