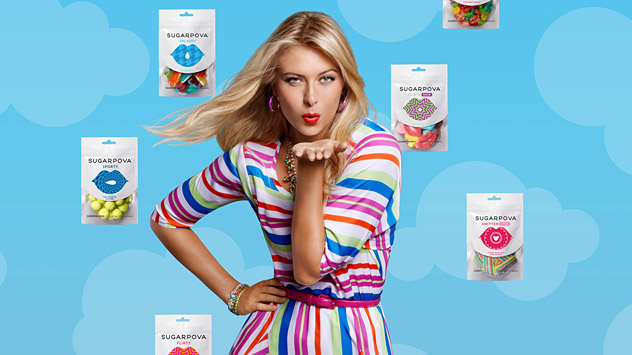 Maria Sharapova was interested in creating a new product that reflected her own style and personality. Source: Sugarpova.com.

Proceeds from the tennis star’s new Sugarpova candies will benefit victims of the Chernobyl disaster.

While in New York for the U.S. Open, Russian tennis superstar Maria Sharapova presented her new Sugarpova line of candies.

Although Sharapova’s image is used to promote many world brands, she was interested in creating a new product that reflected her own style and personality. She settled on candy because it could be both fun and fashionable. The sweets are available in 10 different flavors and come in various playful names and bizarre shapes—including the shape of tennis balls, all in attractive packaging.

‘It’s the most exciting project I have ever been involved in,” Sharapova said, standing in front of a Fifth Avenue window display full of her tasty treats, “because it’s my business, my investment, my money.” The tennis star’s partner in this initiative is industry expert Jeff Rubin, founder of the international distributor It's Sugar. “I couldn’t find anything like it on the market,” Sharapova said, “so I decided to make my own candies, kind that that girls like me go crazy for.”

The new business also has a broader aim – part of the proceeds will go to the Maria Sharapova Foundation, which works with victims of the Chernobyl disaster. The gummie candies will be sold on the Internet and in the boutiques of luxury hotels all over the world for $5 per pack.