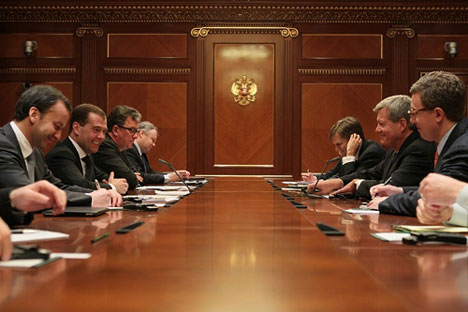 Today is an historic day for Russia as it becomes the 156th member of the World Trade Organization.

It’s the culmination of over 18 years of negotiations and hard work and brings one of the world’s largest economies rightly into the global rules-based trading system. The Obama administration has been a strong supporter and advocate of Russia’s WTO membership since President Obama took office. In my previous position at the White House, I worked closely with other senior members of our administration and the Russian government to complete the final negotiations on this accession agreement. These negotiations were tough, but successful, producing an outcome that is good for Russia, good for the United States, and good for the world economy. President Obama and our administration are pleased that our cooperation with Russia and other WTO Members has helped move the process toward this successful conclusion.

Russia and its trading partners will now be able to benefit from the WTO rules that underlie open, free, transparent and fair global economic competition. Predictable tariff rates and an enforceable dispute resolution mechanism will give Russia and its partners more certainty, and encourage deeper long-term economic cooperation. There will be new opportunities for American and other companies to provide goods and services to Russia’s vast economy and burgeoning consumer market. As a WTO member, Russia’s average bound tariff rate for industrial goods will drop from almost 10 percent to approximately 7 percent. There will also be greater market access for agricultural exports as well as to large portions of Russia’s services market, including audio-visual, telecommunications, financial services, and energy services. Moreover, Russia must abide by its commitments to follow WTO rules on technical barriers to trade, subsidies, sanitary and phyto-sanitary measures, and in its protection and enforcement of intellectual property rights.

Russian consumers stand to benefit from WTO accession through a greater choice of products and the improvements in quality and price that stem from greater competition. There has been debate in Russia about the competitiveness of certain Russian industries and the impact of WTO membership on certain sectors of the economy. I understand that concern, as we have seen the effects of foreign competition over and over again on U.S. industries, and the transitions are rarely easy. But, I have also seen that competition spurs new thinking, encourages modernization, and ultimately boosts the economy. Most experts agree that Russia’s membership in the WTO will boost Russia’s GDP (gross domestic product) substantially once the accession agreement is fully implemented.

We expect Russia’s WTO membership to give an added boost to our already growing trade with Russia and to deepen our overall economic ties.

When President Obama and President Putin met in Los Cabos Mexico earlier this year, they both agreed that increasing trade and investment between our two countries must be a major focus of our bilateral relations. Russian membership into the WTO is an important step towards that end. Of course, for U.S. companies to fully benefit from the opportunities of Russia’s WTO accession, we need to terminate the Jackson-Vanik amendment as it applies to Russia and extend Permanent Normal Trade Relations. The Obama administration looks forward to continuing to work with Congress when they return from the August recess to make sure that this happens.