The Syrian crisis and the future of the global economy 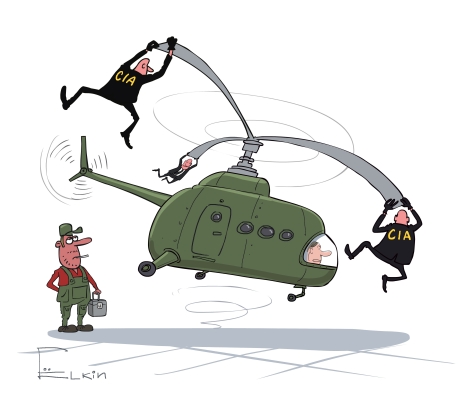 Today the biggest problem the West is facing is not the removal of Bashar al-Assad from his position (amid total uncertainty regarding Syria’s future), but restarting economic growth in America and Western Europe.

We are witnessing in real-time the formation of the polycentric, post-American world. Naturally, this process is non-linear, and its trajectory, as forecasted back in the 1990s by one of the most outstanding economists of our time Charles Kindleberger, will inevitably run through conflicts of varying intensity.

The Middle East has the largest amount of conflicts in the world today, hosting several groups of dramatically developing disputes: historic, confessional/denominational, national/ethnic. And while until recently, these disputes remained latent under local authoritarian regimes. Today, following the Arabian revolutions of 2011, they have become overt. Logically, these disputes and problems require a systematic approach and a solution that would help preserve the unity and territorial integrity of the various countries in the Middle East. Otherwise the historical Pandora’s box (an image we could use to describe the societies in the region), once opened, will be impossible to close. This could bring about clear destabilisation not just in Syria, but also to other countries in the region.

It is obvious that the U.S. and its junior partners are trying to use the Syrian crisis to maintain their positions in the global system and simultaneously to weaken their primary rival and principal creditor, China. Beijing, however, realises that an attack on Damascus is a blow to the positions of Tehran, a strategic ally to Syria, and an attempt to cut off Iranian oil from China. Such a scenario would help the U.S. meet its primary objective – to contain the ‘Chinese expansion’ in the Asia-Pacific. The U.S. has to work in several directions at once. One of them is countering the ‘expansion’ of China in the Asia-Pacific. America’s ‘anti-terrorist’ mission in Afghanistan is far from being over. Some western analysts suggest that participation of the U.S. in overthrowing Muammar Gaddafi’s regime indicates the new strand in Washington’s policy:– the ‘fight for Africa’, supposedly against China again.

All of this leads to an obvious overload – in financial, economic and physical terms. American experts warn the acting administration that direct participation in the Syrian conflict can be very costly in case it proves to be lengthy.

Fueled by the continuing Syrian conflict, anxiety is building up in the West, placed in the wider context of the role played by the North Atlantic civilization in the global economy and politics. Driven by its most discerning representatives, a part of the American foreign policy establishment is questioning what the current Washington administration is looking for in a faraway land? And what consequences of this ‘experimentation’ could follow for America and its role in the transforming global system? These questions are, clearly, rhetorical, and the answers to them are exhaustively practical.

Henry Kissinger suggests articulating America’s new strategy in the Arab world in place of the fierce desire to remove Bashar al-Assad from his position. This idea found new momentum in the maestro’s American diplomacy address to his less experienced colleagues where he urged them to keep in mind the ‘unfinished mission’ in Afghanistan and the essential role of  the economy in the development of the American foreign strategy.

The uncertainty concerning the resolution of the ‘Syrian riddle’ and the inevitable historic parallels cannot but influence America’s actions in the region. In the past, the imprisonment of Americans and the failed rescue attempt worked, among other factors, in favour of the Republicans during the 1980 elections (when Ronald Reagan was elected as president). Which gives rise to the question of what will happen today if the U.S. gets involved in the Syrian crisis directly? It bears noting that the hasty, ill-considered actions of the West can result in further strengthening of Iran (and Egypt, recovering from the revolutionary unrest). We can’t forget that in 2003, George Bush Junior, obsessed with the idea of destroying Iraq’s weapons of mass destruction, has conferred a truly fantastic favour to Tehran by solving the problem of the ‘accursed’ Saddam Hussein for Iran. And today there is a new question of a Hamletian proportion; can it happen that Iran will benefit from demolition of the decrepit political system of the ‘petroleum monarchies’ in the Persian Gulf?

Henry Kissinger and Brent Scowcroft are clearly pondering over such a prospect. It would be interesting to know what Barrack Obama and Mitt Romney have to say about this scenario. One of the most distinguished social economists of our days John Kenneth Galbraith once said: “Politics… consists in choosing between the disastrous and the unpalatable”. I believe that today the West is facing the problem in exactly this perspective.

Today the biggest problem the West is facing is not the removal of Bashar al-Assad from his position (amid total uncertainty regarding Syria’s future), but restarting economic growth in America and Western Europe. The splendid ideas of the ‘economic growth pact’ require that domestic efforts must be focused on nothing but economic growth. Growth that predominantly results from domestic factors and the strategy of economic development in this area cannot focus exclusively on support of the most viable economy in the EU, i.e. Germany. A joint effort to restore the economies of Western Europe will lead to reduced relevance of the Syrian crisis to the citizens of the West. The aggravation of tension in the Middle East has an apparent political agenda: to distract people from helplessness of the Western European elite against the progressing economic and financial crisis.

Naturally, this gives rise to a question: what role could be assigned to India in resolution of the Syrian crisis? I would say a potentially significant one. With Pranab Mukherjee, one of the country’s most experienced and distinguished political figures, elected as President of India, its foreign policy seems to be developing coherence and genuine independence from the interests and the agendas of foreign forces. This independence is assuming the shape of specific foreign-policy initiatives. I believe that India realizes that the situation is not about a crisis in a remote country, but about the principles of modern politics that are sacred for Indians – unity and territorial integrity of modern states.

The Libyan model of crisis resolution has proven to be utterly nonviable. That is why there is a need for new mechanism and new initiatives for the global system. The West is no longer the hub of the universe. The new global order will form through the development of horizontal cooperation between countries and regions. Also in store is the establishment of new regional and trans-regional economic and political institutions and development of their networks. Any attempt to reshape the global map by a group of states provokes a response from institutions, such as the Nonaligned Movement and BRICS.

The Indian strategic elite recognises the importance of close cooperation with Iran in economics and geopolitics. Globalization as it was at the time of the Washington Consensus has fallen into oblivion. The protracted globalization (B.R.Nayar) is being replaced by global regionalization, opening new and inviting opportunities to India.

Speculation about the possible economic union of four countries, Iran, Iraq, Syria and Lebanon, has been doing rounds for years. This refers to the future of the common market with the tendency towards compression of economic space. I think that India, Russia and Pakistan are displaying ever-growing interest in economic diplomacy. This mutually beneficial strengthening of relations holds one of the keys to resolution of conflicts and transition to the multi-polar, post-American world.