No borsch for APEC attendees 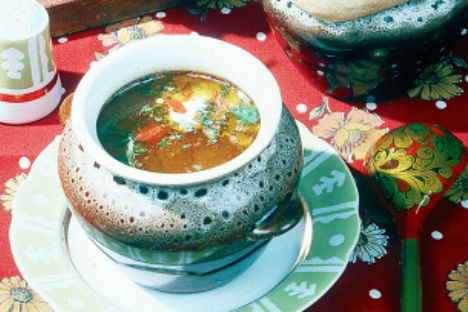 Free catered meals at next month's Asia-Pacific Economic Cooperation summit in Vladivostok will include blini but no borsch. Photo: Free Source

Free catered meals at next month's Asia-Pacific Economic Cooperation summit in Vladivostok will include blini but no borsch.

Free catered meals at next month's Asia-Pacific Economic Cooperation summit in Vladivostok will include blini but no borsch, the chief of the catering company said Wednesday.

Corpus Group decided to strike off the menu the traditional Russian soup of beets, cabbage and beef because it could offend or puzzle some of the guests that come from a great variety of American and Asian nations, said Oleg Lobanov, the caterer's chief.

"Beets aren't used in many of the countries," he said. "Or they are used as animal feed."

Up to 5,500 attendees will consume breakfasts, lunches and dinners during the busiest days of the forum, Sept. 7 and 8, Lobanov said.

Corpus will also feed its own employees — about 2,000 people who are mostly college students on temporary hire.

The company has chosen to cook largely European-cuisine for the event, but it will offer some of the local, Far East, specialties: scallops, crabs and several salmon species.

Local seafood is "something we will emphasize in the evenings, so people can appreciate the land they are visiting," Lobanov said.

State sanitary inspectors will be checking the seafood for any radioactive contamination that may have drifted from the site of the nuclear power plant meltdown across the sea in Japan.

In addition to blini, or thin pancakes, the Russian dishes for breakfast at the forum will include syrniki, or fried cottage cheese pancakes.

The company will also run a round-the-clock restaurant where the delegates will have a chance to opt for something else, for a fee. French chef Christophe Moisand, on loan from Le Celadon restaurant in Paris, will be in charge of this fine-dining venue.

Corpus agreed to take the catering contract in April after a French and a U.S. company turned down the chance, Lobanov said. The companies, which he declined to name, passed up on the opportunity for reasons that included the ongoing construction work at the time, Lobanov said.

Lobanov lamented that some key equipment at the venue, the newly built Far East Federal University campus, has yet to go into operation.

"Our headache now is elevators that aren't operational yet, although the deadline has long passed," he said. "They are promising to do it by the end of the week."

Corpus will also provide housekeeping services at the campus buildings that will function as hotels during the forum.

The company has landed some top-of-the-line catering contracts before. It provided meals during then-Prime Minister Vladimir Putin's visit to carmaker AvtoVAZ and served a dinner for President Dmitry Medvedev and Queen Margrethe II of Denmark last year. The company also caters for units of some of the country's biggest corporations, such as Rosatom and Power Machines.

The APEC forum contract is one of the most intense tasks the company has ever taken on, Lobanov said. Comparably challenging, he said, was catering for the military hardware exhibition in Nizhny Tagil, where the company served 13,000 international guests over four days in September.