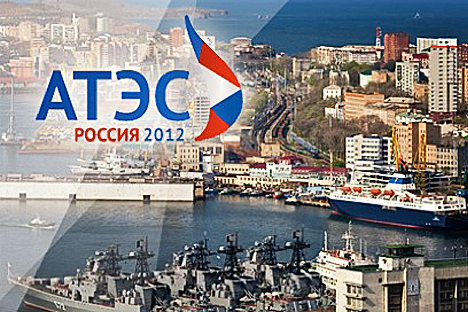 Collage: The Voice of Russia

The Asia-Pacific Economic Cooperation summit in Vladivostok on 7-9 September will attract both political and business leaders of member nations comprising the forum. Delegations from over 500 companies operating in the region are expected to attend the summit to discuss global economic and political threats as well as the shortage of resources. The APEC`s heads of states are expected to join the discussion.

Russian businessmen are concerned over their country’s low involvement in business projects launched in the Asia-Pacific region. A poll conducted among APEC businessmen says that Russia should simplify cooperation between business and customs service, invest in infrastructure and rely more on innovations. Experts claim that investing $20-30 billion in infrastructure could result in increased trade volume between the APEC member states up to $600 billion by 2020.

The summit is taking place at the initiative of the presiding country and with active support from the Advisory Council, which comprises 3 businessmen from each member nation, who are appointed by the head of state – in all, 63 representatives from 21 APEC nations. They all are responsible for making decisions to improve the economic integration between the countries. Russia is represented by Oleg Deripaska (chief executive officer of Basic Element company), Ziyabudin Magomedov (Chairman of Summa Group) and Andrey Kostin, head of VTB Bank.