Russia could save APEC countries $600 billion 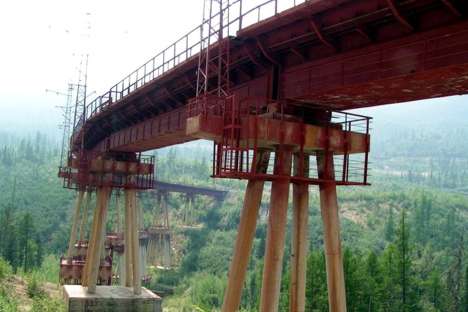 By creating a transport corridor in Siberia and its far eastern regions, Russia will also be able to increase its trade turnover with countries in the APEC region.

Russia needs $20 billion to develop the Baikal-Amur Mainline and the Transiberian railway. This would then turn Siberia and the Far East into important transit corridors linking Europe with countries in the APEC forum. At the moment Russia’s trade turnover with APEC states is miniscule – just 1.5%.

In order to develop its transport infrastructure, which would entail modernising the Baikal-Amur Mainline (BAM), Russia needs to attract $20-30billion investment. Once this project has been implemented, countries in the Asia-Pacific Economic Cooperation (APEC) forum could save $600 billion by 2020 by using Russia as a transport route for exporting goods to the EU. This sum,  based on research by PwC, was calculated by Vladimir Androsik, chairman of the board of the APEC National Business Centre, an organisation for Russian companies with interests in the region. Androsik says this theme will be discussed at the business summit that will be held in Vladivostok on 7-8th September as part of the APEC summit. By creating a transport corridor in Siberia and its far eastern regions, Russia will also be able to increase its trade turnover with countries in the APEC region. At the moment this figure is a very meagre 1.5%, notes Oleg Danilin, head of global financial services advisory CIS at Ernst & Young.

The development of the Baikal-Amur Mainline and the Transiberian Railway was discussed at the beginning of August at a meeting in Omsk attended by prime-minister Dmitry Medvedev. He has instructed Russian Railways, along with the Ministry of Transport and the Ministry of Economic Development to produce plan to attract businesses willing to take part in the project for developing the transport corridor in Siberia and the far east of Russia. According to calculations from Russian Railways, the development of the Baikal-Amur Mainline will require more than 730 billion roubles, and the Transiberian railway will need around 180 billion roubles.

The transport corridor to Europe through the far east and Siberia would be welcomed by the world’s biggest exporters, including China, who, according to PwC, control 30% of the overall export of APEC countries ($5.7 trillion in 2011). Most of China’s exports to the EU are currently shipped via the Indian ocean.

However, for the time being Beijing is not expecting to significantly increase its exports to the EU. In July this year, referring to China’s Ministry of Commerce the Xinhua news agency reported that export from China to the EU came to $29.37 billion, which is 16.6% less than the same figure for June. Meanwhile China’s export to other countries grew by 5.5% over the same period.