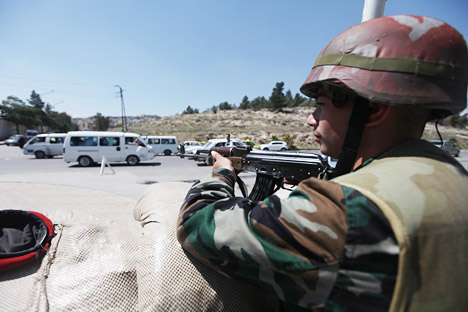 Guards of chemical weapons bunkers will be the first victims in the case of US military attack. Source: Rustam Buzanov / RIA Novosti.

According to a Los Angeles Times (U.S.) report last week, the Pentagon has developed a plan for its special troops to capture bases in Syria that stockpile chemical weapons. The scenario is set to be implemented following a corresponding order from the White House.

The plan itself it involves “small, secret, ground operations by groups specially trained to capture similar objectives.” According to the Los Angeles newspaper, if necessary “some pointed air strikes” may be ordered for the complete destruction of chemical weapons depots, as well.

According to a source in the U.S. intelligence services, on which the Los Angeles Times report is based, the Syrians possess nerve agent stocks (sarin and mustard gas). It also cannot be ruled out that another military gas – VX – may have been developed in Syria, as well. Stocks of these substances are said to be located in bunkers and storage facilities near the cities Aleppo, Hama, Homs and Latakia.

Data published earlier by the James Martin Center for Nonproliferation Studies in Monterey, CA (U.S.) estimates that these Syrian stockpiles include hundreds of tons in shells of chemical warheads and chemical aerial bombs.

“The consequences of such an attack are unpredictable. Chemical weapons will spread and threaten the environment, the population and the region as a whole,” said Boris Dolgov, a Ph.D. (History) and senior political scientist at the Institute of Oriental Studies of the Russian Academy of Sciences. However, Dolgov doubts that the Pentagon will elect to bomb Syrian chemical weapon depots, at least not before the U.S. presidential election.

Dolgov shares his opinion on the feasibility of the Pentagon's plan the probability of chemical weapon use by Damascus.

VZGLYAD: According to the Pentagon's plan, the Americans can attack the Syrian, chemical weapons bunkers from the air. How realistic is such a plan as a whole? What would be the consequences of the attacks?

Boris Dolgov: A military attack against a sovereign country, which Syria is, has rather serious consequences. This attack must involve not only air raids against the objects possessing chemical weapons, but also the destruction of Syrian air defense systems, because naturally such objects will be protected. I think that, at present, this is fairly difficult and the consequences of such an attack are serious, even for the United States.

Military operations against Syria may lead to disaster

To speak concretely about such an attack, certainly those who are protecting these bunkers will suffer – the sentries will be the first to die when these weapons stocks are destroyed. This is not, after all, a storehouse filled with military uniforms; therefore, the consequences of these attacks are unpredictable. The chemical weapons will spread and threaten the environment, the population and the region as a whole. Therefore, I repeat, this step is too serious an action. Taking into consideration the fact that there is an election campaign in the USA, I do not think that the White House will decide to do this.

VZGLYAD: The experts agree that the Syrian chemical weapons are old. Is it possible that these weapons have passed their shelf life? How dangerous can it still be?

B.D.: Certainly, all components of such weapons have an expiration date. There is no concrete information on Syria’s chemical weapons. Certainly, if the Syrian army has such weapons, it keeps them in the proper conditions and checks their storage periods. I think that there are no questions in this regard.

VZGLYAD: It is obvious that the United States is afraid of the chemical weapons falling into terrorists’ hands, for example, those of al-Qaeda. Can any terrorist groups capture and then transport the chemical warheads over long distances? Or is this only within the power of an army, regardless of whose?

B.D.: In general, the United States pursues a strange policy towards the radical Islamism. On the one hand, it fights against it in Afghanistan and Yemen, and on the other hand, the United States supports it in Libya and Syria. Therefore, saying that the United States is afraid of chemical weapons falling into the hands of al-Qaeda in Syria is, let’s say, a question with a double meaning.

But if we speak specifically, then this is quite possible. Not only the government troops but also the militant groups can transport separate components of chemical weapons.

VZGLYAD: How probable is that the Syrian authorities would use the weapons against the rebels? They say it happened in the early 1980s.

B.D.: There was no use of chemical weapons in Syria. It is known that the armed actions of the Muslim Brotherhood took place in Homs and Hama. But chemical weapons have never been used against them. They were used in Iraq, though.

As for using the chemical weapons against current, so-called rebels, I do not think that an analogous political decision will be made. It would be too dangerous and unnecessary for the Syrian government, since these weapons have a two-way effect: they can spread in the region and affect not only those against whom they are directed, but also those who use them. So the use of chemical weapons by the Syrian authorities against the rebels is impossible. For the Syrian government, this would backfire too much.

VZGLYAD: Does it make any purely military sense for Syria to use chemical weapons, in the event of a NATO intervention?

VZGLYAD: How ready are the military powers of NATO, such as Turkey, to rebuff any chemical attacks?

B.D.: There are chemical protection troops in all countries of NATO and there are such units in Russia, also. They are rather well developed, though – it is a known historical fact – chemical weapons have not been use anywhere since World War I, with the exception of Iraq.