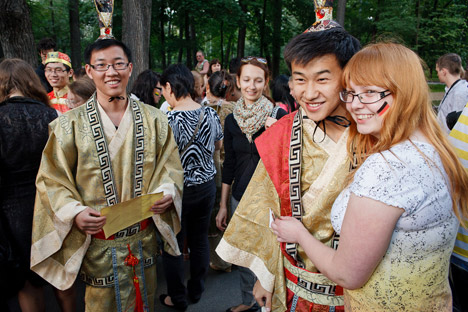 Most of the participants were students who had come to Moscow for the AIESEC International Congress. Source: Ruslan Sukhushin

Last week the 64th Annual AIESEC International Congress wrapped up in Moscow. It was the first time the event was held in Russia. One of its most important events was the International Culture Festival in Sokolniki Park.

On Aug. 17, a cloudy Friday turned out to be the perfect day to make friends with people from all over the world, as citizens from 110 countries gathered in a single location at one of Moscow’s oldest parks of Sokolniki. Here, the International Culture Festival was held, giving people an important opportunity to share their cultures amongst one another. Upon entering the park, visitors were shocked at the sheer variety of people promenading in national costumes, speaking unfamiliar languages, with flags drawn on their cheeks — German, Ethiopian, UAE and many more.

They were signing Uzbek songs, Russian chastushka rhymes (to the delight of the public), and someone was blowing into a real African bugle like there was no tomorrow. These were the people who would late take part in a feast, where they spoke about and displayed all the things their native countries had to offer.

Once, centuries ago, Sokolniki was a royal leisure quarter, and festival organizers made use of every inch of its vast space. The original plan was to bring together 25,000 people, and the program of festivities comprised of events for both children and adults. Most of the participants were students who had come to Moscow for the AIESEC International Congress, a renowned, apolitical, not-for-profit independent youth organisation. The International Congress is one of the largest international youth events in the world, designed to promote and strengthen student contacts and cooperation.

In mid-August, AIESEC held its 2012 International Congress in Moscow, Russia. The annual conference, which is always the largest and most-anticipated of the international organization’s events, was held at Moscow’s Cosmos Hotel. The conference agenda included 10 days of special events for AIESEC’s top members, including leadership symposiums, youth business forums, and a gala dinner. A special, day-long Russian Festival and the Global Villages of the International Cultural Festival in nearby Sokolniki Park were also included in the conference program. AIESEC has held past International Congresses in Kenya, India, Brazil, Malaysia and Poland.

Everyone made the most of the atmosphere of national cultures. The centre of attraction was the ‘Cultures of the World’ fair. It was a interesting sight to behold — tables with representatives from various countries eagerly answering questions, offering to draw their country’s flag on visitors’ cheeks, have their pictures taken and make new friends. Some of the tables had national dishes on them for visitors to taste — sauces, nuts and pasta. “They treated us to some incredibly spicy Australian pasta. They claim it’s their everyday breakfast. They can’t be serious!” laughs Anna, a Muscovite who visited the festival.

“There was so much to see at each table, although it was quite hard at times to actually reach the tables,” says Margarita, a dancer at the Greek Culture Centre. “What impressed me most on stage were the Armenian, Uzbek and Polish dances. Some of the spectators were snatched from the crowd and drawn into circle dances — this helps you to really feel the atmosphere of foreign culture.”

African and Asian countries seemed to interest the audience the most — such exotic locations as Cameroon, Ghana, Cote d'Ivoire, Cambodia and Malaysia won public attention, while Europe seems to have lost its edge, as some stands were half-empty. “Last year the Congress was held in Kenya, and we had a great deal of attention,” says Nadezhda, AIESEC president in Slovakia. “They are very interested in Europe there.” Lyubov, a visitor of the fair, admitted that the African stands excited her the most. “You can get to know things about countries that you have never heard of and never thought of, mostly in Africa, of course. I would love to go there now!”

In addition to the fair, visitors could admire pictures from National Geographic, be distracted by an interactive ‘Multinational Russia’ stand and take part in environmental projects. The Greenpeace polar bear of the ‘Save the Arctic’ campaign was welcomed by the audience. Not only Moscow, but also Australia, India and China have their own bears volunteering for environmental projects, which contribute to the Greenpeace campaign to prevent commercial exploitation of the Arctic. The Moscow Bear (an activist wearing a bear costume) became one of the most popular figures at the event, hugging visitors as they took pictures. After receiving their hug everyone was willing to put their name down in favor of a program to save the Arctic.

Free language lessons, organized quite spontaneously in the street, were very popular as well. People were gathering around flip charts and lecturers who were enthusiastically sharing the basics of their native languages. Lines for temporary henna tattoos were impossibly long throughout the entire event.

It seemed Muscovites appreciated the Culture Festival. “It’s a truly significant event for Moscow residents, as everyone gets a unique chance to get acquainted with a foreign culture absolutely free of charge,” says Lyubov. "The participants are open and friendly people eager to meet and speak about their countries and have their pictures taken… It is a very inspiring atmosphere! I’ve chosen a few countries to visit!” she added.

Participants and organizers were also seemingly delighted with their contribution to the Moscow event. Many confessed that it was not the first time they had met and communicated with each other. The only thing that puzzled them was the rather cool Moscow weather. “I’m happy,” says Aziz Beyrakoar, who represented Tunisia. “I have a unique chance to share my culture, and I am pleased that people are aware of my country. But it is very cold in Moscow; it’s 42 degrees in Tunisia right now.”