The Russian navy as an instrument of grand strategy 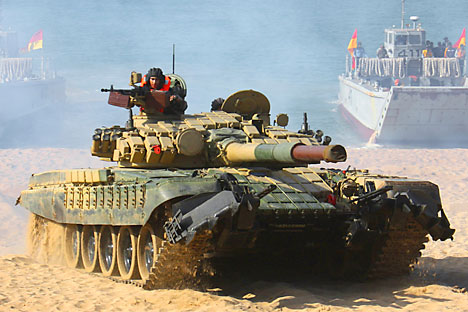 The interests of Russia lie in maintaining a partnership and, if possible, friendly relations with other global players, while not being bound by any obligations.

Joint Russian-US-Norwegian Northern Eagle-2012 exercises have ended in the Barents Sea. This kind of joint Russia-NATO exercises have become regular, but what do this military cooperation with a former and potential adversary mean?

At present, the Russian Navy is far behind that of the USSR in the number of ships with good fighting capacity. A huge number of ships, both old and up-to-date, were written off without any replacement in the 1990s-2000s. At the same time, Russia’s gradual reinstatement in the international arena requires an adequate instrument to protect the country’s interests everywhere, including remote regions. In this respect, the role of the Navy cannot be overestimated.

The current number of ships is sufficient for performing anti-piracy duty in the Gulf of Aden and for periodical appearance in important parts of the world ocean to demonstrate the Russian flag but keeping ships in areas vitally important for Russia’s interests on a permanent basis is beyond Russia’s potential so far. Nevertheless, the currently made efforts allow to solve many problems.

We can seriously talk about our aspiration to build an effective military alliance only in the case of Russia’s joint military exercises with the member-states of the Collective Security Treaty Organisation (CSTO) controlled by Russia. Russia considers the CSTO to be an instrument for the defence of the alliance’s member-states’ security. Exercises with NATO, China and other countries have a different goal, which is to find an opportunity for joint actions and common interests in the key regions, which could be the basis for further dialogue.

One of such common interests is ensuring safe navigation in Arctic waters. During the drills, Russia and Norway practiced interoperability between the rescue and coordination centre in the Russian port of Murmansk and a similar centre in the Norwegian port of Bodo.

The Northern Eagle exercises are an example of how yesterday’s adversaries can find common ground. The interests of Russia in this particular case lie in maintaining partnership and, if possible, friendly relations with other global players, be it NATO or China, while not being bound by any obligations.

Judging by the increasing number and scale of joint manoeuvres, this policy is gaining momentum. It remains to be seen what area of cooperation will ultimately prevail and when they will do so.