A flutter in Central Asian steppes 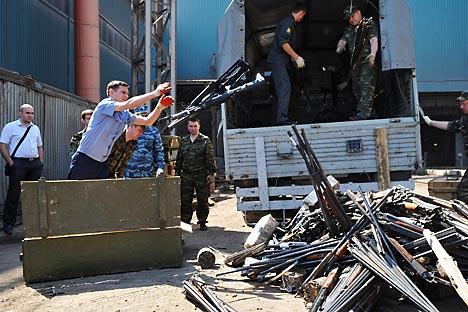 From all appearance, the steady 'militarization' of Central Asia got rudely interrupted this week by a path-breaking legislation which Uzbekistan enacted Tuesday, banning military bases on its territory. Source: RIA Novosti

The range of expressions on the face of the big players on the Central Asian arena shows that there is extreme wariness about what they could be getting into.

From all appearance, the steady 'militarization' of Central Asia got rudely interrupted this week by a path-breaking legislation which Uzbekistan enacted Tuesday, banning military bases on its territory. Indeed, the militarization of the Central Asian region without Tashkent willing to play a central role in it will be akin to staging Shakespeare's Hamlet without the Prince of Denmark. Thus, can we say a drove of lily-white doves just were released into the blue skies above Tashkent this week by President Islam Karimov?

Things are never quite what meets the eye in the steppes. Even Genghiz Khan knew that the steppes held dark secrets when he took a sly detour through the Kizil Kum and Kara Kum to surround ancient Bukhara rather than take it, as the Emir thought he most certainly would, through frontal assault.

The range of expressions on the face of the big players on the Central Asian arena shows that there is extreme wariness about what they could be getting into.

The United States kept a poker face to declare that it never really contemplated setting up military bases on Uzbek territory anyway. Factually, this must be a correct statement, because the statement has been made at a reasonably responsible level.

But facts may nonetheless belie real feelings and longings. That seems to be precisely what worries Russia, when it broods whether a military base cannot after all be called by some other name. The Uzbeks, in particular, are an ingenious people and Russia knows that better than any other nation.

On its part, China seems to take the report drifting in from Tashkent at face value. No comments so far. But then, it is improbable that the Uzbek legislation frustrates any Chinese game plan as such. Instead, what interests China will be how it might affect the US and Russia, and whether it would creates more space (“level playing field”) for Chinese diplomacy in time future.

Ideally, “Atlanticists” in Moscow would have preferred a quiet deal with Washington, without anyone knowing, to show the Uzbeks the door out into the cold and make them realize the limits to playing off one great power against yet another great power. But Washington isn’t thinking on those lines. It may well a score to settle with both Moscow and Beijing by consolidating its strategic presence in the Central Asian region, of which Uzbekistan is a key country.

Meanwhile, Tashkent of course is having the last laugh. It is reassuring Russia while shifting the goal post in the game with Uncle Sam and with one eye winking at China. And all this while it keeps guessing all three protagonists what is really going on in the Uzbek mind. The Uzbek mind cannot be a blank page, after all.

In terms of the language of the bazaar, Tashkent is ‘retendering” the contract. Will there be any takers? On balance, these revised tender terms would suit the United States more. They keep “out” the Collective Security Treaty Organization – and, arguably, Shanghai Cooperation Organization as well – while the US and the North Atlantic Treaty Organization lose nothing.

Blake is absolutely right insofar as the Pentagon is not really looking for military bases. For the conceivable future, “lily pads” will do. They would more than serve the purpose for the present while “The Moving Finger writes; and having write, Moves on”, as Omar Khayyam wrote – simply put, until a regime change takes place in Tashkent. Read the complex story in the CSM here.