The wonderful world of Russian superstition 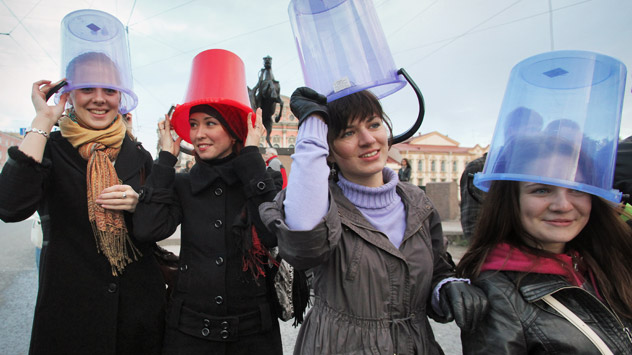 Superstitious beliefs are an essential part of Russian life and are accepted by people belonging to all strata of society. Source: ITAR-TASS

Despite centuries of Orthodox Christianity and decades of Communist Rule, Russians are not ready to shed the superstitious beliefs from the country’s Pagan past.

When I accidentally stepped on a Russian friend’s foot for the first time, he returned the favour within seconds.  After being questioned on the “rapid” reaction, he said it was to ensure that the two of us don’t get into a fight in the future!  This was my entry into the world of Russian superstition. This “rationalist” insisted that he lost many a friend simply because he stepped on their feet at some point or the other. Coming from a country where people’s superstitious beliefs can drive a “real rationalist” insane, I laughed at his belief that a 5-year long friendship could be broken because of me stepping on his foot. Such types of superstitious beliefs are common in Russia.

Many people in Russia believe that friendships can be broken if people who have their gloves on shake hands. Imagine taking off your gloves on a bitterly cold day when temperatures fall 30 degrees below zero just so that you can shake a friend’s hands! Since friendship is very vivid in Russia, many people I know refuse to shake hands with their gloves on.  A bit of frostbite is better than losing a real friend!

Superstitious beliefs are an essential part of Russian life and are accepted by people belonging to all strata of society. A close friend of mine once told me that his pocket was picked because he came back to his house after forgetting something and did not look at the mirror! “If I looked at the mirror after I came back home, I am sure that I would have had a better day,” he said. As irrational as I found this belief, I came to understand that most of my Russian friends shared such views on re-entering the house after forgetting something and not looking at the mirror.

Then there are those who believe that travelling on a Monday can either bring bad luck or prolong the voyage. An acquaintance going to Thailand on a Monday had to deal with a series of cancelled flights and came back home almost a week late. He insisted that flying out on Monday caused his delays! He wasn’t willing to see reason when I told him that many of those who suffered from a cancelled flight on their way home didn’t take a flight away on a Monday!

Russians also believe that shaking hands or passing an object over an open door can bring bad fortune. This doesn’t mean that Russians step outside their home to take the pizza from a delivery man, but usually, friends don’t shake hands or pass on something through doors.  The problem with such beliefs is that they affect the psyche of the most rational of people. Broken friendships are often attributed to stepping on the feet or handshakes through doors.

The Communists managed to incorporate some Pagan beliefs into their way of thinking.  For example, the Soviet and Russian obsession with secrecy comes from an old superstitious belief that revealing plans or showing too much about a place, may invite bad fortune.  Russian people guard secrets like their lives depend on it. There is also a belief among many Russians that revealing good plans or intentions might ruin them. The cure for this is to spit in wood thrice or mimic the action three times.  Russians believe that this is the best way to ward off the evil eye.

It’s a well-known fact that Russian cosmonauts like to watch the classic Soviet film “White Sun of the Desert,” before flying into outer space. There are several stories doing rounds on the internet about Russian cosmonauts urinating on the tire of a trailer before each launch. This is allegedly something Yuri Gagarin did before his historic flight into space.

For those who are afraid of staying single, rule number one in Russia is to avoid sitting in a corner seat. This allegedly ensures a life of unmarried bliss! This belief was initially applied just for women but later caught on even with men, some of whom no doubt pick a corner seat on purpose!

Birthdays are a huge occasion in Russia and are celebrated in great style, but generations-old beliefs call for well-wishers to wait until the birthday to wish someone. While wishing someone later is acceptable, congratulating earlier may result in some kind of bad fortune for the birthday person. Wishing someone even a few minutes before midnight could bring bad luck and bad health, as the legend goes.

Most Russian superstitious beliefs revolve around friendships and the dangers of losing them. I remember gifting a hunter a special knife for his birthday and seeing an element of surprise on his face. Gifting a knife to this friend would have allegedly turned him into an enemy. The prospect of having a 6 ‘4”, 110 kg person as an enemy didn’t appeal to me, but there was a solution on hand. He just had to give me a symbolic amount of 10 roubles and that was enough to stop us from becoming enemies.

Many Russian friends of mine laugh at me for accepting some of these beliefs and mock me for being more “Catholic than the Pope.” These people who have been my friends for several years have stepped on my feet a countless number of times, gifted me knives and have insisted on shaking my hands with gloves on, just to disprove what some of them call “stupid myths.”

At the end of the day, it boils down to individual beliefs.  A former colleague who saw a nasty neighbour as he stepped out of his apartment on his wedding day took it to heart that this was a bad sign. The couple were together for 5 years before getting married, but ended up divorced after 6 months of anything but marital bliss. To this day he insists that his wedding was jinxed by the mean man who lives on the fourth floor!