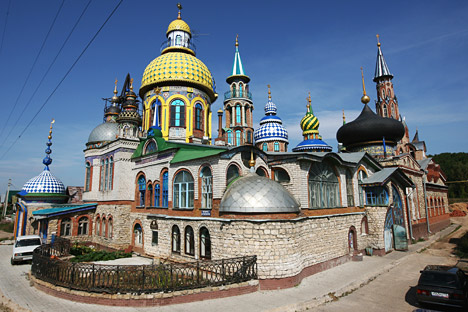 The Temple of All Religions near Kazan consists of different types of religious architecture including an Orthodox church, a minaret, and a synagogue, among others, symbolising diversity of religions in Russia. Source: Maksim Bogodvid / RIA Novosti

For the first time, Russian sociologists have compiled an atlas of Russia’s religions.

Ahead of the presentation of this unique project, which was organized by the research service Sreda and compiled from poll data conducted by the Public Opinion Foundation (FOM), curator Roman Lunkin gave an interview to the Ogonyok correspondent Olga Filina.

Ogonyok: You say that your Atlas is the first project of its kind, and yet surveys of religiosity in Russia are conducted on a regular basis. What has your team done that is new?

Roman Lunkin: For the first time, separate polls concerning a person’s religion and world view were conducted in every region of the Russian Federation. What is also new is the way in which the questions were formulated: in the past no one thought it was necessary to ask people about their particular denomination of Orthodoxy; was it Pentecostalism, say, or an Eastern spiritual type? If you look at world practice, then our Arena project, part of which is the Atlas of Russia’s Religions, has at least two foreign analogs: the European Values Survey, which is part of the World Values Survey, and the Pew Research Center in the United States, which regularly compiles indices detailing the religious make-up of different states. We are trying to do something similar, to the extent that we are able, that takes into into account Russia’s particularities.

Ogonyok: Have you managed to prove that there are enough “originals”* to make it necessary to consider them?

R.L.: Of course these represent a small percentage of the overall population, sometimes within the margin of statistical error. But if you combine opinion poll findings with other factual material (field research by the Russian team at Oxford’s Keston Institute, open data bases at the Ministry of Justice, at Rosstat), then it is possible to understand which numbers fall within the margin of error and which represent real believers and the real situation in a region. Our Atlas aims to destroy the stage setting “Russia”, the myths and stereotypes, and to show instead the actual, living and highly diverse country that it is.

Ogonyok: Is that stage setting called “Russia” by any chance “Holy, Orthodox Rus”?

R.L.: The myth that 80-90 percent of Russia’s population is Orthodox is just one aspect of the generally superficial view of religious processes here. By our calculations, the number of Orthodox Christians in Russia is half that — 40 percent on average, in different regions of Russia. And of those, only 5 percent said they were parishioners in a specific parish and went regularly to church. These findings in no way diminish Orthodoxy’s role in Russia, they simply give one a real idea of the size and nature of the congregation of the Russian Orthodox Church.

Ogonyok: The Gallup Organization recently published a survey of religiosity in the world that showed the number of believers to be declining. As compared to 2005, the number has decreased by 20 percent in France and by 13 percent in the United States. In Russia the decrease has been less significant, only 2 percent, but that is the direction things are going in.

Do these observations coincidewith yours?

R.L.: When you ask a person who believes in God but does not profess a particular religion whether or not they believe in God, they will most likely say that they do not. Our findings coincide with Gallup’s in that the role of traditional, ethnic religions in the life of society does appear to be diminishing. On the other hand, the role of faith is not shrinking, it is even growing. In the last 20 years of religious freedom in Russian, following the collapse of the Soviet Union, a typically European religious variety has taken shape, with an abundance of different possible paths for those who want to find themselves. In the lists kept by the Ministry of Justice, the number of non-Orthodox, Christian organizations is second only to the number of Russian Orthodox Church organizations, and greater even than that of Muslim organizations.

Ogonyok: Islam is also a traditional religion. Is its congregationshrinking?

R.L.: In Muslim regions of Russia, young people’s interest in Islam is supported. Moreover, the congregation is amplified by migrants — this is no secret. It is, however, worth noting that 10 percent of Russian Muslims, who are neither Sunnis nor Shiites, are wary of such migrants.

Ogonyok: I was interested to learn that 44 percent of those who profess the “traditional” religion of their ancestors are Russians. And in central Russia you found not only Buddhists but also adherents of Eastern religious practices. Do you attribute this to a trend in nontraditional religions?

R.L.: In Russia there really are Slavic neo-pagans — people who take the “traditional religion of their ancestors” very seriously. Some are interested in the ideas of the New Age movement — various mystical practices in which there are elements of paganism, as well as of Eastern beliefs, astrology, theosophy, and Roerich’s teachings. In our survey, Russians who seek the “true faith” (not necessarily members of specific confessions) wound up in the same cohort as those who are shamanists, because of belonging to indigenous populations in Yakutia or, for example, Altai. There are Buddhists in Moscow and in St. Petersburg and in Kaliningrad: this is probably a result of the intelligentsia’s traditional interest in the East.

On the other hand, faiths that are considered “antiquated” by mass consciousness, such as the Old Believers faith, are not only alive, but thriving. When speaking of Old Believers, we tend to show dying villages that by some miracle are managing to preserve traditions that no one needs. For the expert, of course, this is nonsense: in fact, some 40 percent of Old Believers today earn in excess of 20,000 rubles a month, 26 percent live in cities of a million or more inhabitants, while 15 percent run their own businesses. Old Believers remain a very energetic and industrious group, one that attracts young people. The powers that be and the mass media, the Russian Orthodox Church and society will have to realize that in Russia, along with “traditional” churches, new churches are springing up, while old ones are being invigorated. Our religious map is too diverse to be painted in just one or two colors.

*“Originals” refers to poll responses that answer the question of denomination in any way other than “I am Orthodox”, “I believe in God”, or “I do not believe in God”.

More information about the survey can be found at research service Sreda web-site.