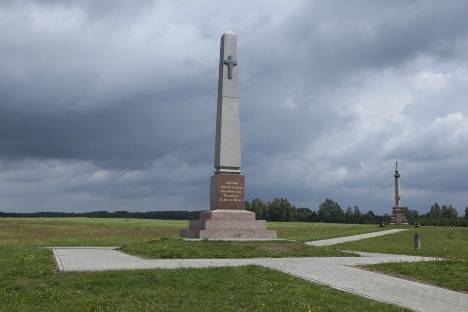 A little while ago, RBTH Correspondent Alberto Caspani reported on the sights and sounds around Borodino, as the village prepared to open celebrations on the 200th anniversary of the battle with Napoleon.

The first assault was a real mockery. Just about ten steps away from the tracks, an electric train for Borodino slyly salutes the Belorusskaya station as it departs exactly on time. It is 7:41 in the morning in Moscow. In spite of waking at such an early hour, onlookers realize that the battlefield must wait, just as it once continued to elude the 600 thousand soldiers of the Grande Armée eager to fight the czar's ghost troops. An hour later there is news that the train is on the line again, but suspicions of a Russian civilian foil the second attempt at hooking up and, before amazed stares, another escape takes place undisturbed on the opposite track. Borodino: so near, yet so far.

It is best not to lose heart: on the long march approaching the heart of Russia, Napoleon himself had to sustain simple skirmishes, first at Wilna, then at Vitebsk, and on and on until the most remote Smolensk.

View the gallery: Large-scale reconstruction of the 1812 war took place in the Smolensk Region

Even 200 years after the bloody clash that darkened the star of the last Emperor of Europe, the fiends and marshes at the gates of the capital still seem bewitched for anyone coming from abroad. From the Mozhaysk station, where most of the trains terminate, one almost doesn't notice being catapulted directly onto the front line; the road that links the town of Borodino with its small train station takes us past country houses immersed in surreal bucolic peace. An elderly lady walking slowly towards a well to fetch water. Children intent on playing hide-and-seek behind trees. Sparrows puzzled by the sight of rare visitors.

Then, all of a sudden, granite memorials straight as riflemen appear at the sides: one, two, three... All we have to do is look around to feel that we have been surrounded, without even realizing it. Some of the granite structures push themselves up to the edge of the road, which traces the exact dividing line between the Napoleonic deployments and those of the czar; many others make strange geometric designs in the fields, returning life to the contingents of the heroic Bagration or the cautious Murat.

There is a lot of confusion. Once off the road, plants and swampy terrain make it difficult to move around. We have to get just a few inches from the memorials to understand the division they represent, but it is a long walk out into the open in order to do so. This would inevitably involve exposing oneself to enemy fire. At times there is the screeching of a blade against marble; other times there is the repeated striking of a pneumatic drill.

Borodino Panorama: the trail of Napoleon

Scale model of the Borodino battle will be exhibited in London

In Borodino work is hurried, in preparation for the holidays – September 1-7, 2012 – and the commitment to forging paved pathways or signposts inevitably has something martial about it. The workmen shout to each other this way and that, make gesticulations, move in groups or crouch under the plants: they speak only in Russian. No foreign language accompanies the advance towards the front: maybe the Napoleonic troops have taken shelter from the repeated artillery strikes elsewhere. Maybe the tourists are awaiting the great event to reveal themselves.

Where an obelisk points the way to the French Emperor's headquarters, at the intersection of the street that leads from Semyonovskoe to Shevardino, ladders and scaffoldings support the remains of the Saviour's Monastery. The earth is dug up and the cranes work hard all around the building, which has by now been turned into a museum.

The restoration works speak of bombardments much better than the torn uniforms: not one lot seems to have avoided the violence of time, including the remains of the Grande Armée. While the gold cupola of Bagration's tomb now shines again, exalting the marshal's heroic sacrifice that covered Kutuzov's tactical retreat, the collection of funds to preserve the memory of the Napoleonic divisions is turning out to be much more difficult. In spite of the fact that the invading troops also had volunteers from all over Europe, from Belgium to Prussia, from Austria to Italy, preparation for the anniversary of the battle at Borodino has revealed just how fictitious the unity of the western nations led by Napoleon really was.