Foxhound vs Blackbird: How the MiGs reclaimed the skies 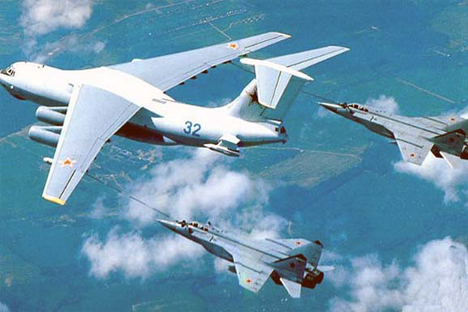 Exactly 30 years ago a potent new combat aircraft appeared in the skies over Russia. Without firing a shot in anger, the MiG-31 achieved what Soviet air defence had been attempting for years – send the SR-71 spy plane into early retirement.

From its first flight in 1972 to its retirement in 1989, the SR-71 Blackbird was the highest flying and fastest air breathing aircraft in operation. Flying at Mach 3.3 (4042 kph) the CIA-operated SR-71 initially flew unchallenged over trouble spots such as Vietnam and the Middle East, and also conducted highly provocative flights close to the Soviet Union’s borders, spying on submarine activity in the Arctic seas.

Although the Mach 3.2 MiG-25 Foxbat could in theory have shot it down with its air to air missiles, in reality the Foxbat could not sustain a Mach 3 chase for long.

Early in the year 1982 the Mikoyan-Gurevich bureau started deliveries of a new combat aircraft to the Protivo Vozdushnoy Oborony or PVO – the Air Defence Forces of the Soviet Union. This new aircraft was the multi-functional MiG-31– an airborne weapons platform with the principal task of hunting down US Strategic Air Command (SAC) bombers and stealthy, low flying air-launched cruise missiles (ALCMs). According to the authoritative defence website, Air Power Australia, the Foxhound’s unique ability for sustaining supersonic cruise up to 722 km, increasing to 2200 km with inflight refuelling, “is a capability with no equivalent in the West”.

In September 1983, a Korean Air Lines Boeing 747 was shot down by a Sukhoi-15 after the airliner intruded deep into Soviet air space. What remained unknown to the world was the night of the incident had been a particularly tense time for Soviet air defence forces, as the SR-71 was conducting a spy flight in coordination with other American aircraft and a Big Bird spy satellite.

German aviation journalist Stefan Buttner has given a gripping account of what happened next, in the October 2010 issue of the magazine Combat Aircraft: “Following the event, a special-purpose group comprising four MiG-31s under the command of Vladimir Ivlev, was despatched to Sokol Air Base in Sakhalin later that month.

“The group's main task was to combat incursions by the SR-71. With Moscow's authorisation the four crews set up demonstrations sorties with the new aircraft, using their radar to prevent the Blackbird from flying along the Soviet border.

At this point the SR-71's missile approach warning system would trigger; the crew would find themselves the hunted, and unable to hold their nerve, there was no course of action for them other than to engage afterburner and run for home.

Prior to that, says Buttner, a squadron in Monchegorsk Air Base near the Arctic port of Murmansk had been equipped with the MiG-31, at the end of April 1983 and the first MiG-31 sortie scrambled against an SR-71 on the following day. The Monchegorsk MiGs were assigned the task of intercepting the SR-71s flying in from the UK’s Mildenhall Air Base.

Captain Mikhail Myagkiy was among the elite fighter pilots chosen to fly these new MiGs. Over a period of four years, Myagkiy alone executed 14 successful intercepts of the SR-71 near the borders of the Soviet Union in the far north.

The spy plane usually appeared from the direction of Norway, tearing in toward the White Sea and then north toward Novaya Zemlya before turning around on a reverse course to the west over the Arctic Ocean.

It must be mentioned that the missile defence forces possessed the capability to successfully destroy the 'intruder'. In an interview to Russian aviation expert Valery Romanenko for Paul Crickmore’s gripping book Lockheed Blackbird: Beyond The Secret Missions, Myagkiy says Soviet counter-intelligence secretly hoped the American plane would cross the borders. For, that would have given them the perfect excuse to shoot it down with SAMs.

Myagkiy says intercepting a superfast aircraft like the SR-71 required precisely coordinated actions. “The scheme for intercepting the SR-71 was computed down to the last second, and the MiGs had to launch exactly 16 minutes after the initial alert. During this period of time the ground vectoring station determined what route the SR-71 was following,” he says.

On his eighth intercept, on January 31, 1986, here’s what happened: “They alerted us for an intercept at 11.00. They sounded the alarm with a shrill bell and then confirmed it with a loudspeaker. The appearance of an SR-71 was always accompanied by nervousness. Everyone began to talk in frenzied voices, to scurry about, and react to the situation with excessive emotion.”

Taking off with Aleksey Parshin, his Weapons Service Officer, their aircraft broke the sound barrier at 26,000 ft. At 52,000 ft, the MiG achieved infrared lock on the SR-71 and a target indicator showed the distance – 120 km – in the head up display. The aircraft’s computer automatically fed the data to the missiles, and four green triangles appeared on the target illuminated in the head-up display. A computerised female voice named Rita inside Myagkiy’s earphones announced – “Attack”.

At 65,676 ft the computer announced the “Attack” order again. The Blackbird was flying a mere 8000 ft above him and Myagkiy had a visual sighting of the aircraft. “Had the spy plane violated Soviet airspace, a live missile launch would have been carried out. There was practically no chance the aircraft could avoid an R-33 missile,” says Myagkiy.

The intercepts had their intended effect. The SR-71’s missions were now planned farther from Soviet airspace because of the MiG threat. Renowned film maker Peter Ustinov also confirms this outcome in his documentary Wings Over Russia.

Swedish air defence had a vantage view of these aerial manoeuvres. On their radar screens they could see the much older but faster MiG-25 screaming in towards the Blackbird. Shortly after the MiG-31s had harried the SR-71 in the Arctic area, a lone MiG-25 Foxbat stationed at Finow-Eberswalde in the former GDR would intercept it over the Baltic. The Swedes observed the SR-71 would always fly at 72,000 ft and the MiG-25 would reach 63,000 ft before completing its stern attack 2.9 km behind the Blackbird. “We were always impressed by this precision, it was always 63,000 ft and 2.9 km behind the SR-71," a retired Swedish Air Force flight controller told Crickmore.

However, the Soviet brass weren’t satisfied. They wanted the SR-71 out of the skies entirely. By now, the success achieved by MiGs had given a boost to the Foxhound programme. One by one the forward air bases of the country were beefed up with the new fighter. In October 1986, MiG-31s were despatched to the Komsomol'skii Air Base. In 1985, Archangel and Kamchatka got upgraded to the MiG-31. Yugorskii Peninsula in the White Sea and Semipalatinsk in Kazakhstan got theirs in 1986.

The Soviets now raised the stakes. On June 3, 1986 they sent up not one but six MiG-31s to intercept the SR-71 over the Barents Sea. The six Foxhounds performed a co-ordinated intercept that would have subjected the SR-71 to an all-angle AAM attack.

The intense pressure paid off – the SR-71 never came close to Soviet borders after that incident. Just three years later the spooks at the CIA cancelled the SR-71 programme (although it was reactivated briefly in other theatres).

The premature retirement of the SR-71 seems mysterious but not if you look at the MiG-31’s record against it. However, Western military commentators have said the SR-71 became redundant after the arrival of powerful spy satellites. This argument has no legs. Satellites have orbital limitations and it may take up to 24 hours to position a satellite over a certain area, whereas spy planes can be brought into play quickly and repeatedly.

Also, strange as it sounds, spy planes are stealthier than satellites as orbital information is freely available on the internet so the enemy can hide assets when they know the satellite is overhead.

Indeed, the limitations of satellites were exposed when the U2 was brought out of retirement to operate over Iraq.

Air Power Australia says given the Foxhound’s principal role was the hunting down of SAC bombers and ALCMs, it is questionable whether the aircraft is relevant in a radically changed political environment.

But until the new Russian fifth generation PAK-FA becomes available, the MiG-31, with its massive radar and unique ability to engage six enemy aircraft, is the perfect solution to a uniquely Russian problem – covering its vast air space with limited aircraft.

In fact, after a major upgrade the MiG-31 is even more potent today than it was 30 years ago. It is a measure of its mystique that the MiG-31 was the inspiration behind the Cold War novel Firefox, which was later made into a hit motion picture of the same name starring Clint Eastwood – another ageless wonder.

Stranger Than Fiction RIR Blogs Fall of the USSR