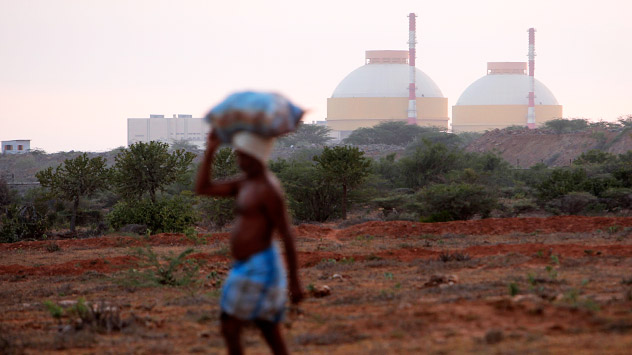 India signed a contract with the Soviet Union to build the Kudankulam plant in 1988, while the actual construction started only in 1997 due to due to the political and economic upheaval in Russia after the collapse of the Soviet Union in 1991. Source

After winning the case in the Madras High Court, the Russian-built nuclear power plant may start power generation this month.

The Madras High Court on Friday ruled in favour of the Kudankulam Nuclear Power Project saying that it saw no illegality in its implementation. The court dismissed several petitions calling for the cancelling or postponement of the project. “Interference by the court in policy decisions, which are for the benefit of the public, is against the public interest,” The Times of India quoted the judges as saying in the verdict.

Public interest litigations were filed by NGOs and individuals, seeking a fresh and transparent review of the project and postponement of the plant's commissioning till all the mandatory safety measures are put in place, according to the Times of India. The paper added that the Nuclear Power Corporation of India is planning to operationalise the plant in September but did not give a specific date.

The so-called People's Movement Against Nuclear Energy, which is behind the agitation against the plant, will approach the Supreme Court, according to the report. The movement’s coordinator S P Udayakumar was quoted by the paper as saying, “We will continue our fight for justice.”

The Madras High Court in its 281-page judgment supported the Indian Government’s stand on the project. “When it comes to technical aspects of the project, we have to reiterate that when a major study has been done, as seen in the voluminous reports of various authorities like the Atomic Energy Regulatory Board (AERB) and the Union ministry of environment and forests, it is not known as to how this court can substitute its own view. For, this court is neither an expert nor competent to make a scientific study or recommendation. Prima facie, we are satisfied that the adequate safety measures have been taken,” the judges said.

According to the Times of India report, the judges added that the public apprehension flowing from nuclear accidents of Chernobyl and Fukushima had been dispelled by experts. “In a project of this nature, there is certainly a public fear involved. Simply because there is a remote possibility of an event happening, it does not mean that the very project becomes useless,” the judges said in the verdict Rejecting pleas for fresh public hearings, the bench wondered, “We do not understand as to what purpose the public hearing will serve in respect of an existing project.”

The project involves 1,000 MW reactors of the VVER-1000 model being constructed by the Nuclear Power Corporation of India Limited (NPCIL) and Russia’s Atomstroyexport company, a Rosatom subsidiary.