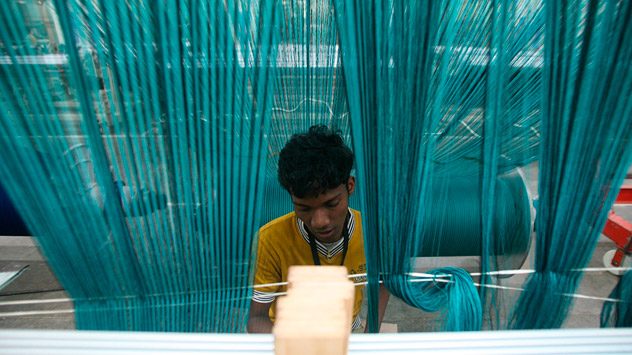 It is much cheaper for the local businesses to invest in imported labour than to in local personnel. Source: Reuters/Vostock photo

14 Indian workers have been hired to work in a factory in Vladikavkaz for a company that makes high-end furniture.

The first group of migrant labourers from India has started working in Vladikavkaz, the capital of the Russian region of North Ossetia. 14 semi-skilled workers are being employed by Russian high-end furniture maker Rokos.

The workers work in shifts at the factory that uses German and Italian machinery. Rokos sells “elite furniture” in 69 Russian regions from Irkutsk to the Leningrad Region. The company, on its website, says its high-end products are “almost like Italian furniture.”

250 employees are on the payroll of the company, which has a market capitalization of almost 1 billion roubles. However with many employees approaching retirement age, the furniture-maker faces an acute staff shortage. Labourers from India have been hired to help fill the vacancies.

The Indian workers are provided with a hostel with decent facilities, including three meals. After an initial period of training, they will work on grinding, upholstery and painting among other operations. According to their Russian colleagues, “they are diligent, well-behaved and accustomed to saving money.”

The workers are happy with their current monthly salary. The Russian colleagues add that the workers are eager to learn as much about the furniture craft as possible.

“When they come back to the hostel after the shift they watch their favourite melodramas,” a Russian colleague says. “They save on everything; they save money for their families in a distant homeland.”

The workers have not learned the Russian language yet but it does not affect the quality of their work. “You do not need tell them anything, you just have to show them,” the director of Rokos, Fatima Gobeeva says. “Unfortunately, when local young people hear that they need to undergo training, their interest in the work immediately disappears, Gobeeva says. “And it is much easier with foreign workers; they are disciplined, like learning and do not engage in conflicts.”

There are plans to hire more migrant labourers from India. The quotas have already been approved in Moscow, Gobeeva says. “Nobody wants to work here, she adds. “We need technicians, mechanics, engineers and other specialists. My fellow countrymen prefer to register at the labour exchange and receive unemployment benefits… Some of them do not like the noise and dust, others lack the discipline and many won’t work for a low salary.”

The company offers a maximum salary of 15,000 roubles (around US$ 500) in job ads. The director says that unemployed lawyers and economists came to the factory but they could not take up ‘non-prestigious’ jobs. “They wouldn’t want a blue-collar job or would insist on a salary of 45,000 roubles just to be a painter,” Gobeeva says.

“The young people of Vladikavkaz ignore the profession of a furniture- maker and prefer to go to Sochi and Moscow for easy money,” according to Gobeeva. The search for the labour in North Ossetia often ends with the phrase: “I won’t step out of the house for a salary of 15,000 roubles.” As a result, the vacancies are slowly being filled by migrant workers. Next year they are going to invite 130 labourers from India and 25 from China.

It is much cheaper for the local businesses to invest in imported labour than to in local personnel. Experts agree that the simplification of the visa regime between Russia and India can lead to a significant increase of planned Indian labour migration.

According to Alexander Apokin from the Centre for Macroeconomic Analysis and Short-Term Forecasting, Russia can provide a few hundred million people with work and since there are human resources in India, it will be help both sides.

Tatiana Shaumyan, director of the Centre for Indian Studies at the Institute of Asian Studies, says that a simplified visa regime works well in the Far East with regard to the Chinese who bring capital and people and are known to be hard-working. Shaumyan, however, believes that the simplified Russian visa regime with India only helps Indian businessmen, with Russian visas being prohibitively expensive for ordinary citizens.

Istoki analyst Andrew Bliznets cautions against unrestricted access into Russia for Indian labourers. “There are several expert demographers who, for years, lobbied for the attraction of migrants from the Caucasus and Central Asia,” says Bliznets “Due to a visa-free regime between our countries, every third worker in Russia is Tajik, every fourth is Armenian.”

“The dominance of migrant workers annoys many Russians, Bliznets says, adding that “migrant labour from the former Soviet republics will not cause a demographic disaster.” He believes that a large migration of Indian labourers may upset the demographic balance in some Russian regions.