Shared history between Russia and the UK celebrated in London 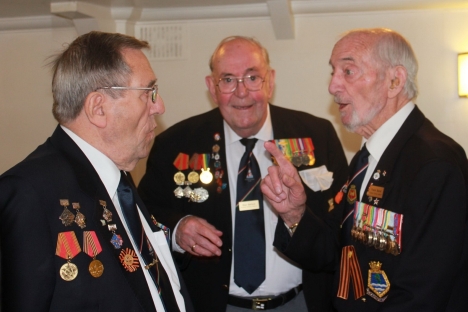 On August 31, 1941, the first Arctic Convoy, codenamed Operation Dervish, arrived safely in Arkhangelsk, Russia. Exactly 71 years later, British veterans gathered at a reception aboard HMS Belfast in London. This was an occasion to honour the bravery of the sailors involved in those convoys, commemorate those who did not return and celebrate the cooperation between Soviet and Allied forces.

To the crowds of Friday-night drinkers lining the Southwark riverbank, it must have been clear that something was afoot aboard the battleship; the deck was alive with the sound of wartime music and the delicious smell of barbequed meat wafted across the water. The veterans entered into the spirit of things with an infectious joie de vivre. At 90, veteran Stan Ballard was still the life and soul of the party. After the first toast, he silenced the assembled crowd with a moving rendition of “The Way We Were”. This was followed by a violin recital of songs from the 1940s, all to the accompaniment of much applause, toasts and “Up Spirits.”

It is impossible to underestimate the role of the Arctic Convoys in the outcome of the war. On July 1, 1941 Hitler launched Operation Barbarossa— a plan to invade the Soviet Union. Churchill responded with a statement saying the allies would “do everything to help that time, geography and our growing resources allow”, and on July 12, 1941, he signed a mutual assistance pact with Stalin. By July 21, 1941, the Dervish Convoy was ready to set sail from Hvalfiourdour in Iceland, loaded with vital supplies that included 15 Hurricane fighters, 10,000 tons of rubber and 1,500 tons of army boots. Subsequent convoys went on to deliver almost a quarter of the Red Army’s supplies.

Many of the veterans at the London event on the HMS Belfast had been directly involved. One of them was Gordon Long, who recently received an MBE for his wartime services and contribution to Anglo-Russian relations. His ship was anchored in a Russian port for 10 months when the British Navy was called in to transport timber, so he had a chance to venture ashore. He remembers loudspeakers in the streets would play the same repetitive mix of songs and Soviet slogans every day, but luckily some musicians from his team managed to trade cigarettes for instruments. From then on, dances in the local community hall acquired a legendary status, with girls coming from far and wide to enjoy the music. It is testament to the veterans’ upbeat attitude that they remember good times like these, but overall the experience was harrowing; Jimmy Potts, a former air gunner, will never forget how lucky he was to survive. Frank Bond, now 89, recalls bitterly cold conditions and towering waves. He and other veterans have since been back to Russia several times and are planning their next trip in September of this year.

Event organiser Eugene Kasevin has made it one of his life missions to ensure the convoys are remembered. He sees the lasting legacy of Operation Dervish as an important link between Russia and the UK – “despite all the misunderstandings, be they political, media-related or otherwise, the shared history between Russia and Britain remains one of our strongest bonds. Our successful collaboration in the fight against Hitler is part of the common heritage of both countries, and this needs to be celebrated and cherished.”