What awaits investors in the Far East after APEC 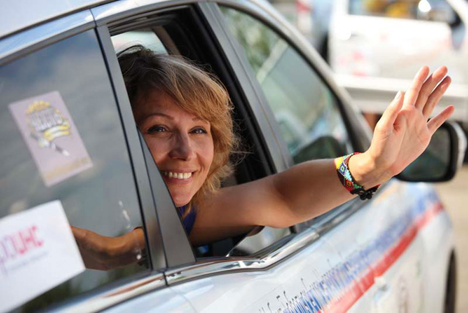 Billions of dollars in government investment has paved new roads in and around the port city, constructed two impressive bridges, and brought natural gas from thousands of kilometers away to power local electricity plants all timed for the APEC forum

Several developmental projects await Vladivostok and other areas in the Russian Far East as Moscow wakes up to their strategic importance.

As Asia-Pacific leaders descended on Vladivostok for this weekend's summit, they closed the chapter on one of the biggest efforts to develop Russia's Far East.

Billions of dollars in government investment has paved new roads in and around the port city, constructed two impressive bridges, and brought natural gas from thousands of kilometers away to power local electricity plants all timed for the Asia-Pacific Economic Cooperation forum.

But further measures to stimulate the economy of the vast region are likely in the pipeline. Where the construction for the APEC meeting left off, the recently created Far East Development Ministry could pick up in a bid to attract more investment.

Formed with the new Cabinet in May, the ministry has been getting itself together for the last few months and is likely to set about fulfilling its mandate soon.

As yet, it has been tight-lipped about its plans. Ideas have been popping up, however, for making the vast but sparsely populated area a magnet for private money.

"This is the only way for us to get serious development," he said at a meeting dedicated to the Far East, chaired by Prime Minister Dmitry Medvedev in July. "Where there are roads, there is life."

Former and present business leaders have pushed another agenda. The government must announce tax breaks and rebates for any new businesses in the Far East, said Pavel Maslovsky, a Federation Council senator who formerly worked as a mining director in the region.

"The solution is to create a special economic zone for the entire Far East," he said. "A special taxation regime could drive the economy forward."

One of the heaviest burdens, the profit tax, needs to disappear altogether for a while, he said.

"It should be a total zero," Maslovsky, who led the Petropavlovsk company, said in an interview. "Why be petty about this?"

Investors in a new Far Eastern enterprise could use breaks for the value-added and property taxes, he said. The social tax, charged on the payroll, could stay, but at a lower rate.

"As a former executive of a metallurgic company, I know that would give a strong push to the things there," Maslovsky said.

Given these conditions, private companies could bankroll construction of some of the required roads and power lines to remote natural-resource deposits, rather than wait for the state to make these basic investments, he said.

Maslovsky mentioned the need for a rail connection between Magadan and the country's railway system. There's also demand for greater capacity of the one-track Baikal-Amur Railway. Companies use the railway to transport coal, timber and other resources, mainly for export from the Pacific coastal ports.

State-owned monopoly Russian Railways is upgrading the link, seeking to handle at least 24 million metric tons of cargoes there, or double the current flows. The Trans-Siberian Railroad, where cargo trains now travel as often as those in the Moscow subway, is also in need of improvement.

Some firms, such as the Siberian Coal Energy Company, also known by its Russian acronym SUEK, have pushed for tax breaks in their own industries. Its chief, Vladimir Rashevsky, asked Prime Minister Dmitry Medvedev at an August meeting to consider the option for the development of remote coal deposits in the Far East.

In a sign that the idea will not catch on quickly, Medvedev was cautious with his reply. "I don't know how pressing this is," he said. "I don't rule out the possibility that the issue of tax breaks could be studied."

View From a Bridge

In Vladivostok, workers have constructed two bridges, including the one that connects the city to the APEC forum venue, Russky Island. Built at a cost of 33.9 billion rubles, it's the world's longest cable-stayed bridge.

When it opened for traffic on Aug. 1, local motorists created an impasse by stepping out of their cars to admire the view of the straits and the city from the new point. Lenient police issued verbal warnings but no tickets.

"The bridge, of course, produces a grand impression," Medvedev said after touring Vladivostok in July. "It is indeed an architectural masterpiece and, in fact, is already the symbol of the city."

Russky Island, a former naval base, hosts the newly built university and campus that will accommodate the forum before taking on its function of an educational institution.

With the new, permanent link to the rest of the city, it now will be easier to develop the island further. The city's ferry service was unreliable in gale-force winds and at times when bay ice grew too thick in winter.

Yet two ferries leased from Singapore's Penguin International will service the line between the mainland and the island in addition to the bridge. Each of these catamarans seats 200 passengers.

The other new bridge connects city districts, stretching over Golden Horn Bay and the shipyards and port piers on its shores. It opened later in August to alleviate traffic on the central streets, which have remained almost as narrow as they were at Vladivostok's inception in 1860.

On top of the bridges, Gazprom laid a pipeline to Vladivostok from Sakhalin. It will power the city's electricity plants and replace coal, a dirtier fuel.

Preparations for the forum also included a new airport terminal and a highway to link it to the city.

The federal government has spent 200 billion rubles since the pre-APEC development initiative began in 2008. In all, the initiative's budget reached 680 billion rubles, much of it coming from state-controlled companies such as Gazprom.

The area around Vladivostok is also set to gain some investment separately from the APEC forum.

Gazprom will lengthen the new pipeline that ends in the city. The company is thinking about setting up a plant in the area to liquefy natural gas or convert it into a liquid for shipment by tankers to Asian markets.

It is working on the project jointly with Japanese partners.

Rosneft, the state-controlled oil industry champion, is planning for an oil refinery and a petrochemical plant in the region around Vladivostok. The plant would feed off an oil pipeline that is scheduled to reach the Pacific coast near the city next year.

Elsewhere in the Far East

Preparations in Vladivostok were the country's second-biggest construction effort after the roads, stadiums and hotels for the 2014 Winter Olympics in the Black Sea resort of Sochi. Elsewhere in the Far East, things also moved ahead, but on a smaller scale.

Among the investments are giant projects to produce oil and gas off the coast of Sakhalin as part of production-sharing agreements with ExxonMobil, Shell and Mitsui. State-run Transneft is in the middle of building the oil pipeline that will take Siberian and Far Eastern oil to the Pacific coast and on to Asian consumers.

Workers finished smashing through the rock last year for the new Kuznetsovsky Tunnel, which, when it opens in 2016, will expand the capacity of the Baikal-Amur Railroad.

The highway that connects the Far East to the rest of Russia, between Khabarovsk and Chita, opened in September 2010.

The government last year began building the Vostochny launch pad in the Amur region to take some business away from the Baikonur site that Russia rents from Kazakhstan.

South Korea's state-owned Incheon International Airport, which has often bagged the title of the world's best airport, bought a 10 percent stake in Khabarovsk Airport in July 2011 with the aim of developing it.

Canada's Kinross Gold Corp. began mining gold on the Chukotka Peninsula in 2008, reversing a decline in Russia's overall production of the precious metal.

"There has been progress. Stabilization and development are visible," Maslovsky said. "But unfortunately, the trend hasn't reversed. On the way to the north, the wind is howling through the train stations along the Baikal-Amur Railroad. People are gone, and entire villages are dead."

Travelers between some Far Eastern cities, such as Magadan and Petropavlovsk-Kamchatsky, often have to take a route through Moscow because there's no direct link by air, sea or land.

Rashevsky, of SUEK, said the investment has to come fast.

"The volume of cargoes that has been reached at present is, in fact, peaking," he said at the July meeting. "Further development is extremely difficult. It's high time to move toward drastic decisions."

Extraction of the area's mineral and hydrocarbon wealth is expected to be one of the key drivers for the regional economy.

The government must find ways to persuade the people needed to work at any new companies to stay in the Far East, Maslovsky said. As steps in the right direction, he noted the opening of state-of-the-art medical centers in recent years and federal subsidies that make airfares cheaper for retirees and students who fly to Moscow and back.

These measures, however, haven't stopped a population outflow. A census taken in 2010 showed a decline of 155,000 people over the past eight years, presumably because of migration from the Far East and mortality.

As of 2010, about 6.3 million people lived in the Far East, which accounts for a third of Russia's landmass. The country has a population of 143 million.

A further 40 percent of Far East residents have considered leaving the area, according to a poll conducted in May and June. Most of the 1,000 people polled by the All-Russian Center for Public Opinion Research, or VTsIOM, complained about the high cost of living. The poll's margin of error was 4.5 percentage points.

The sparse population is in stark contrast to the human resources of adjacent China. In a sign of concern, Medvedev said the government must shield the Far East from the "excessive expansion" of people from across the border, an apparent reference to abundant Chinese immigration into the region. Authorities must also prevent the development of enclaves of foreigners, he said, without elaborating, at a Cabinet meeting in August.

In other measures that seek to move the economy forward here, the government's development bank, VEB, set up a fund for the development of the Far East and the Trans-Baikal region in November. Separately from the fund, the bank has already committed to loan 71 billion rubles to 13 projects in the Far East, and loaned half of the money as of November. The fund has the mandate to lend a further 70 billion rubles by 2015.

Its rules, endorsed in July, prescribe that the money doesn't make up more than 20 percent of the total cost of any given project. The fund has prioritized investment in electricity generation, utilities, farming, fisheries, tourism and the timber industry.

Until May, the federal government had toyed with the idea of setting up a state corporation Ñ one like those that oversee the aircraft, high-tech and shipbuilding industries Ñ to lord over all things Far Eastern. It now seems to have fallen by the wayside, giving way to the specialized ministry.

The Far Eastern corporation would have been a co-investor in some of the region's mining, transportation and other projects, a prospect that drew criticism from some economists. Alexei Kudrin, a former finance minister, said a government-backed player would have distorted competition, discouraging private companies from risky investments by creating a chance that it would support a rival project. The measure would have only delayed development, he said in April.

This article can be read in The Moscow Times.