When the Arktika conquered the North Pole 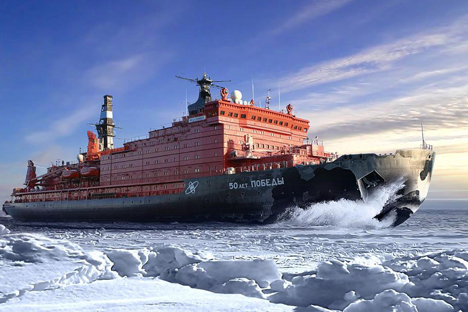 Arktika was built at the Baltic Plant in Leningrad. Source: ITAR-TASS

In the summer of 1977, a Soviet icebreaker became the first ship make an expedition to the ‘Cap of the Planet’.

It has been 35 years since the North Pole was conquered by a Soviet ship. On August 17, 1977, nuclear-powered icebreaker Arktika reached the North Pole and became the first ship in the world to get there by surface sailing. For centuries, many navigators tried to reach the ‘Cap of the Planet,’ but their voyages ended unsuccessfully and even tragically. The experimental voyage of a new generation nuclear-powered vessel built in 1975 became possible thanks to the advanced scientific preparation and long-term studies of the ice cover of the Arctic.

Russia is the only country in the world that builds nuclear-powered icebreakers. These colossal ships have an important geopolitical function – to provide Russia with the ability to pass the Arctic Ocean. No other country has such a capacity. We introduce you to three members of this single fleet.

The voyage of the Arktika lasted for 13 days (August 9-22, 1977). Over this period of time, the ship sailed 3080 miles with the average speed of 12.3 knots. According to the recollections of the participants, the icebreaker broke through the fields of especially thick and solid ice and the sound of splitting large-tonnage of ice floes overboard resembled the crash of a stone breaker.

Having reached the North Pole at 9:40 Moscow time on August 17, they raised the flag of the Soviet Union at the point with latitude 90° N. Near that point, they fastened the flagstaff of Georgy Sedov’s expedition, which had failed to reach the North Pole in 1912.

After the voyage the entire crew (about 200 people) and expedition members were decorated with orders and medals. Arktika Captain Yury Kuchiev, Chief Engineer Oleg Pashnin, Chief Engineer of the nuclear-powered steam generator Fidus Askhadullin and Minister of the Marine Fleet of the USSR Guzhenko were awarded with the title of Hero of Socialist Labour. The icebreaker itself was awarded with the Order of the October Revolution.

Navy Commander: Vikramaditya to be commissioned by the end of the year

This unique nuclear-powered vessel was in continuous service for 33 years (177,000 hours of operation of the reactor facility), spent a year without calling at a port and reached the level of one million miles covered while being in the sea.

The icebreaker was created by joint efforts of the staff of over 350 associations and enterprises, 100 scientific, research, development and operating organisations of the country including the Experimental Design Bureau for Mechanical Engineering named after I.I. Afrikantov, the Mayak Production Association (nuclear fuel reprocessing), the Central Design Bureau Aisberg (design of the icebreaker) and I. V. Kurchatov Institute of Atomic Energy. The crew of the ship participated in its construction. It gave the seamen an opportunity to master the new equipment quickly.

Arktika could break ice five meters thick and develop speed up to 18 knots in clean water. This nuclear-powered vessel features a sloping “icebreaking” prow. The icebreaker’s barrel-shaped hull was made of solid steel alloy and strengthened with a special ice belt along its sides. This type of hull provides increased durability and ability to withstand the ice – to withstand attrition at the waterline and pressure in ice fields. Half-round sides don’t let ice fields to crash the vessel by pushing it up and its sloped prow allows driving the ship up onto the fields breaking the ice under its weight. Besides all this, the icebreaker features an M-shaped stern which allows towing vessels and connecting to other icebreakers.

Arktika also possesses another unique world record; over the period from May 4, 1999 till May 4, 2000 the icebreaker spent the entire year sailing without calling at a port. In 2008, the vessel was taken out of service. Various mechanisms, assemblies and units of Arktika still remain a model of quality and serve as spare parts for the nuclear-powered vessels currently in service.