Enjoy the high life at your own pace 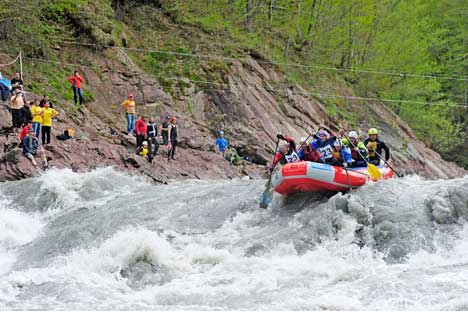 The Caucasus Mountains offer a host of activities, from the gentle-paced to the physically demanding, in stunning scenery.

The Caucasus Mountains were a favourite holiday destination for young people in Soviet times. The “30th route”, a high-mountain path from the Khadzhokh sanatorium to the Black Sea, was one of the busiest of its kind in the world, 20 years ago, with up to 100 people walking the path every day.

Safe haven is often dubbed the “lungs of the Caucasus”, the Caucasian Biosphere Reserve Protected since 1888, the nature sanctuary is on the Unesco World Heritage list, its mountains and forests are home to chamois, lynx, brown bear, deer and boar. The reserve also started a campaign to restore the European bison population which, as a result of the Caucasian wars and active human settlement, had disappeared by 1927. Other moves to bolster the bison population include cross-breeding American bison, or buffalo, with animals from the Belovezhskaya Pushcha National Park in Belarus. “The result turned out to be almost identical to the original species,” says Dmitry Kuznetsov, president of the Sports Tourism Federation of the Republic of Adygea. However, the existence of wild hybrid herds is seen as a threat to pure-blood animals in some quarters.

Numbers fell after the collapse of the Soviet Union but a new generation, inspired by the deeds of their parents, came back to the mountains, along with other outdoor enthusiasts. Today, about 60 people a week use the route, which is open to tourists from June to September.

Those who prefer things a bit drier and more comfortable should set off with a mountain bike or put on their hiking boots. Tour guides offer one-day tours on the Lago-Naki Plateau, but to really see the sites, visitors need more time. The 30-day tour past the massive Fisht and Oshten Mountains to the Black Sea is particularly delightful. For those not up to carrying a heavy backpack, tours are available on horseback. It takes several days to travel the mountains to Dagomys on the Black Sea or Krasnaya Polyana, where the 2014 Olympics will be held.

The mountains are an ideal spot for quiet contemplation and short, relaxed tours are an option too: some hiking tours are just a couple of hours. Horseback treks are designed to be relaxing and give tourists a chance to visit a village of Old Believers, explore the high-mountain plateau or wander in a Circassian mountain village, which has been producing the distinctive Adygei cheese for several centuries.

The mountains’ features include many caves and grottoes, which are studied by visiting speleologists. The caves have been sculpted by the elements, creating a rich and diverse lancape of wells, deep fissures and subterranean rivers. Extreme physical conditions such as high humidity and lack of daylight give the caves a unique atmosphere.

The Caucasus - Ancient traditions and a complex history

But there is also plenty of entertainment for those who like to rise above the stunning scenery. Many tourists come to Adygea for the breathtaking flights on powered paragliders or hang-gliders, which are easily arranged. And for the daring, or perhaps fearless, the republic hosts national and international competitions, including thrilling “fuel-limited” flights.

All September, the republic hosts spectacular alpinism, orienteering and rock-climbing competitions, while the best national rafters in the country meet at the Belaya River in May to compete for the prestigious Russian Water Sport Cup.

Prices of guest houses start from 1,500 roubles a night (£30 for a double room). Alternatively, you can pitch a tent on a campsite.

There are some cafés in Khadzhokh such as the Caveman's Cafe, which also offers ostrich tours.