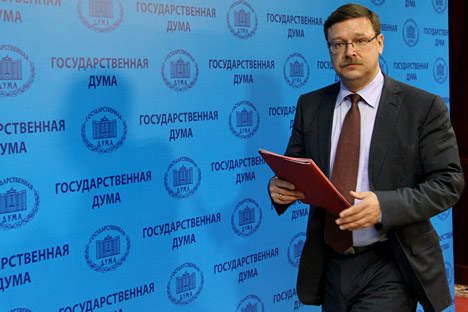 Konstantin Kosachev: "Russia is relatively on a par with its major geopolitical rivals, as far as "hard power" is concerned. As for "soft power", unfortunately, I believe this parity has been significantly impaired." Source: RIA Novosti / Vladimir Fe

Konstantin Kosachev, head of Rossotrudnichestvo, talks to Kommersant about the prospects of using Russian soft power to promote national interests overseas and the role of his agency in this endeavor.

A meeting of the heads of The Federal Agency for International Humanitarian Cooperation (Rossotrudnichestvo) will be held in Moscow in early-September. The meeting’s agenda includes the issue of updating forms and methods of cooperation for Rossotrudnichestvo.

Kommersant: Is the reorganization of the agency on this agenda?

Konstantin Kosachev: Speaking of our goals and methods, we should keep in mind that Rossotrudnichestvo was not established "from scratch". It is based on traditions and skills that were developed long ago, back in the distant Soviet times. In my view, the Soviet Union employed its "soft power" very aptly and in no way worse than its geopolitical rivals— although the Soviet Union never used this term.  The global reputation of the Soviet Union was, at least, no worse than the actual situation in the country, or even better in some respects. Of course, that system was totally ideological and we should not copy-paste that previous experience.

Kommersant: What about today?

K.K: In my opinion, Russia is relatively on a par with its major geopolitical rivals, as far as  "hard power" is concerned: we have the military, resources and economic power. As for "soft power", unfortunately, I believe this parity has been significantly impaired. Sadly, Russia’s reputation and image in the world is much worse than the real situation in the country.

The world has developed a kind of the presumption of Russia’s guilt-the situation when certain events in Russia are immediately interpreted not in our favor due to the inertia of public thinking abroad. In case of a tragedy (say, a journalist is killed), this fact is immediately interpreted as "they kill journalists in Russia, because there is no freedom of expression." In case of a conflict with a high-profile businessman, they say: "yeah, the authorities are taking away his assets trying to redistribute the property."

Here is an example. Last week, Rossotrudnichestvo organized the Constellation festival in Berlin, as part of the Year of Russia in Germany. I was talking with my friend, a colleague I’ve known since the old times in the parliament. He is still a parliamentary deputy, a member of the CDU group in the Bundestag. The CDU is known for its tough attitude towards Russia. So, he told me that just the other day he had read in one of the German newspapers the information about Pussy Riot and their previous conduct. He was talking emotionally and said that, before this, he had an absolutely clear idea that the Pussy Riot girls were convicted unjustly and for purely political reasons. However, when he saw the article he, so to speak, started and asked himself: why didn’t they explain all that before? He also asked me: why haven’t you shared this information, to let the whole world learn it?

Kommersant: So, what did you tell him?

K.K:  I said this information was freely available in the public domain, but they just do not want to take it on the West, because of the notorious public demand for the negative information about Russia and its presumption of guilt. However, I also recognized that we could have worked more consistently and systematically in the information field.

Kommersant: Who in the West establishes the public demand for the negative information about Russia?

K.K:  This is a difficult question. However, you can compare the fervent ardor in the West with regard to Russia and other "non-Western" countries, such as China. After all, if they follow the same principles, critical observers could find a lot of things to criticize in China, couldn’t they?

In my view, there are many aspects in which the debates about Russia are much more emotional; although, objectively, the political, social and humanitarian situation in Russia is definitely at least as good – or even better in many respects – as in many other countries.

K.K:  I believe this is because the focus is more on Russia now. Apparently, China is seen as something immutable and inalterable, so nobody really tries to persuade or dissuade the Chinese leaders. They cooperate with China, not trying to change it. As for Russia, they did have the "successful" experience of pressure upon the country from abroad: first, it was under Gorbachev, and then under Yeltsin. The popularity of these politicians abroad, as well as the popularity of Russia in the West was highest in the late 80’s and early 90’s. However, these were the most difficult years for the nation and its people.

In my opinion, the current Russian leaders absolutely, correctly and adequately understand the interests of this country. A sympathetic understanding of Russia is a major factor, but it can’t be an end in itself. We should not be led by the foreign public opinion just for the sake of sympathy.

Kommersant: Can we learn from other former Soviet republics? Today, Georgia has the best image in the West of all the former republics of the Soviet Union.

K.K:  Learning is a good thing. Indeed, Georgia has achieved a lot. However, political aspects are a major component of Georgia’s positive image. The West has developed the presumption of guilt with respect to Russia and the absolute presumption of innocence with respect to Georgia. Whatever the Georgian leader would do, it would be highly appreciated. Just imagine for a moment a country where the Prime Minister, who is a political rival of the President, dies in mysterious circumstances. I mean Saakashvili and Zhvania. Imagine the discussion in the West, had this happened in Russia. However, they do not discuss Georgia: a man was killed? It’s just an accident. Things happen, you know.

Now, back to Rossotrudnichestvo and the "product" it should yield. In my opinion, this should be a normal, unbiased and non-judgmental attitude towards Russia. We are not talking about creating a flattering image: the image should just be adequate and true. This would a lot better than what has been happening so far.