Trade between India and CIS countries could touch $30 bn 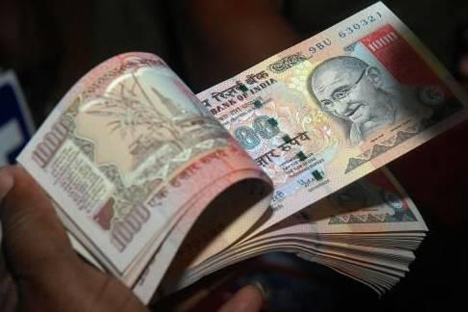 n 2011-12, trade between India and CIS countries was US$ 12 billion. Source: Reuters / Vostock-Photo

Issues related to connectivity and visa regimes need to be looked into to further improve the trade ties.

Trade between India and the countries of the Commonwealth of Independent States (CIS) is likely to touch US$ 30 billion, the Economic Times said citing the Federation of Indian Export Organisations (FIEO).

“Pharmaceuticals, engineering, petroleum, wood and furniture products, IT services will play a key role to strengthen trade between India and CIS,” the ET cited FIEO Director General Ajay Sahai as saying in a statement.  Sahai called on Indian exporters to take advantage of the focus market schemes, according to the paper.

Leading Indian entrepreneur in Moscow talks about business in Russia

The ET also cited Ajay Bisaria, India’s Joint Secretary in the Ministry of External Affairs as saying that there is a need to look at Eurasia as the next front for India's trade growth. Bisaria pointed out issues relating to connectivity and visa regimes that need to be looked into to further improve the trade ties, according to the report.

“Indian exporters should take benefit of the North-South corridor by sending their consignments by Bandar Abbas Port which will cut the cost by more than 40 per cent,” the paper cited Bisaria as saying in a statement.  The Joint Secretary said that the Indian Government has taken many steps to improve connectivity between India and the CIS countries with about 14 flights a week connecting India with the region.

Bisaria was cited by the ET saying that the Indian Government has worked out a plan with Moscow where in the recommendation with the apex chambers would be considered while granting business visas to Indian exporters. “Similarly, with other CIS countries the same proposal is being worked out so that Indian businessmen can undertake projects smoothly in this potential region,” the paper quoted the Joint Secretary as saying.

Irina Orolbaeva, Ambassador Embassy of Kyrgyzstan, was cited as saying that the CIS countries should be taken as a potential market by India as most of the countries like France, Italy and China have already invested in the areas of infrastructure. Orolbaeva also called for establishing banking channels between India and some of the CIS countries, the paper said.

The CIS countries consist of Russia, Ukraine, Armenia and all others former republics of the erstwhile Soviet Union, except the three Baltic countries of Latvia, Lithuania and Estonia.