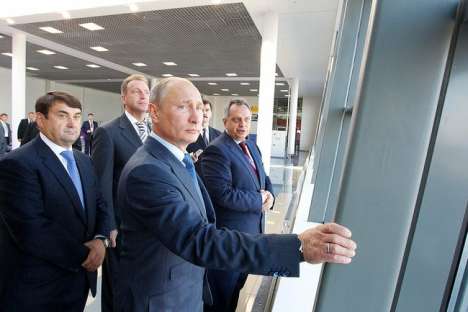 The Kremlin news service released this article written by Vladimir Putin for the Wall Street Journal, where the Russian President talks about Russia's involvement in APEC.

On Saturday, Russia will host the Asia Pacific Economic Cooperation summit for the first time, and that means for almost a week, Vladivostok will be the epicenter of business and politics among the 21 economies in the Pacific Rim. APEC is a platform for leaders to discuss the most pressing global and regional problems.

Since APEC discussions are open in nature, it’s only appropriate that I reveal the priorities we are proposing to our partners as the summit draws near. While the leaders always want to give momentum to fresh ideas, decisions must be made on a consensus basis. Such an atmosphere of trust has become one of the hallmarks of the integration processes in the Asia-Pacific region and was key to past successes.

APEC’s experience is a good example of how integration contributes to economic development, giving a positive signal to businesses. We suggest that the dialogue in Vladivostok focus on freeing up trade and investment flows to stimulate economic growth, taking into account new realities such as Russia’s accession to the World Trade Organization.

Membership in the WTO gives us the ability to participate more broadly in setting the global trade rules – an issue that has been a focus of attention for APEC in the past. I am confident that Russia’s fresh outlook on the objective difficulties and internal contradictions of the WTO will be useful. The very principle of free trade is undergoing a crisis. We regularly observe recurrences of protectionism and veiled trade wars instead of lifting barriers. In these circumstances, it is imperative that we develop common approaches to clearing the accumulated imbalances.

We have made food security a particular priority for discussion at the summit, a proposal that the other participants supported. Instability in global food markets can lead to serious economic and social risks. We must jointly offer answers to this challenge.

One development that gives Russia new room to expand dialogue with its Asian-Pacific region partners is the creation of a common market between Russia, Belarus and Kazakhstan. The Customs Union and Common Economic Space agreements, which already have been implemented, as well as the prospective Eurasian Economic Union are all designed to improve efficiency among its members, and also to play an active part in shaping the regional and international agenda. By building it in accordance with WTO principles, we have prepared the way for new partners to cooperate with Belarus and Kazakhstan on the same terms and conditions.

The initiative could play a significant role in global development and become a bridge between the European Union and the Asian-Pacific region. Closer integration of economic models, regulation and technical standards among the EU, APEC and the Eurasian Economic Union would offer businesses the ability to operate seamlessly across a vast area.

This idea will take time to come to fruition, but we and our partners can bring it closer by discussing a “transport profile” for such an integration project, aiming to build an efficient system for managing logistical risks and diversify trade routes. In this regard, Russia has much to offer. We are already building modern ports in the Russian Far East, modernizing the transportation and shipment infrastructure, and improving national customs and administrative procedures.

According to assessments by experts of the APEC Business Advisory Council, the implementation of these projects will increase traffic flow between Europe and the Asian-Pacific region via Russia’s territory no less than fivefold by 2020. Such shipments are cost-competitive with the traditional routes through the Strait of Malacca and the Suez Canal, and offer advantages in terms of speed and safety.

Today, the key challenge for Russia and all the APEC economies is supporting sustainable growth rates. The quality of growth matters, and that means putting emphasis on innovations and the development of human potential. I believe we must use all the advantages of partnership in these areas, remove barriers to the circulation of ideas, expertise and technologies, coordinate science policy, and jointly shape promising innovation markets.

Special attention must certainly be given to education. Russia proposes organizing a network for university cooperation that would promote student and teacher exchanges and create environment for increased academic mobility. In our view, the time has already come to address the idea of forming a common educational space of the Asian-Pacific region.

Russia has long been an intrinsic part of the Asian-Pacific region. We view this dynamic region as the most important factor for the successful future of the whole country, as well as development of Siberia and the far east. We expect that the upcoming Vladivostok summit will once again demonstrate to the world that Russia is a nation of broad opportunities and ready to join forces with our neighbors to advance our common creative goals.