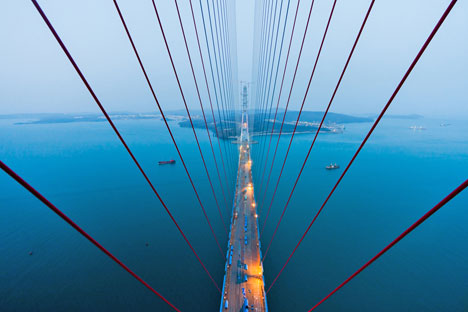 The region should attract investors via its natural resources and rule of the law, institutions, he said. As the latter are lagging behind somewhat, I came to the conclusion – size matters (in the Far East). Source: Vitaly Raskalov

Artem Zagorodnov keeps reporting from Vladivostok about his impressions on the 2012 APEC CEO Summit.

The bad news is that all of this stuff is expensive (as we know from the record-breaking $20 billion preparations for this summit). The good news is that private investors have every incentive to contribute.

Take agriculture: the leading eight APEC countries by population import over 100 million tons of grain per year – more than Russia produces (although Putin promised in his speech that Russia would reach levels of 120 million+ in the near future). Asia was never viewed as a viable export market in the last 100 years because the countries were poor. Now, with the global balance of power shifting, it’s the perfect opportunity for Russia to upgrade its railways and ports and develop agriculture in the Far East to tap this lucrative market. The statistics speak for themselves.

One surprising comment came from First Deputy Prime Minister Igor Shuvalov this morning. With an economics background, I tend to associate state investments with inefficiency, red tape and corruption. Therefore I was always skeptical about this recently founded Ministry of the Far East (despite my highest regard for the Minister himself, whom I interviewed in March). Why not just provide tax breaks for businesses and people (like the dividend and absence of sales tax in Alaska) and let private capital decide where and what to develop in the Far East (as opposed to pouring state money into projects that may or may not bear any fruit)? But Shuvalov stated clearly that he felt taxes were already low enough in Russia (and the Far East). The region should attract investors via its natural resources and rule of the law, institutions, he said. As the latter are lagging behind somewhat, I came to the conclusion – size matters (in the Far East)!