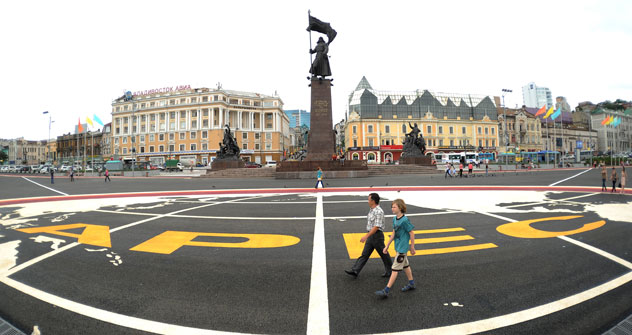 “APEC is being transformed into a platform on which anyone that has got anything to contribute on economic cooperation can be invited to play,” the editor of the East Asia Forum said. Source: Ramil Sitdikov / Ria Novosti

Russia has displayed uncharacteristic diplomatic finesse to steer APEC in a direction that will substantially benefit the region, including its own Far East.

“If Peter the Great lived now, he would undoubtedly build Russia’s capital not in the Baltic region, but by the Pacific Ocean,” Sergei Karaganov, dean at Moscow’s Higher School of Economics, wrote in an essay earlier this year, referring to the Czar who built St Petersburg as Russia's "window on the West" three centuries ago. According to Karaganov, Russia should now have a window on the East.

Among those who share his view is Sergei Shoigu, the governor of the Moscow Region, who has proposed that Russia move its capital to Siberia. While the chances of Moscow losing its numero uno status are subzero, Russia’s engagement with Asia is in step with the inevitable geopolitical and economic shift to its east. Chew on this: China has replaced Germany as Russia’s biggest trading partner. Mutual trade amounts to US$ 90 billion and is likely to cross $200 billion by the end of the decade. Trade with Japan, which was hobbled by as yet unresolved territorial disputes, doubled in the five years to 2010. Trade with South Korea trebled.

But behind these figures is a sobering fact – Russia’s share in total Asia-Pacific trade is around 1 percent. Literally and economically, Russia has been a landlubber – on the edge of the Pacific, but not quite in. Even during the Cold War days when Russia was a great Pacific power, it was solely because of Admiral Gorshkov’s naval might and not because of trade with Asia or other useful engagements.

APEC 2012 changes that. After a long time in living memory, Russia has shown diplomatic dexterity in pushing forward initiatives that are of vital interest to it. From now on, “the rhythm of economic growth in Russia will depend on that of APEC”, Russia’s Finance Minister Anton Silunaov said ahead of the summit.

The summit marks a key milestone in Russia’s relations with Asia. With Europe in decline, Russia is attempting to change its image and appear not only as a European country but as an Asia-Pacific state.

What’s changed is the thinking – the Kremlin now agrees that for Russia to be part of a “rising Asia”, it is necessary for people in the Far East to be able to live freer and richer than in European Russia. Writing in the Ogonyek weekly, Vladislav Inozemtsev, director of the Centre for Post-Industrial Society Research, says, “To try to return Russia to the status of a great Pacific power, we need a wide-scale project of new development of Siberia and the Far East.”

The enormous cash being poured into the region is opening up and transforming it beyond recognition. Vladivostok, once a ramshackle port, is changing into a showpiece city. The westward migration that was threatening to depopulate the region has stopped and shows signs of reversing. Russia is walking the talk.

APEC 2012 couldn’t have come at a more opportune time for Russia. The Middle East, the world’s leading petrol station, is currently passing through turmoil. It is likely things will get a lot worse before they get better. It is in this backdrop that news arrived last week that Russia’s oil production topped its Soviet era production record.

With 60 billion barrels in proven oil reserves and 47.6 trillion cubic meters in gas reserves, according to the US Energy Information Agency, Russia is a natural place for other countries to turn to for energy. While Europe has relied on Russian gas for well over three decades, less well known are the giant oil and gas pipelines snaking across Russia’s eastern territories, ready to fuel the seemingly insatiable economies of Asia.

Also because of its East-West location, Russia is poised to offer another unique proposal – it has called on APEC members to use its Northern Sea Route and the Trans-Siberian Railway to diversify their supply chain routes. PricewaterhouseCoopers estimates a $20 billion investment in the infrastructure of the East-West transport corridors in Russia would help the Asia-Pacific economies save about $600 billion by 2020 through faster and lower cost delivery to European markets. Currently, only 1.5 per cent of cargo travelling between Asia and Europe passes via Russia.

The case for India

Peter Drysdale, the editor of the East Asia Forum, says that without anyone noticing, Russia has opened an entirely new play. “APEC is being transformed into a platform on which anyone that has got anything to contribute on economic cooperation can be invited to play,” he says. “There’s no reason why Indonesia next year, for example, might not invite India to the APEC party to do important regional business.”

India is keen to join the group but according to a Filipino trade negotiator, Western countries are behind the move to keep India out because they are concerned its entry would tip the balance of power towards Asia.

However, because of the very nature of APEC, current host Russia, Indonesia in 2013 and China in 2014 can prepare the stage for India’s entry. This is because decisions are made by consensus rather than through a process of formal negotiations. Consensus on India’s membership would probably be easier than negotiations.

The only hitch is India’s earnestness. While New Delhi’s APEC ambitions tie in neatly with its – unusually farsighted – Look East Policy, New Delhi has not really delivered in terms of regional leadership. Tiny countries like New Zealand and Singapore outdo New Delhi in the leadership department. India has to first work on this aspect before it can expect the red carpet welcome.

APEC: How it works

The advantage APEC has over rivals like the Trans-Pacific Partnership – which the US is pushing – is that APEC’s lack of formal, binding agreements has been able to lower trade barriers and facilitate trade. According to a study paper by the US Congressional Research Service, “Since APEC’s inception the average tariff rate among its members has declined from 16 percent to 5 percent, in part due to the commitments made in the IAPs. An APEC trade facilitation initiative from 2002 to 2006 lowered the cost of business transactions for APEC members by an average of 5 percent. According to some business leaders, APEC’s trade facilitation efforts have had a greater effect on international trade in the region than formal trade agreements that selectively lower tariff rates.”

The study adds that APEC also acts as an incubator of ideas to address “next generation” barriers to trade and investment in a range of areas such as supply chain connectivity.

While free trade arouses fear and anger in many parts of the world, the Kremlin is making a bold play for borderless trade. If Russia can pull it off, it can change the map of the Asia-Pacific – and the landscape of its Far East.