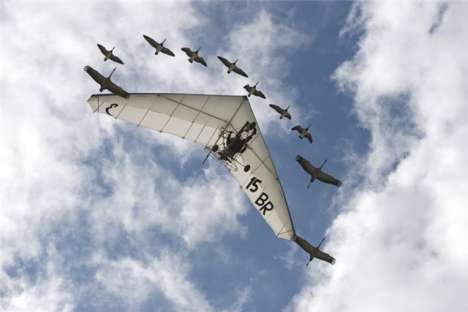 The program, Flight of Hope, was originally developed in the United States, and Putin is to become the first man in Russia to train local cranes. Source: AltaPress

Disguised as a crane, President Vladimir Putin is going to guide a wedge of highly endangered birds to their winter habitation.

To be recognized by the young birds as the leader of their wedge, Putin will have to wear a beak, a white robe and a helmet, Yury Markin, head of the nature reserve where Siberian cranes are bred, told Russkaya Sluzhba Novostei.

Six snow-white cranes raised in the Oka Nature Reserve in the Ryazan region have been waiting for Putin and proper weather conditions to embark on their journey to the wintering area, Vedomosti reported.

Putin, who has been trained to steer a glider, according to Peskov, will take part in a special training session near the village of Kushevat, in the Yamal-Nenetsk region, so the birds will learn their way to Iran or India.

The birds, however, are not being trained how to act in front of the head of state, but ornithologists will rely on their natural instincts.

“There a special phenomenon when [chicks] remember their parents from an early age,” Markin said. “During this training, a parent for cranes is someone in a white gown.”

“It’s not a specific person that they remember, but a white hooded robe, and a white helmet on a glider, a special head-shaped beak,” he added.

The crane training is part of a bigger program to save highly endangered birds living in western Siberia, which are all but extinct in the wild.

The program, Flight of Hope, was originally developed in the United States, and Putin is to become the first man in Russia to train local cranes.

The trip to the remote area was reported earlier this week, when Russian-American journalist Masha Gessen said she was fired from the Vokrug Sveta magazine after she refused to send a reporter to cover the presidential visit to Kushevat.

The cranes, however, should use their chance and learn quickly, as after the training, Putin has to rush to Vladivostok to make a speech at the Asia-Pacific Economic Cooperation summit on Friday.