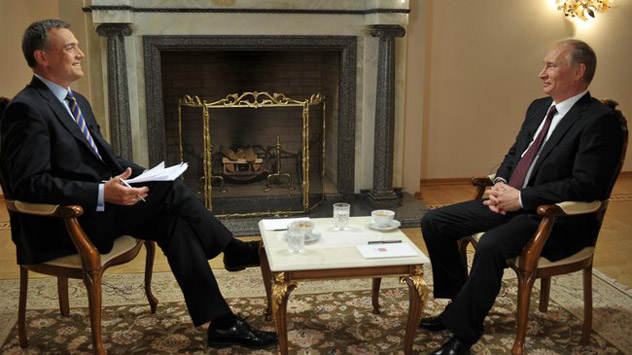 Putin commented on many topics, including domestic and foreign policy issues. Source: kremlin.ru

In his first TV interview since his inauguration on March 7, 2012, Russian President Vladimir Putin spoke about his expectations for the APEC summit currently being hosted by Russia in Vladivostok. Putin also commented on more topical, domestic and foreign policy issues, including the Syrian conflict, the upcoming U.S. presidential election and Russia’s Pussy Riot scandal.

Economics is proves greater than politics

When asked whether he feared that politics would prevail over economics at the APEC summit, with many key participants not seeing eye-to-eye on such pivotal international issues as the Syrian conflict, President Putin gave this assurance: “APEC was, from the outset, conceived as a forum for discussing economic problems. As the host country, we intend to focus on this the economic and socio-economic problems.”

The president also touched upon the eurozone crisis, reaffirming that Russia was interested in the eurozone remaining. “These are the main markets for our goods. If they shrink, then our production will immediately shrink,” said Putin. Russia is now better prepared for a new wave of the eurozone crisis because, as Putin said, “we have passed through the previous wave and we understand what should be done and how; we have the instruments for combating the crisis.”

A “tightening of the screws”

An anti-government protest on Bolotnaya Square in Moscow in May turned into a mass disturbance, with dozens of people injured and more than 400 demonstrators arrested. The Russian government has since tightened requirements for organizing and carrying out large-scale events— a move which angered domestic opposition and met with criticism in the West.

Answering questions about Russian domestic policy, the president confirmed that the Russian authorities are committed to the further democratization of the country. Concerning claims that his return to the Kremlin marked a “tightening of the screws” with regard to the opposition, Putin said: “If you mean the condition that everyone, including members of the opposition, must abide by the law, then this condition will consistently be implemented.”

The punk band Pussy Riot entered the Christ the Saviour Cathedral wearing hoods, turned on sound amplifiers, and staged what they called a “punk prayer”. The three young women were eventually sentenced to two years in prison for hooliganism.

He also commented on the situation involving the scandalous actions of the punk group Pussy Riot at the Cathedral of Christ the Saviour, which aroused great public interest, both in Russia and abroad. Putin said that he was aware of what was happening in the case and “staying well out of it.” Putin described the so-called “punk prayer” in Russia’s main church as a “witches’ Sabbath.”

The president recalled the beginning of the Soviet period, which brought much suffering to believers through the victimization of a huge number of priests, Orthodox Christians, Muslims and representatives of other religions. Countless churches were destroyed and all religions suffered great injury. “In general, it is the duty of the state to protect the feelings of believers,” said Putin.

Change need not be violent

The Syrian conflict has been raging since March 2011, claiming near 17,000 lives, according to the UN. Western powers and a number of Arab countries want President Bashar al-Assad to step down, believing that will stop the violence. Russia and China, on the contrary, fear that external interference in Syria may lead to a collapse of statehood and an increase in the scale of conflict.

The Russian president confirmed that Moscow did not intend to change its stance on Syria. “Perhaps our negotiating partners should also reassess their position? When I think of what has been happening in recent years – and I would like you to think back to the events of recent years – not all the initiatives of our partners ended up as they would have liked them to,” Putin said.

He added that Russia is well aware that Syria needs change; but that does not mean the spilling of blood should be involved. “I think the first thing to do is to stop supplying arms to the conflict zone, and yet this continues,” said Putin.

In December 2010, mass unrest in Tunisia led to the Jasmine Revolution. The protests were fueled by popular discontent with the lack of political freedom and social inequality in the country.
Following events in Tunisia, protests broke out in other Arab countries, including Egypt, Libya, Morocco, Jordan, Bahrain and Oman. The events, dubbed the “Arab Spring”, led to regime changes in Egypt, Libya and Yemen.

Giving a general assessment of developments in the Middle East, Putin suggested that the events of the Arab Spring were caused by the fact that Arab leaders missed the time for introducing critical reforms. “The leaders of these countries… failed to sense the trends in their own countries and in the world, and they did not implement necessary reforms in a timely manner,” Putin said.

The president also touched upon plans to develop a global missile defense system, which includes the EuroBMD in Europe. The issue is a stumbling block in relations between Russia and the United States.

“Could this problem be solved if the incumbent U.S. President, Barack Obama, is elected for a second term? In principle, yes. But this is not only about President Obama. There is also the military lobby, there is the State Department with its fairly conservative machine,” Putin said. He suggested that the United States and Russia must inwardly accept the fact that they are reliable partners and allies, if they are to solve the ballistic missile defense problem

In this regard, Putin described as “erroneous” the anti-Russian, election rhetoric of Republican presidential candidate Mitt Romney, who considers Russia to be America’s number one geopolitical foe. Nevertheless, Putin stated that Moscow would work with Romney, if he were elected. “We will work with whomever the American people elect,” said Putin.