Business
Oleg Dymov
based on Izvestia 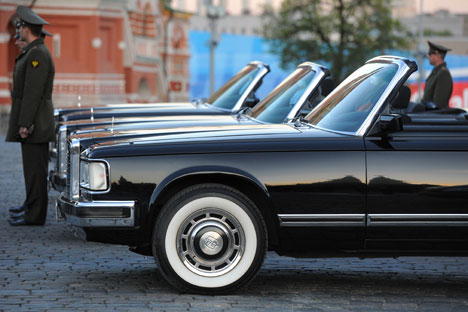 Russian car manufacturers want the country’s leaders to trade their Mercedes in for domestically produced limousines.

While President Putin has been traveling in a Mercedes-Benz S-Guard Pullman, the Moscow car manufacturer ZIL has completed production of a prototype limousine for the country’s top officials. Its engineers hope the car will replace foreign-made sedans in government motorcades.

On Sept. 3, press reports about the Ministry of Industry and Trade and other government agencies actively discussing a proposed Russian-made luxury limousine for top officials surfaced. Experts are skeptical about the project’s future, citing its development costs at $1.28 billion. Izvestia reported, however, that the ZIL automotive factory in Moscow has already manufactured a prototype of the luxury car with the Depo-ZIL company. According to the developers, the prototype cost much less than the aforementioned figure quoted by experts.

Although Dmitry Medvedev ordered the development of a suitable vehicle two years ago, Depo-ZIL Executive Director Sergei Sokolov said the factory’s designers had begun working on the project back in 2004. The design of the new limousine’s body is complete, along with a 1:5 scale model of the government vehicle. Work on the project, code-named Monolith, continued intermittently until it was finally completed in 2012. Testing is scheduled to begin in the near future at the Dmitrovsky testing grounds, to be followed by certification by the relevant agencies.

The development of domestic cars for top Soviet leaders started in the 1930s; before that officials rode in foreign-made cars. The seven-seat ZIS-101 limousine pioneered the class of Soviet-made executive cars. It was manufactured by the ZIL plant, which was then named the Stalin Plant. By the 1950s, domestic cars had completely replaced foreign vehicles in government garages. An automotive hierarchy of sorts had also emerged by then. Top officials rode in the ZIS cars, mid-level bureaucrats were issued the GAZ-M-12 ZiMs, and lower-ranked statesmen had to make do with the GAZ-M-20 Pobeda. However, all of these cars were upper-middle-class cars, rather than luxury cars. The first true luxury car produce by the Soviets was the GAZ-13 Chaika, which went into production in 1959. By the 1970s, the country’s top leaders had switched back to ZIL models. The era of Soviet-made limousines came to an end with the collapse of the Soviet Union, when more competitive Western makes -primarily the Mercedes- made their way onto the Russian market.

ZIL used to manufacture executive limousines in the Soviet era, and even now Russians of an older generation associate these cars with top officials. According to Sergey Sokolov, Executive Director of Depo-ZIL, designers working on the Monolith project wanted to reflect a continuity of style that alludes to the era of classic ZILs ridden by Leonid Brezhnev, Mikhail Gorbachev and Boris Yeltsin. Sokolov acknowledged, however, that few parts from that age survive in the new limousine.

The Soviet limousines offered an extremely peculiar riding experience. They were designed for long trips only and were not meant to stop at traffic lights – roads were simply cleared for Soviet leaders to pass through. These cars were also rather difficult to handle, requiring drivers with special training. The new ZILs will not inherit any of those ‘special’ features.

Above all, the most important revision that engineers made was to replace the carburetor engine with a fuel injected model. Engine capacity remains unchanged at 2 gallons, but its power has been increased from 315 to 400 horsepower. The three-speed, manual transmission has given way to a five-speed automatic, while the suspension has not been altered at all.

The new model rides on 18-inch rims, since only the Moscow Tire Plant manufactured the special 16-inch Granit tires for the ZIL limousines. Finding the right 16-inch rubber for a car that weighs in at more than 7,700 pounds but accelerates to 124 mph, like a regular passenger car, proved impossible. “18-inch tires are made in America for large cars. That’s why we had to fit bigger wheels,” said Sokolov.

It was a mistake to discontinue production of the ZIL limousines. This is precisely the kind of car that the state’s top officials need. And I support the idea that its production should be revived at a new level. If a country has an automobile industry, then its leaders should ride in domestically made cars. The head of state’s car must be safe, reliable, efficient, and offer the capability of performing in any environment.

Igor Korovkin, Executive Director of the Association of Russian Automakers

The six-door car features an interior that is similar to the Pullman class, with facing seats. The rear bumpers boast a climate control system that is able to create separate climate zones for the right and left sides of the passenger compartment. The new limousine also has a brand new power system, with an upgraded 150 A generator. “That’s enough to power a bus,” Sokolov remarked.

The concept car is yet to be armored. According to the factory, an armored version may appear once the existing model has been certified and negotiations with the authorities completed. Depo-ZIL was evasive when speaking about the project’s investors. “A group of rather rich people with an interest in the matter sponsored the project,” Sokolov said. Izvestia was unable to contact Viktor Khrekov, spokesman for the Office for Presidential Affairs.

Meanwhile, Depo-ZIL has not ruled out the possibility of starting serial production of luxury vehicles for second-tier officials as well.

Based on the Izvestia article which appeared originally in Russian.