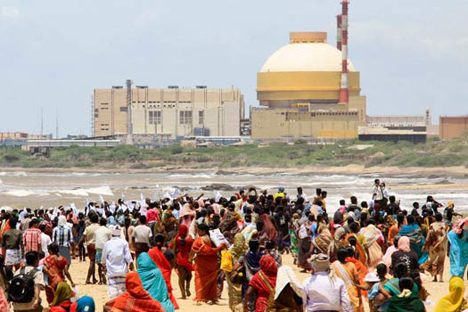 The most important project of bilateral Russian-Indian relations in the energy sector is now entering the home stretch. Source: Press Photo

The power grid of the southern Indian state of Tamil Nadu is set to receive the first long-awaited supplies of electricity from the Kudankulam Nuclear Power Plant (KNPP) by the autumn and the first power-generating unit is due to reach capacity by December.

The optimistic statement made by M.R. Srinivasan, a member of the Atomic Energy Commission of India, ahead of loading the first nuclear fuel into the reactor of unit №1, was received positively by the country’s partners in Moscow after a series of difficult and occasionally wayward decisions that had to be taken by the Indian authorities during the final phase of commissioning the plant.

Alexander Lokshin, first deputy general director of Rosatom, who oversees energy matters at the Russian state-owned corporation, was in no hurry to make any forecasts, but confirmed (after R.S. Sundar, head of KNPP, had done likewise) that loading of nuclear fuel at the first reactor was due to begin “any day now” — as soon as the mandatory checks of all systems and support staff have been carried out by the Atomic Energy Regulatory Board (AERB).

Thus, the most important project of bilateral Russian-Indian relations in the energy sector is now entering the home stretch. On loading the first batch of uranium-enriched fuel, the plant will commence the physical start-up stage, during which it ceases to be a mere a building site and becomes a full-fledged nuclear facility, with all the attendant consequences in the form of guarantees and commitments under the IAEA.

For the record, construction of the facility was carried out with the assistance of Russia’s Atomstroyexport, based on an agreement between the former USSR and the Republic of India (November 1988) on cooperation in the peaceful use of nuclear energy. Construction began after the signing, in November 2001, of the General Agreement on Construction of Kudankulam NPP and a memorandum on the basic principles of cooperation.

Russia’s obligations under the project included: the drafting of working, start-up and maintenance documentation; supervision of the construction of buildings and structures at the site; supply of equipment and materials from Russia and third-party countries; technical support for the installation and commissioning of the plant, and the training of Indian operational and maintenance personnel in Russia.

As the customer, the Indian Atomic Energy Corporation agreed to carry out general, installation and start-up work, and to commission the plant.

While tempers flared over the Kudankulam NPP, and start-up operations at the site were put on hold, similar procedures were successfully carried through at Iran’s first nuclear power plant in the Bushehr province, once again under the guiding hand of Russia’s Atomstroyexport. May 2011 saw the physical launch of the reactor at minimum capacity. Last fall and in the first half of this year, Russian and Iranian specialists worked jointly to bring the power-generating unit to project capacity, which was achieved in the last days of August. Valery Limarenko, head of Atomstroyexport, announced that the “attainment of 100 percent capacity marks the final phase of commissioning the unit, during which all equipment and systems will be tested at the projected level of electrical power.” It is expected that the first unit of Bushehr NNP will be handed over under a service agreement to the Iranian operator in December 2012.

In April 2010, the reactor of unit №1 was loaded with heat-generating imitation fuel. In December 2010, successful hydraulic tests were performed on the primary and secondary loops of unit №1, after which it began its “hot run-in.” According to the schedule, which takes into account the realities on the ground, the first unit was due to come on stream in late-2011. However, due to protests by the local population in the wake of last year’s disaster at Japan’s Fukushima plant, the completion phase was put back, which was followed by more than six months of explaining and decision-making.

Only in March 2012 did the government of Tamil Nadu take the decision to resume work at Kudankulam, stating that “nuclear power is needed to meet the country’s growing energy needs.”

In mid-July, a delegation of the Indian Department of Atomic Energy and the Indian Atomic Energy Corporation paid a visit to Moscow. The talks centred on the imminent start-up of unit №1 and the progress of unit №2, as well as the start of construction of the third and fourth units.

Among the documents signed was a protocol to the Russian-Indian intergovernmental agreement on the terms and conditions of granting Russian state credit for the construction of unit №3 and unit №4 of Kudankulam NPP. As noted at the time by the officials representing Moscow and New Delhi, the signing of the protocol was “an important step” in the second phase of Tamil Nadu’s nuclear power project.