The Voice of Russia
Petr Zhuravlev 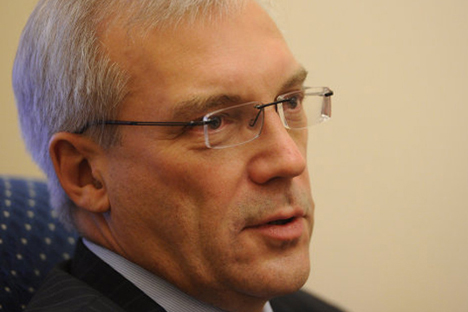 In an exclusive interview to the Voice of Russia, Russia's Deputy Foreign Minister Alexander Grushko gives his opinion on the integrity of security, mistakes of the West, Afghanistan and anti-missile defence.

The Voice of Russia: I would like to start with an important aspect of the country's foreign affairs - its relationship with NATO. This aspect interests me because many people do not understand whether or not NATO is Russia’s enemy. We don't quite fight against them, but we are not friends either.

Alexander Grushko: I believe that if we talk about the whole range of issues covered by the Russia – NATO relations, one cannot apply any “enemy-friend” definition here. Both Russia and NATO realise that two such major agents in the sphere of global security – the largest state in Eurasia and the leading military political organisation (one must admit it is so) – must preserve a normal relationship and cooperate in the sphere of common interests in today's world when not only the relationships between countries become global, but also the challenges they face. This is one thing. And the other thing is that the era of confrontation is over. There are no more armies that face each other armed with thousands of warheads and loads of military equipment. Let me remind those who maybe already forgot that many of the NATO's communiqués back in the 1980s started with the evaluation of the probability of a military conflict with the Warsaw Pact countries. Of course, there were no such plans, but nevertheless, it showed that we looked at each other mostly through the gun-sights. After the NATO-Russia Founding Act was signed the relationship began to evolve and has developed tremendously over time. But at the same time, one must not idealise anything, because NATO is a large military organisation that has not gotten rid of all the elements tied to its initial purpose, which we all remember. We must be vigilant in these issues and watch NATO’s evolution closely. That is why I would say that there are two aspects today that are of special importance – on the one hand we need to find common ground with NATO and cooperate on the issues where such cooperation would add value. But along with that we need to clean off the layers of the “Cold War” of the past, build up predictability, our military cooperation, eliminate the concerns about the military activity of the NATO countries and move towards the modernized partnership as it was agreed upon during the Lisbon summit that took place in November 2010. And this is the approach that we have been consistently applying. It shows in all spheres of our cooperation, as they were defined in the Lisbon document.

Alexander Victorovich, do we have any political contacts with the NATO that are not military?

I specifically wanted to ask about the content of that dialogue and about the agenda.

The agenda of such political contacts is naturally focused on the issues of security. If we talk about the current stage of the NATO-Russia relations, we dedicate most of our attention to common threats and challenges. These common threats and challenges were set in the Lisbon Summit’s document, which was called “The Joint Review of 21st Century Common Security Challenges”. The document states that the situation in Afghanistan, problems related to the proliferation of weapons of mass destruction, piracy and the need to protect infrastructure are all of special interest to NATO and Russia. Missile defence is one of the most promising areas of cooperation. At the same time, in the framework of the political dialogue any problems can be discussed if raised by another country. We have also raised questions about the proliferation of NATO, about the fulfilment of certain NATO programs and the increasing proximity of NATO infrastructure to Russian borders. All this is subject to a close analysis and a dialogue with our partners.

Alexander Victorovich, you have mentioned twice that Russia is worried by certain NATO activity. What exactly do you mean?

The Russian navy as an instrument of grand strategy

We primarily view NATO activity given the commitments that NATO took upon itself in the NATO-Russia Founding Act. The meaning of those commitments was that NATO had committed to not positioning its military infrastructure closer to Russian borders and refused to deploy substantial military forces long term on the territory of its new member states. Unfortunately, we see that there are military forces being deployed in the Baltic region. In particular, on the territory of Lithuania, Latvia and Estonia new military objects have appeared and NATO aircraft are patrolling the territory. And we cannot ignore that fact in our military planning. Our position was that instead of spreading some NATO standards on those territories, which prescribe offering those states adequate protection, we could instead sit down together and agree on how we can use some common instruments in order to guarantee the necessary level of security and stability in that region. Unfortunately, the dialogue on that subject has not yielded any results yet. In particular, we continue to wait for some reaction from NATO to our proposal that those commitments that I just talked about were put in precise military and political terms. We made our proposals and hope that in the end they will be accepted.

Our leaders have stated many times the “principle of indivisibility of security”, which has become a commonly used phrase now. Is NATO in agreement with us in at least declaring this principle?

The principle of the indivisibility of security is written in all the documents, in particular, in NATO documents and the documents of the NATO – Russia Council. It means that the security of each state is the security of all, and no state can build up its security at the expense of others. Unfortunately, in real life we see that these principles are not always observed. I already mentioned the example related to the commitment to hold back the deployment of military forces, but I can extrapolate that situation to other spheres. The point of the Russian proposals regarding the European security treaty is to create the same level of security for all the states of the Euro-Atlantic region, regardless of whether they are members of a military-political pact or not. And we hope that in the end we will be able to fulfill that plan. And then the Euro-Atlantic region will truly turn into a region of stability and peace and the military instruments, including those organizations that were set up back in the era of confrontation, will play a lesser role in determining the key criteria of such a new security order.

Please tell us, where does the OSCE belong in the current landscape of the European security?

The OSCE was set up as the organization for security and cooperation in Europe. Unfortunately, in the last few years we observe that the member states have less need for the OSCE instruments. In the 1980s and even early 1990s OSCE was at the heart of European and Euro-Atlantic politics. It was under the OSCE that the fundamental instruments appeared that strengthened the military security, such as the Treaty on Open Skies, the Treaty on Conventional Armed Forces in Europe, as well as a number of documents that were a breakthrough in taking down the consequences of the Cold War and the confrontation. (I believe we are talking about six to eight documents). Today we see that the military functions of the OSCE have died out. The dialogue goes on, but it continues on formally, and our partners do not show any significant initiative. Unfortunately, we see a complete stagnation in the area of conventional weapons as well. That is why the OSCE is gradually turning into some sort of a human rights and democracy organization, which naturally weakens it. First of all, because more efficient organizations already exist in this sphere, in particular, the European Council, which unlike the OSCE has an ability to create legal mechanisms. And secondly, we never agreed that the organization for security and cooperation in Europe would deal with neither security nor cooperation. That is why the OSCE is going through such difficult times. Nevertheless, we continue to invest in that organization in hopes that its weight on the Euro-Atlantic and Eurasian landscape could be increased. In particular, one of the most promising directions of that organization’s development is the utilization of the joint security platform – I mean the document that was signed at the 1999 summit in Istanbul, which allowed the organization to become a platform for a dialogue between other organizations that act in the Euro-Atlantic domain. The OSCE’s strength is that it unites 56 states of the Eurasian region. Those states are members of numerous other organizations. On the OSCE platform one can think about how cooperation can be built in a wider context, how to bring to the table NATO, the CSTO, the European Union, and perhaps the Shanghai Cooperation Organization and the European Council in order to move ahead in strengthening the security mechanisms without replicating each other. But most importantly, we need to do it in harmony and in accordance with our common goal.

Please tell us, the so-called cooperation on Afghanistan; is it the cooperation between Russia and the NATO or Russia's cooperation with separate NATO countries?

That cooperation is with separate NATO countries, as well as with NATO itself. I would not differentiate between them, because in the end we all perform the same task. But the important thing is not that we cooperate, but that we do it with the same political plan in mind. Such cooperation is in full accord with the UN Security Council resolution, which requires all states to cooperate with the International Security Assistance Force (ISAF) in Afghanistan. And that is what Russia does. As far as the specific projects of cooperation on Afghanistan, they are very direct and effective. First thing that Russia does it offers transit opportunities. As you know, we have signed agreements with a number of NATO states regarding the transit of military equipment and weapons. We also have an agreement with NATO about the transit of the so called non-lethal commercial cargo which is massively being shipped for the ISAF needs in Afghanistan, and has also been lately shipped out of there in connection with the upcoming withdrawal of the ISAF. Very recently, on June 25 this year the Russian Government passed a new regulation, which introduced a new term of combined transit. And now this transit of non-lethal cargo can be fulfilled by several types of transportation – by ground or air transport. As you know, Ulyanovsk was set as the transit point.