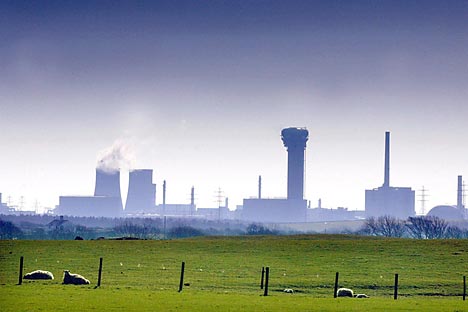 In the period ahead, it is going to be problematic for any coalition government in Delhi to steer through the setting up of nuclear power plants.

The year-long popular agitation against the Kudankulam Nuclear Power Project (KNPP) in the southern state of Tamil Nadu has become a test case of the functioning of the Indian political system. Blood has been drawn, when the police shot down last Saturday an innocent person who wasn't even a protestor. But no major political party raised its voice to protest. The “collateral damage” of the agitation is cascading.

What comes to mind is once again the failure of political leadership. The established political parties failed to provide leadership. The lingering image is of defiant fishermen silhouetted against the joyful waves of the ocean, splashing water at the uniformed policemen on the seashore, whose tear gas canisters and batons have been “neutralized” by the Indian Ocean.

This was an agitation that was expected to fizzle out because of lack of sponsorship or patronage by any major political party. But it is today in the national (and international) limelight. The political parties at the national level and the two main regional parties in Tamil Nadu are still hoping that the agitation will die down. The ruling Congress Party and the opposition Bharatiya Janata Party at the centre are advocates of India tapping nuclear energy to meet India's acute power shortage.

No major political party at the national level, or any of the powerful regional parties, has any quarrel with tapping nuclear energy to meet India's energy security. Even the tremors of Fukushima, felt worldwide, failed to shake up their touching faith in nuclear power, no matter what Germany or Italy might do with regard to nuclear power plants.

This gives the popular agitation in KNPP an “extra-parliamentary” dimension. The agitation is principally led by the civil society. For the most part of the past year it was a local agitation confined to the remote region of southern India where the KNPP is located. The local fishing communities provided the “cadres” for the agitation while the Christian Church became the rallying point.

The authorities consistently attempted to discredit the agitation. They sought to impute that the agitation is funded and supported by western NGOs in a concerted campaign to block India's development. There have also been suggestions of a foreign-policy angle. The right-wing Hindu nationalist instinctively suspected yet another conspiracy by the Christian Church (which has a robust tradition in South India to identify with burning societal issues) to proselytize among the poor fishing communities.

These allegations cannot be dismissed easily. One would like to imagine that Delhi must really be in possession of evidence to back up the allegations by senior officials - including Prime Minister Manmohan Singh -regarding the “foreign hand.” Equally, Russia's Rosatom is doing well in the Indian market and it might cause envy among the company's competitors in the West. The KNPP agitation coincided with the India-Russian negotiations over the setting up two more Russian nuclear reactors as the next stage of the project.

While all this is perhaps understandable, they still do not quite add up. Two days ago, India's veteran communist leader V. S. Achuthanandan ("VS") wrote an extraordinary Op-Ed in Kerala's influential daily ‘Mathrubhumi’ in support of the KNPP agitation purely on the merits of the issues involved. VS cannot be branded as an apologist for Westinghouse - or the Vatican. And he wrote not as a Marxist but as an informed Keralite who happens to live less than 80 miles away from the KNPP and is worried like hell as to what is going on. His reasoning can be summarised as follows.

Added to the high cost of electricity production, serious issues of nuclear waste, environmental impact and safety standards arise. A single 1000 MWreactor - KNPP has two such reactors - creates at least 30 tonnes of nuclear waste annually. How and where is this massive quantum of highly reactive waste to be dumped for safe storage for decades to come?

Then, the KNPP needs 102 lakh litres of sea water per day for its two 1000 MW reactors. This enormous quantity of water will be sucked from the sea at incredibly high pressure drawing in the entire foliage of the sea. In turn, the nuclear plant discharges this water back into the sea at 140 degrees centigrade. The temperature of the sea near the KNPP is expected to rise by13 degrees centigrade. Apart from the colossal destruction of the environment, the livelihood of fishing communities will be affected.

Again, KNPP is located in a region highly prone to earthquakes. Hardly 130 kilometres away, the Gulf of Mannar is the abode of a semi-active volcano. Instances came to light in 1998 and 2001 of molten rock flowing in lava form underground within a 25-kilometre radius of the KNPP site. The KNPP is situated adjacent to some of the worst hit coastal regions during the tsunami in 2004. At least 3 instances came to light of rain water funnelling down as if into deep wells within the 25 kilometre radius of the KNPP, indicative of highly unstable earth formations.

VS concluded that the KNPP should be shut down. He advocated that the enormous government subsidies for generating nuclear power could be better utilised to focus on tapping solar energy. But VS's opinion is highly unlikely to impress the central government Delhi, which is resorting to coercive methods to smash up the KNPP agitation and scatter its leadership. In any case, there is hardly any instance of the ‘civil society’ defeating the Indian establishment since the rare success of the enterprise led by Gandhi some six or seven decades ago.

Besides, the government is convinced that it is comfortably placed, since no serious political party is interested in the KNPP agitation. The heart of the matter is that Tamil Nadu faces acute power shortage and the 2000 MW electricity produced by the two reactors by mid-2013 will come as huge relief. Thus, the mainstream opinion in Tamil Nadu is heavily loaded in favour of the KNPP - and that, at the end of the day, is all that matters to the national political parties, who eye the Tamil Nadu parties as crucial alliance partners in the 2014 parliamentary elections that promise to be a defining moment in India's coalition politics.

At any rate, the average Indian politician views agitations with distaste as pointless extravaganza or a nuisance unless they can help unlock the door leading to the corridors of power. The KNPP agitation is yet to show its potential to catapult him to power. Thus, VS is, in a manner of speaking, a maverick - like the Catholic priests of Kudankulam.

Nonetheless, a point of no return may be reaching soon. First, Keralites hold VS in great respect and his views and perspectives mould the mass opinion of Keralites. This is one thing.

Besides, in the next day or two, the apex court in Delhi is expected to give an opinion on the desirability of the government going ahead with the imminent ‘loading’ of the first reactor at the KNPP. A court ruling in favour of the government will mean that the reactor will be ‘loaded’ and a fait accompli is reached.

On the other hand, the KNPP agitation has assumed national character and that will cast shadows henceforth on India's nuclear energy program as a whole. In the period ahead, it is going to be problematic for any coalition government in Delhi to steer through the setting up of nuclear power plants.

There is no question of the government shutting down the KNPP. 2000 MW of electricity make a lot of difference to India's economy today. The government has also made heavy investments in putting up the KNPP and cannot discard it as junk. Yet, how could the KNPP function smoothly when the hostility of local people in the surrounding villages and towns has become so entrenched? That hostility may not wither away even if the KNPP reactors get ‘loaded’ and the plant's electricity lights up the rest of Tamil Nadu.