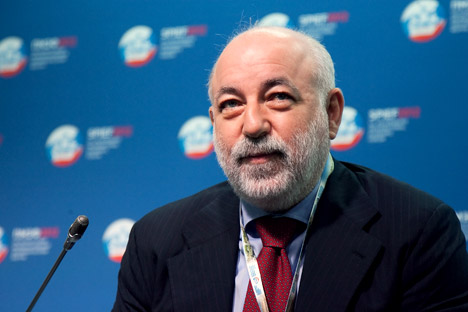 Viktor Vekselberg: "It was very interesting for me to see how a completely undeveloped territory like Russky Island was developed into an urban center in such a short period of time." Source: ITAR-TASS

Victor Vekselberg spoke on the sidelines of the APEC CEO summit about Skolkovo’s role in APEC and fostering the intellectual potential of the Far East.

Russia Beyond the Headlines: What were your impressions of Vladivostok and the APEC CEO summit?

Viktor Vekselberg: As the head of the Skolkovo technopark, it was very interesting for me to see how a completely undeveloped territory like Russky Island was developed into an urban center in such a short period of time. It’s especially interesting because an educational and research institution – the Far Eastern Federal University – is being created here.

It’s very pleasant to see major plans that were announced only three years ago become a reality. The complicated engineering feats that were achieved here show that Russia has major potential in technology and construction.

The bridges are a major feat of engineering. Not everyone knows that several foreign companies, which were initially approached by the developers, turned down the offer due to the time constraints. Eventually, a Russian company built the bridges and did so in quality fashion.

It’s also been nice to see the campus take shape on Russky Island. It’s interesting to think how this area will develop, when the diplomats here today are replaced by students after the summit. Constructing the buildings was important, but filling this university with an intellectual and creative spirit will be the key to the future.

RBTH: How is Skolkovo involved in the development of the University?

V.V.: The Skolkovo Foundation and the Far Eastern Federal University have signed a cooperation agreement, and I hope that we will actively participate in the next phase of the University’s development. For me, the APEC summit is a good opportunity to organize the next phases of our cooperation.

RBTH: What did you think of the APEC summit?

V.V.: Despite a traditionally political connotation, the word “innovation” comes up in practically every discussion that takes place. This applies to business, social and cultural themes. The word “innovation” is a new approach, a new vision of life in the 21st century.

Today our relations with Western Europe and the United States are of a higher caliber than our relations with our APEC partners. We hope that the meetings we held and the presentations we made will help us to make inroads with our Asian partners and exchange experiences in the education and innovation spheres, among others.

Therefore, I think the summit was a success. Russia established its high economic and intellectual potential. We set an important trend for the future.

RBTH: There were rumors that Skolkovo’s budget had been cut for the next three years. How do you plan to finance the project?

V.V.: That information is false. 85 billion rubles (under $3 billion) have been set aside for Skolkovo by the federal government, through 2015. The government recently confirmed this figure, and the money has been spread out across our budget for these years. We’ve already received a part of this funding.

I’d like to emphasize that this money can be split into two categories. The first is designated for creating an environment of innovation and education at Skolkovo; it consists of grants we provide to residents [companies] that are supporting various universities – like the Open University and the Skolkovo Institute of Science and Technology – and popularizing the work of the Skolkovo Fund in hopes of attracting new residents.

We’re working ahead of schedule in all of these directions and have already considered over 10,000 offers. Over 600 companies have received resident status. Our plan is to hit 800 by the end of the year, but I think we’ll accomplish this goal earlier. It makes us very happy to have interesting offers coming in. They all have major innovation potential. In the near future, many of our first residents will be able to show significant results of their work.

The second part of the budget is for construction and realizing the city development plans for Skolkovo. Currently, we’re building the engineering and transportation infrastructure; next year we’ll launch construction of the first residential and research buildings.

Since Skolkovo is being designed as an “intelligent city,” a concept which is gaining global popularity, we hope to be able to serve as a pilot project and share our experience with others building cities of the 21st century.

RBTH: You visited Japan earlier this year. How has Skolkovo’s cooperation with Japan developed since then?

V.V.: During that visit, it was critically important for us that innovation-based partnerships in the context of Skolkovo be at the top of the bilateral, political agenda between our two countries. We had a number of meetings with large Japanese corporations.

One interesting deal to come out of that involved the Russian company FSK and a number of Japanese companies. They created the first underground electrical substation in Russia, which offers an innovative, green approach to electric energy transmission and distribution for urban centers.

The substation has already been constructed at Skolkovo and will be launched in October.

Compiled from a press briefing by Victor Vekselberg at the APEC CEO summit.