The Voice of Russia
Yekaterina Kudashkina 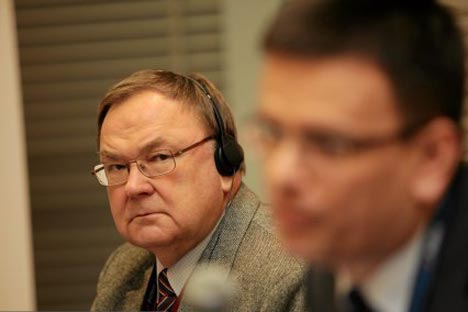 The Voice of Russia: The interesting thing is that this week the so called TAPI project is going to be presented to its potential investors. But first of all, do I get it right that the project is not really new?

Mikhail Krutihin: Well, basically it is not a very new project because we’ve been watching the developments in the same area since the middle of the last century. First there was an American company that wanted to build a pipeline from Turkmenistan to Pakistan and India and then they dropped the project when Taliban came to power in Afghanistan. And now we see that every year we witness some sort of a presentation of the project either to potential investors or to the Asian Development Bank, which has agreed to finance part of the feasibility study. But after those presentations nothing happens, it just remains on paper.

So, do you think that this time everything would still remain on paper? The reason I’m asking the question is that, as far as I understand, after the so-called withdrawal of the NATO forces from Afghanistan the issue of energy supplies from the Central Asia becomes particularly important.

Well, basically it is a very good project in terms of its economics and commercial value apart from one thing – the political instability and the dangers of military actions, military warfare in Afghanistan. I don’t believe the project can go ahead in the conditions that exist in this country.

Sir, but do I remember it right that at some stage the Taliban was invited to participate?

Yes, basically the project faded away as soon as the Taliban came to power. And now if the Taliban would again participate in the project I doubt very much that any sensitive company with the experience of building pipelines would agree to build such a pipeline across the war-torn country with the danger of having the pipes exploded and the personnel being kidnapped any moment, no, I think it is too dangerous to build.

But don’t you think that perhaps this project could itself be a factor of stabilizing the situation in the region?

No, I don’t think so because there have been so many projects to stabilise the area in Baluchistan, in some other tribal areas in Pakistan and in Afghanistan, such as the railways from Iran or new roads from Iran to Pakistan and Afghanistan, and it all stopped short of being implemented because the situation was far from quiet.

Who are the major customers of Turkmenistan energy?

Which means that basically Turkmenistan is not the party which would be the most interested in this project? Is my understanding correct?

Well, Turkmenistan is a very unique country; it just sits down and waits for proposals of foreign companies to build pipelines and to buy gas on the state borders of Turkmenistan. They are not very keen at initiating the projects but they agree with everything which is being proposed. It is a very cozy position.

And who is the major party behind this project?

I think some business companies in Pakistan and India could be interested, and the Asian Development Bank is also very much interested because it has already invested maybe about US$ 30 million in preparing the feasibility studies and investment evaluation studies of the project.

So, if I get it right, just in a nutshell, you are saying that the project is really interesting but on the other hand due to certain security reasons it is still not exactly viable in the current situation, is my understanding correct?

Yes, exactly. It is a good project but it is not doable because of the security reasons.