U.S. Anti-missile plans for the Asia-Pacific 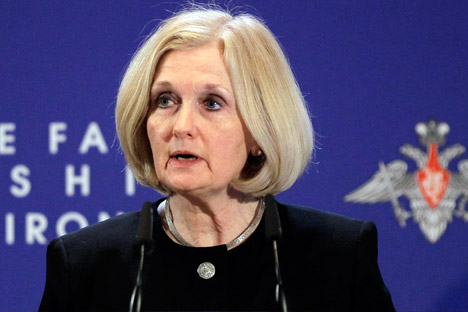 Madelyn Creedon, U.S. Assistant Secretary of Defense for Global Strategic Affairs, says that the U.S. missile defense plans in Europe have been one of the touchiest subjects in U.S.-Russian relations. Source: AP

America’s plans to deploy missile defences in the Asia-Pacific region and the way Washington is implementing START are causes of concern in Moscow.

“The continuing growth of the U.S. potential in what we call the Far East – the Asia-Pacific region – has not gone unnoticed in Russia. We are closely following what is happening between the U.S. and its allies in Asia. Important events are unfolding there and a lot has already been achieved,” Russian Deputy Foreign Minister, Sergei Ryabkov, told a nonproliferation conference in Moscow on September 7.

Washington announced plans last spring to expand its missile defence shield and install its components not only in Europe, but also in Asia and the Middle East. US Assistant Secretary of Defence for Global Strategic Issues Madelyn Creedon said at the time that locations in Australia, Japan, and South Korea could be selected. It was also reported in August that missile defence components – early warning radars – would appear in Japan and the Philippines.

Earlier, the U.S. had announced plans to establish a military base in Australia. The White House has made no secret of the fact that it sees China as the main regional threat. As the American leader Barack Obama put it back then, the United States and small Asian countries had long been concerned about Beijing’s territorial claims to islands in the South China Sea. Washington considers this region to be of great strategic importance, because up to US$ 1.2 billion in commercial shipping passes through it annually it on the way to American shores.

Observers haven’t ruled out the possibility that Russia and China could join efforts to resolve the American missile defence problem. “China has significantly intensified cooperation with Russia in terms of resisting the deployment of the American missile defence system. The deployment of missile defences in the region will be met with rather stiff resistance from China, which will be expressed in diplomatic demarches and will also take some kind of practical form,” Captain Konstantin Sivkov, Vice President of the Academy of Geopolitical Problems.

However, Moscow still hopes to continue negotiations with Washington on this subject. “We must work with America to achieve something meaningful. Failing that, we have a number of measures – measures that the Russian President has mentioned,” Ryabkov said.

Signed in Prague on April 8, 2010, the New START treaty is a nuclear arms reduction treaty between the United States and Russia that went into force on February 5, 2011 for a period of ten years. Under the treaty, the parties should provide each other with information on their strategic offensive arms, including the geographic coordinates of underground Intercontinental Ballistic Missile Launchers (with up to one geophysical minute precision). The parties exchange data on the status of their strategic offensive weapons on March 1 and September 1 of each year.

Commenting on the missile defence programme in his first interview since the inauguration, Russian president Vladimir Putin noted that his American counterpart would like to solve this problem. “Is it possible to find a solution to the problem if president Obama is re-elected for a second term? In principle, yes, it is. But this isn’t just about President Obama. I believe that he genuinely wants to work out a solution to the problem,” the Russian President said.

He believes that both the military lobby and the Department of State, “with its quite conservative machinery,” have been hindering the search for a solution to this problem. “In order to solve the missile defence issue, we both need to accept the fact that we are reliable partners and allies,” he explained.

Meanwhile, yet another problem could be emerging in Russian-American relations. It became known on Friday that Moscow was not happy with how Washington is carrying out its obligations under the Strategic Arms Reduction Treaty (START). “On balance, our assessment (based on inspection results) is positive, but we also have some observations, and those observations are not fit for public discussion. They need to be discussed in the format of a bilateral advisory committee set up under the treaty, and the next session of this bilateral advisory committee will take place in Geneva before the end of September,” Ryabkov told Interfax.

“We have a list of questions we would like to ask the American side, and I suspect that they are also eager to share their opinions with us about what they believe is necessary based on the experience of the inspections exchange. There is nothing there than cannot be discussed, there are no concerns that cannot be overcome through normal, systematic, and responsible work by the delegations,” the Foreign Ministry’s representative added.

First published in Russian in the Vzglyad newspaper