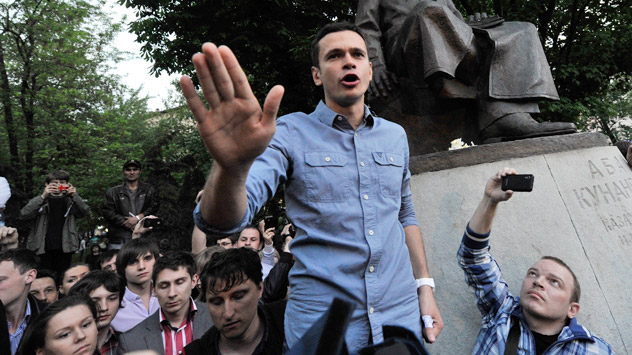 Ilya Yashin (pictured), one of the leaders of the Solidarnost political movement, told reporters that members of the opposition might start using social slogans. Source: RIA Novosti / Alexey Kudenko

The Russian opposition has adjusted its slogans and objectives for the new political season. The Pussy Riot case and arrests during earlier protest actions have prompted a number of additions to be made to the traditional list of demands.

The Russian opposition will gather for another March of Millions on Sept. 15, marking the opening of the fall protest season. More protests, monitoring of October’s regional elections and the struggle for the release of the arrested protesters will be top of the agenda for the Russian opposition this fall, according to opposition activists. Observers, however, expect to see a change in the tactics and strategy of the opposition, including more specific social demands from protestors anticlerical slogans.

Ilya Yashin, one of the leaders of the Solidarnost political movement, told reporters that members of the opposition might start using social slogans. Political expert Alexei Mukhin believes that they will become especially relevant this autumn, when the Russians back from summer holidays will see the impact of the recent increase in utility fees. The new rates came into effect on July 1, but have remained virtually unnoticed as the Russian press was full of discussion over the law on foreign agents and the Pussy Riot case.

Slogans demanding changes in social services are traditionally popular in Russia, but Mukhin says that the opposition will not overuse them this time. Instead, they will focus on criticising those actions that can be interpreted as repression. ‘”These include the Pussy Riot trial and the arrests of protesters during the rally on May 6, whom the opposition regards as political prisoners,” said Mukhin, laying out the potential points of attack.

The demand to release political prisoners is another topic that is quite popular with opposition activists even though the status of “political prisoner” is not defined in Russian legislation. The opposition cannot agree whether the Pussy Riot girls are prisoners of conscience or not, but they have no doubts that the protestors arrested in May fit this category. The opposition promises that those who took part in earlier protests will not be forgotten during the upcoming march. “They won’t match the fuss caused by the Pussy Riot case, but the prisoners of the rally of May 6 will dominate the agenda,” said Sergei Vlasov, spokesman for the Rosuznik human rights project.

One important mission for the opposition this political season is to create legitimate organizations. To this end, the opposition will hold elections at the end of October to a Coordinating Council, which is intended to bring together protest-minded politicians. There have been many attempts to create such an association, but so far none has been successful. The new Coordinating Council has a far better chance of becoming legitimate, however, because opposition activists will have a real election, both online and at real polling stations in Russian regions.

Both professional opposition politicians and little-known activists will run for seats in the council, including Novosibirsk artist and activist Artyom Loskutov.

“My objective is to raise, among other things, the issue of anticlericalism in the opposition. Politicians are afraid to do that, trying to distance themselves from the Pussy Riot protest. If they don’t have the guts to speak against the fusion of the church and the state, then I will. Not everyone will approve of my mission to stop them from clericalizing society,” Loskutov said.

In the wake of the Pussy Riot trial, the relationship between church and society has become one of the hottest topics in the press and the blogosphere. Political expert Vladimir Pribylovsky has doubts that the anti-church slogans will be successful. “Opposition leaders have a problem with the church, they are dissatisfied with the degree of its involvement in the life of the country, but anti-clericalism will hardly make it into the top ten of slogans,” Pribylovsky said.

The demand for fair elections is a long-standing opposition slogan that remains relevant. During the previous political season, which incorporated both State Duma and presidential elections, civil activists moved from chanting in squares to real action – they signed up as election observers and formed flying squads to prevent ballot fraud. Oppositionists promise to be equally thorough when monitoring the regional elections scheduled for Oct. 14.

“I observed the duma elections in the small town of Kasimov this summer. I guess it was because the elections were fair that the candidate of the party in power received just 55 percent of the votes, not 95 percent. Khimki, near Moscow, will be our next battlefield, and we’ll be strong enough to cover all the polling stations and prevent fraud,” said Rustam, who observes elections on behalf of the Russian Union of Observers. Incidentally, the Central Election Commission expects record numbers of observers at polling stations.