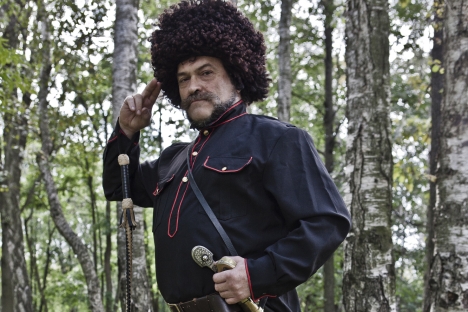 Sergey Nechayev: There is a have a very cautious attitude towards healers in Russia, and people readily accuse them of charlatanry. “This is why healers are, as a rule, very secretive people, and it is not easy to win their trust. Source: Kirill Lagu

Sergey Nechayev, a Russian healer, spoke to RBTH about his successful practise and answered the question why healers are very secretive people.

His grandfather, a Don Cossack who was descendant from an ancient family of healers, lived to be 116. Once, he took a piece of coal from the fire and placed it in his grandson’s hand. The boy frowned, and endured the pain – his father was outraged. His grandfather told the boy’s father: “Leave us alone. He’ll grow up to be my heir.”

Sergey Nechayev does not advertise. Rumors have been doing all the work. “I work with the people whom the doctors have been unable to help. I have no other patients,” he said.

One wall of the room in which he works with his patients is covered with Asian weapons. Swords, axes and whips are placed alongside bright aggressive masks. Another wall features acupuncture charts with full-length pictures of people and a variety of certificates. One of them reads: “Master of traditional medicine Sergey Nechayev.”

Massage, acupuncture, herbs and ointments are his main ‘tools’. When he extends spines or sets bones, he makes people cry – even people who seem to be able to make anyone cry.

But no one has any doubts that it is better to suffer here than undergo surgery.

“I am a trapeze artist by trade,” said Sergey, smiling as he sat in the lotus position. “Circus artists have nothing to do with medicine but they are ‘broken’ there. It was the other way round with me.”

He used to be an amateur boxer before circus school. It was then, back in 1996, that Sergey met his first patient, an athlete with a dislocated shoulder. When he managed to help his colleague, he understood then that his grandfather’s gift could be revived, though this did not come to be until much later. Before this would happen, Sergey worked in the circus and as a stuntman for historical movies, falling from horses and getting injured in blast stunts.

When Sergey was a circus school student, his first teacher, a Chinese acupuncturist, showed him the basics of art. He had to practice on himself to feel the healing effect. Only during a trip to Taiwan was taught how to remove the needles the right way.

Acrobat colleagues started asking him for help. “We perform a double somersault and then someone falls and has a bad injury! I was sticking needles in those poor gymnasts and acrobats. The only alternative for them was plaster and dressing and no healing at all,” said Sergey.

After he finished his professional circus career, he found that could dedicate more time to healing: he treated ballet performers, dancers and athletes. He also continued working as a stuntman for 25 more years.

An important part of Sergey’s life is connected to the Neurosurgery Institute. “There were types of surgery that caused so much pain; I was ready to chop off an arm or leg. Medications didn’t help. And then the Institute worked out a method for burning nerves. But pain wouldn’t go. So I worked on alleviating those pains,” the healer said.

It is not easy to understand and describe the spiritual views of the healer. He is a Christian as well as a convinced pantheist, who deifies the universe and nature. He also believes that all religions eventually lead to a single truth.

A medic must have knowledge of Eastern medicine, Sergey claims. “European medicine regards a human being materialistically. A man is a combination of bones, muscles, blood and lymph. You cut him to observe them. What makes them work together?” He paused. “How can a doctor treat without knowing this? He prescribes treatments subjectively; he performs subjective surgery. They have been talking about the need to modernize medicine but there is nothing to be modernized. We need to study what we already have.”

The healer says he always finds a common language with doctors, but it is not so easy to win the trust of someone suffering from an illness. Sergey showed me a video: an American businessman, the owner of a big company, talking about how Sergey saved him from complicated spinal surgery – it seemed there was no other way to deal with the hernia. But the healer’s massage worked its magic.

Another video was of a doctor with 25 years of experience: he told the story of a friend of his who was delivered to Sergey in very bad condition but now lives happily in Luxembourg. “You should have treatment while you’re healthy, whereas sick people must be saved,” he said. “But few patients are aware of this. Most of them keep putting it off.”

Sergey once saved an old man from an amputation by putting a spell on him. “They’ve invited me to all their weddings and birthday parties to put more spells on the family,” the healer said, laughing.

“I videotape all my patients, if they let me. I ask them to share their feelings about the treatment and results. Why? Who would believe a healer without any proof?”

There is a have a very cautious attitude towards healers in Russia, and people readily accuse them of charlatanry. “This is why healers are, as a rule, very secretive people, and it is not easy to win their trust,” Sergey said.

“Every man is a creature created by God,” Sergey told. “I treat God’s creations, thus serving him. Have there been any failures in my practice? I wouldn’t be here or I would be in prison if I had failed.”

He will have new patients tomorrow and there will be distrust in the patient’s eyes; and the healer will have to prove his abilities once again. It is a never ending cycle.

Before the second half of the 19th century, most medical assistance available in Russia was based on folk medicine. Herbal medicine, baths, cataplasm, hot steam saunas with switches, massage and bone-setting, spells and healing prayers were the healers’ main tools since ancient times. Much was borrowed from neighbors in Europe and Central Asia. Healers learned to use taiga herbs (including ginseng) and how to administer first aid for snake bites from the Chinese. Opium reached Russia as late as the 16th century, and it came from Europe. Yet, long before opium, Russian healers made use of hallucinogenic mushrooms as painkillers. Russian healers were masters of “vacuum” pot massage, which were administered to restore stomach and bowel functions.

The first written prescription based on medicinal herbs in Russia dates back to 1037. A little later, Evpraksia, a granddaughter of Grand Prince Vladimir Monomakh, wrote a book called “Ointments,” describing prescriptions for treating skin and oral diseases. Trade in medicinal herbs was prospering in Moscow and other Russian towns by the 16th century. The first Tsar’s apothecary was established in 1581 under Ivan the Terrible, to service only the Tsar and members of the royal family. Chemicals were used solely by the upper class. In the late 16th century, Moscow established the Apothecary order, which concentrated the entire medical and pharmacy industry of Russia. Under Peter the Great, pharmacies and apothecary gardens appeared in all the largest towns of Russia.

Phytotherapy, or herbal medicine, remains the most popular type of folk medicine. Most Russian citizens will drink tea with lime tree flowers or raspberry tea if they catch a cold; they will treat a cough by breathing the steam of freshly boiled potatoes or swallow several teaspoons of freshly squeezed onion juice; they use the gargle milfoil or dried bilberry infusions to relieve a sore throat.

Given its vast size, Russia has a broad variety of prescriptions and types of herb, depending on the region. Siberian dwarf-pine, which abounds in the hills of Siberia and the Far East, is used to treat rheumatism and cold-related diseases. Urals licorice, which grows exclusively in the Urals, is an excellent remedy for respiratory diseases, having powerful anti-inflammatory properties. Tutsan, which is found in the central part of Russia, has antibacterial, anti-fungal, spasmolytic, anti-inflammatory and vessel-strengthening properties.

The again, it should be noted that folk medicine is not limited to herbs. In Russia, it also includes methods such as steam sauna, mineralogy and zootherapy.