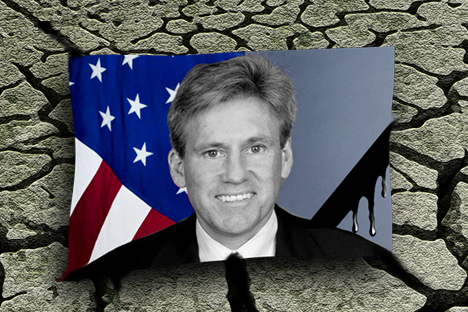 U.S. Ambassador to Libya, Christopher Stevens (pictured), and three members of the embassy staff died in a rocket attack in Libya on Sept. 12, 2012. Drawing by Niyaz Karim

The situation in the Middle East is so muddled that it is no longer clear who is fighting with whom or on whose side – a city where the NATO bombing of Libya was greeted with jubilation by the population just a year ago – only affirms the extent of confusion in the region.

When the dust settled on the ruins of the World Trade Center – destroyed by Arabian suicide-bombers eleven years ago – it seemed that a new dividing line had been drawn. Good and bad were separated, with the “international terrorists” and “enemies of the free world” on the wrong side of that line. Drawn against them was the universal panacea of democracy that would, ideally, propagate itself unaided. Although, failing this, it could be forcibly sown where needed.

Neoconservatives approached the issue from two angles. First, since the U.S. was a global superpower, steps to ensure its security would to be similarly global in character. Secondly, the guarantee of stable global development was a tenet of democracy – the more countries embraced democracy, the more secure the United States would become. The moves that followed – wars in Afghanistan and Iraq, elections in Palestine, and support for various “color revolutions” – were realizations of these goals.

The Bush-Cheney-Rumsfeld doctrines were perceived as faulty, and Barack Obama’s presidential agenda sought to rid America of the legacy of his predecessors. Ironically, it was exactly this series of neoconservative goals that became realized under the Obama administration.

When the Middle East awakened, the masses of its people began to demand real democracy, sweeping aside – sometimes independently, and sometimes with outside assistance – the rule of dictatorships. Regimes which were previously staunch U.S. allies in the war against terrorism were overthrown. The beneficiaries of these popular revolutions were those who, until very recently, had been labeled accomplices of terrorists, if not terrorists themselves.

Bear in mind what happened in Afghanistan in the 1980s, when the U.S. armed the mujahedeen against the Soviet Union: al-Qaeda emerged from within the mujahedeen to turn their weapons on their own former patrons. This is an apt parallel. In Afghanistan, the aim was intentional – the goal of dealing a blow to communism and the Soviet Union was ranked as such a high priority that possible backlash was never figured into the calculations. Furthermore, lacking a pre-existing model for such ideological conflicts, it was impossible to predict how far Islam would bolster its political position.

Today, no one has any illusions about the trajectory of this position – anti-Americanism in the Islamic world has become a widespread phenomenon that exists even throughout the broad populace of voters in the region. Moreover, the seeds of cultural and religious opposition, first sown in the barren ground of the counter-terrorism campaign, have now borne fruit. The example of the radical Islamic fanatic has found its alter ego in American pastor Terry Jones, who burns the Koran in public and enjoys protection from his provocations under the terms of the First Amendment. Most critically, support for revolutions in Arab regions of the world did not emerge as a consciously-formed, deliberate policy in Washington; rather, it was an attempt to adapt the events of a political storm to America’s existing ideological agenda.

On the eve of the September 11 attacks, the brother of current al-Qaeda leader Mohammed al-Zawahiri proposed a ten-year truce with the United States and Western nations, in an interview with Al-Jazeera. In return for an American guarantee not to meddle in the affairs of Islamic nations, Aiman al-Zawahiri offered to protect the “legitimate interests” of the United States and the West, as well as to cease all provocations in the region.

This, however, could not be taken seriously. Mohammed al-Zawahiri himself admitted that he had not been in contact with his brother Aiman for many years. Moreover, even if his brother had been in contact with any influential figures in the organization, al-Qaeda had no downward command structure through which decisions taken by its leaders could be implemented by those in the field. Instead, the organization operated in a more abstract manner, with a variety of power-structures and differing goals and aims. Still, the fact that such an offer was made at all was significant in and of itself.

Political Islam – which had customarily been discussed in the context of al-Qaeda and the global anti-terrorist coalition – has now taken on an entirely different tone, with Islamists coming to legitimate power in many Arab countries. The “Muslim Brotherhood” now governs Egypt and, in opposition to former expectations, Mohamed Morsi has not become the puppet leader of a military junta. Instead, he has taken the business of government decisively into his own hands.

There exists, of course, a broad gulf between Morsi and his extremist brothers-in-arms, the al-Zawahiris; and even this is not on the same scale as the gulf between him and Mubarak. However, this gulf is destined to narrow. On both sides, the radicals are likely to socialize and shift direction towards more moderate policies. Both sides will likely become more legitimate.

Ten years ago, the only hope to emerge from the attacks on New York and Washington lie in the clarification of good-guys and bad-guys in the international system - but the Arab Spring dealt a fresh pack of cards. The leaderships of Libya, Egypt, Syria, and Yemen have become the allies of the same America that fought them in counter-terrorism operations.

The Middle East is undergoing a ground-breaking change, the contours of which are only beginning to be recognized. Although Osama bin-Laden and George Bush contributed to the creation of conditions for this change, the shift itself has its own logic, which is practically immune to external factors. The changes taking place in the Middle East are putting an end to the illusion that the world in the twenty-first century will be shaped by any clear or simple plan.

Feodor Lukyanov is Chief Editor of the Russia in Global Affairs journal.