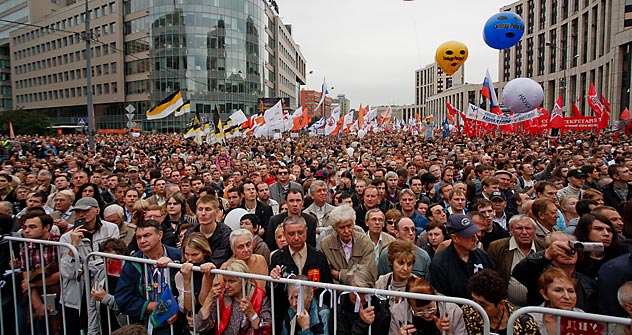 The latest opposition March of Millions on Saturday drew at least 14,000 people to Moscow’s Sakharov Prospect but has left many wondering what next for a mass protest movement that began as a call for free elections.

Police had feared provocations while oppositionists braced for a more radical contingent in wake of a guilty verdict against members of Pussy Riot and pressure on protest leaders like Gennady Gudkov, who was stripped of his parliamentary mandate on Friday.

But Saturday’s march was peaceful and almost “boring” according to some observers who noticed a repetition of speakers and slogans.

“Protests like these need a reason – you can’t just keep going out and saying that [President Vladimir] Putin is to blame for everything,” said Olga Kryshtanovskaya, a sociologist who recently quit the pro-Kremlin United Russia party to study what she called the “revolution.”

“It drew more excitement when it was new and unexpected. Now, my researchers noticed that the average age has gone up and people were showing up as if for work,” she said.

According to official police reports, some 14,000 people had shown up at the height of the rally.  Left Front leader Sergei Udaltsov, who wore black sunglasses “to express [his] rage” as he took to the stage, said there were at least 100,000. Towards the end of the rally, as people began to disperse, protest leaders read out a resolution with demands that included the resignation of President Vladimir Putin, early elections, and the release of at least a dozen prisoners who were arrested for their role in the May 6 demonstration.

Saturday’s march was accompanied by a heavier than usual security presence, with riot police and interior troops lined up along Sakharov Prospect, amid some fears of a repeat of the violence that took place at the first March of Millions May 6, when dozens were injured in clashes.

Asked after Saturday’s rally if there had been any provocations, a riot police officer who declined to give his name said yes, but “we didn’t let them get out of control. Some people came up to us and started saying nasty things, but we didn’t respond. We just did our job.”

The patriotic Eurasian Youth Movement had sparked concern of clashes ahead of the rally when it announced it would meet protesters with Orthodox crosses and silver bullets. Indeed, a skirmish broke out between its members and protesters near Chistiye Prudy subway during the march, and police briefly detained one of the youth group members, Russian News Service radio reported.

No other clashes were noticed or reported, however.

The contingent for Saturday’s rally differed from the young, middle class turnout that filled the ranks of previous protest demonstrations during the winter, spring and summer.

A number of groups representing the defense sector – including paratroopers and border patrol guards – came out to Saturday’s demonstration, with demands that focused on pensions and social issues.

“I came here to look for justice. Social justice,” said Andrei Nekosov, a midshipman who served in the Northern Fleet said. “I am all for Putin being replaced.” Asked who could be the next president, Nekosov said, “This man exists, but he is hidden from us.”

Servicemen were somewhat reticent about their exact demands, but most called for social justice.

“If the government stood before me like you’re standing here now, then I would say what I want. But I’m not going to say it. I want the commander in chief at the least. And I have to say it to him alone,” Yevgeny Artyomov, a paratrooper, said.

Meanwhile, upcoming regional elections on October 14 could breathe new life into the kind of youthful, urban protests that began after December’s parliamentary elections, according to Olga Kryshtanovskaya.

Left Front leader Sergei Udaltsov announced that the next March of Millions would take place Oct. 20. That would make it coincide with the elections of the opposition’s coordinating council, widely seen as a chance for Russia’s perennially disparate protest groups to come together.

According to Kryshtanovskaya, protest waves are sparked by elections and can hardly be sustained without them.

“The only serious path, one that can bring real results for the country, is for the opposition to start working from within the law, to register parties, and start pressuring the government not through street protests, but through legal means,” Kryshtanovskaya said. “Then, gradually, they will get what they want. But if they give up now, then nothing will change.”