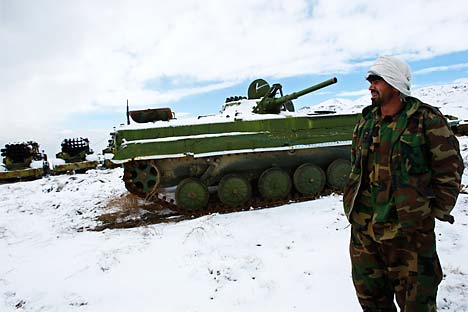 The two Chechens were former commandoes in the Russian Army and were planning a major terrorist attack in Spain or any other European country. Source: Reuters/Vostock photo

Many in the strategic community across the Western hemisphere continue to believe, despite a rising mountain of evidence, that the Lashkar-e-Toiba (LeT), which orchestrated and carried out the 26/11 Mumbai attacks, is a local, at worst a regional, terrorist group and is not likely to harm the Western countries in general. The recent arrest of two Chechen terrorists and their Turkish facilitator from Gibraltar in Spain should give a shake down.

The two Chechens were former commandoes in the Russian Army and were planning a major terrorist attack in Spain or any other European country when they were arrested. The Spanish police believe that the terrorists were planning to target British citizens living in Gibraltar to coincide with the London Olympics held in the second week of August.  The terrorists also told the investigators about their plans to bomb the US-Spanish Naval Base at Rota.

Several lessons can be drawn from this arrest. The foremost is that both the terrorists and their Turkish accomplice admitted to be part of Al Qaeda network active in the region. This is a clear indication that Al Qaeda, far from being terminated as claimed by many after the killing of its leader Osama bin Laden in Pakistan in May 2011, is actively expanding its network to newer areas, making it difficult for the international community to contain it as effectively as in the recent past.

The second lesson can be drawn from what these terrorists were training with. They were training to carry out attacks using chemical materials like ricin. According to the video footage seized from their computers, they were also training in using radio-controlled aircraft. Both these factors make the terrorist plan a diabolic one.

But what should be even more interest to the international community is that two Chechens trained with the LeT in Pakistan. This is not the first time that Chechens had trained with LeT. In the past decade or so, Chechen terrorists have taken shelter and trained at various training facilities set up by different terrorist groups with the help of the Pakistan Army. The LeT is one of the groups which runs several training camps in the tribal areas and elsewhere in Pakistan with the help of ISI and Pakistan Army. Chechen terrorists have been freely operating in South and North Waziristan since 2001.

The two Chechens were trained commandos and as such had no special need to be trained separately by the LeT. So what were they doing in the LeT camp? Going by what the Spanish investigators have told the media the duo were interested in using chemical weapons via radio-controlled aircraft. These skills were what they were looking for at the LeT training camp. The LeT has been known to be working towards developing a chemical weapon use capability for quite some time.

Although the group has been able to develop skill and facilities to train cadres in bomb making, IEDs and other weapons, it has remained unsure about using chemical materials.  This lack of expertise is not due to the paucity of trained manpower—there are enough chemistry students and teachers on their payroll. Nor was the availability of materials like ricin a problem. The LeT-run schools and colleges have enough chemical and biological material to cause havoc if and when used. The group was not sure of the reaction to the use of chemical materials in India or Afghanistan and its patrons were not convinced that the results from the use of chemical weapons would give them any strategic or tactical advantage, at least during peace time.

The Gibraltar arrest, however, indicate the group’s inclination to experiment with chemical weapons in areas away from Pakistan to avoid any immediate fallout. But there is no doubt that the group can train cadres in using such materials in bombs and raise the level of destruction and fear such attacks can generate.

Another important point which calls for attention is the use of radio-controlled aircraft to deliver bombs, quite like mini-drones. This is a method which the LeT has not used so far but may use it in future. The LeT has a little-known air-wing which has been experimenting with para-gliders for quite some time. There are reports of the LeT buying over 300 para-gliders from China and getting some Chinese personnel to train their cadres a couple of years ago. The Chechen’s confessions about the use of radio-controlled aircraft indicate activation of the LeT Air Wing and the threat of the group training their own as well as foreign recruits in using both manned as well as unmanned aerial vehicles to carry out terrorist attacks.

The fact that the LeT could train two Chechens who were planning to carry out attacks against the British in an European country underline the global threat the group today poses. The arrest also establishes that the terrorist groups is not only active in Pakistan but continues to train foreign recruits with immunity. The LeT is no longer a regional threat but a global threat and must be dealt with like Al Qaeda.

The writer is a New Delhi-based journalist-author and a strategic analyst. His latest book is “Global Jihad: Current Patterns and Future Trends”.