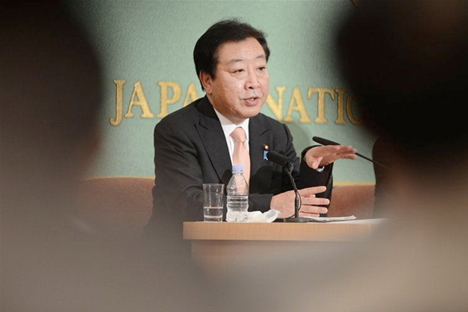 Within 24 hours of the dramatic announcement by Tokyo that Japan is abandoning nuclear energy for producing electricity, there is backtracking. More important, only a desperate clutch of people in the international community appears to take Tokyo’s announcement seriously. In Japan itself, voice is raised that this is far too important an issue to be left to vox populii.

The devil lies in the fine print. Prime Minister Yoshihiko Noda’s announcement Friday appeared decisive all right. But the operative part is that “every policy resource will be brought to bear” to phase out nuclear power in Japan by 2040. “Meanwhile, the 48 reactors, which are currently idling (out of a total of 50 in operation in Japan), will actually restart! Once restarted, they will be kept humming for an indeterminate period! Indeed, decommissioning them needs big bucks.

Curiously, Japan will also go ahead with its planned work to complete three nuclear power reactors, where work was suspended following the Fukushima crisis. The plan is also for Tokyo to go ahead with a plutonium-producing reprocessing program.

So, was it all a fudge – Noda’s declaration? But the cardinal question is, even if it is so, whether it’s a transient fudge that hopes to balance anti-nuclear sentiment in Japan with the practical need to restart the idle nuclear plants. Or, is it a more fundamental fudge involving two irreconcilable protagonists – Japan’s anti-nuclear activists and the broadly pro-nuclear establishment that feels anxious about the business implications for Japan’s long-term power supply, growing dependence on fuel imports and the country’s exports of nuclear technology?

The consensus opinion of western (and Japanese experts) seems to be that Noda resorted to a bit of pre-election gambit to placate public opinion, while the apparent nuclear denial could always be reversed in future.

In the final analysis, in the Japanese political system, business lobbies know best what is in the interests of the country. It is they who would decide for the nation – while Noda carries the can of worms. And they are rubbishing the “zero dependence scenario”, pointing out that increased dependence on fuel imports (at a time when the Middle East is boiling) would mean higher electricity costs, which will be deleterious to the Japanese industry and economy.

Then, there are other factors such as the option that Tokyo should retain to produce nuclear weapons if a need arises in future. Also, Japan’s nuclear industry – companies such as Toshiba, Hitachi, Mitsubishi – competes with Russia and China for exports and atomic-energy business is highly competitive.

Interestingly, Noda didn’t create a fait accompli. Under his plan, after all, the government will constantly review Japan’s renewable energy capacity, international fuel prices, public trust in nuclear safety, priorities of local communities, etc. so that calm decisions are possible between now and 2040 – once the post-Fukushima trauma wears off. What lends credence to this view is that Noda’s declared strategy doesn’t bother to go into details regarding the feasibility and cost of the goal to triple the quantum of electricity produced from a switch to renewable energy.

The international community is taking a dim view of any nuclear freeze on the part of Japan. It almost questions Japan’s sovereign right to change its energy strategy. A Washington Post editorial persuasively argues that the interests of the Japanese public too will be best served through a “more flexible approach to powering the world’s third-largest economy.”

The leading Japanese daily Yomiuri Shimbun leaps further ahead of WaPo – “It was extremely irresponsible of the government to set out a ‘zero nuclear power; policy without illustrating the details of how the nation is supposed to secure a stable supply of electricity. The government should retract the zero-nuclear policy… Such a sloppy, immature scheme is totally unworthy of a national energy policy… It is estimated that vast sums of money would be requires to achieve zero reliance on nuclear energy.”

YS also brings in a new angle – “Britain and France, to which Japan has entrusted the task of spent fuel reprocessing, and the United States, which has put high hopes on nuclear technologies held by Japanese companies, have shown strong anxieties over the government’s policy switch.”

In an oblique reference to markets such as India, the daily wrote, “There is also concern that international status of Japan, which the US has so far deemed as its key partner in pursuing nuclear security policy in the Asian region, may decline.” The YS report is here.