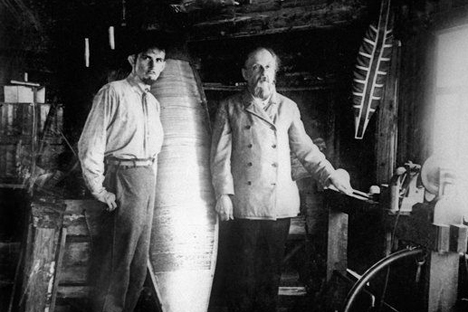 Konstantin Tsiolkovsky (right) is one of the founding fathers of rocketry and space travel. Source: Science Photo Library

Yury Gagarin said that during his flight he had been able to see how precise Tsiolkovsky’s conclusions on all the factors of space flight were.

155 years ago, on September 17, Konstantin Tsiolkovsky, one of the founding fathers of rocketry and space travel, was born in a Russian province. One of his famous sayings goes: “Earth is the cradle of humanity, but one cannot live in a cradle forever”. Long before the beginning of the space era this Great Russian scientist derived a formula for space rockets’ overcoming the earth’s gravity.

Tsiolkovsky’s scientific heritage consists of 400 works including drawings of jet rockets, different calculations and forecasts, philosophical works and fantasy novels about inter-planetary voyages. Tsiolkovsky dreamt about space since he was a child, the head of a department at the Tsiolkovsky Museum of Astronautics History Tatyana Zhelnina says.

“He thought that he was born with this dream. For a very long time Tsiolkovsky did not know how gravity could be overcome. When he was 15 he learnt from the Malinin physics textbook (one of the best physics textbooks of that time) that to do this it was necessary to build up speed at least 28,000 km per hour. But what a flying vehicle should look like to develop such a speed, he did not know.”

Once when he was 17, it seemed to him that he had invented this vehicle. He walked all night long down the streets of Moscow where he lived then but finally he came to the conclusion that he was wrong in his calculations. Tsiolkovsky devoted the next 20 years of his life to defining the qualities of the space environment, Zhelnina adds.

Flying into history in 108 minutes

“If it had been determined that space denied human organism there would have been no need to look for technical solutions to overcome gravity. He wrote several significant works, in which he laid the foundation for the discipline, which is now known as the “physics of zero gravity”. He came to understand that space environment would not kill a human being. He was confident that man would manage to accommodate in space and to neutralize the dangerous effects of zero gravity.”

Yury Gagarin said that during his first flight into space, he had been able to see how precise Tsiolkovsky’s conclusions on all the factors of space flight were. In 1903, he published his most important work “The Exploration of Cosmic Space by Means of Reaction Devices.” In this work, Tsiolkovsky presented the Tsiolkovsky formula which was simple: in order to build up space speed, the fuel mass must be four times as heavy as the weight of the rocket. For the implementation of this idea he came up with the idea of a multistage spacecraft.

Modern scientists are still surprised by Tsiolkovsky‘s far-sightedness. The great scientists predicted modern lock chambers and space suits for space walks. Today Earthlings have their own home on the orbit which is the International Space Station (ISS). This construction weights 200 tonnes and can freely soar in empty space. The idea of the space station also belongs to Tsiolkovsky, who was also confident that the human race would be able to explore the Moon and Mars. According to the scientist, in order to survive humans must have in store a space at least within the boundaries of the solar system.