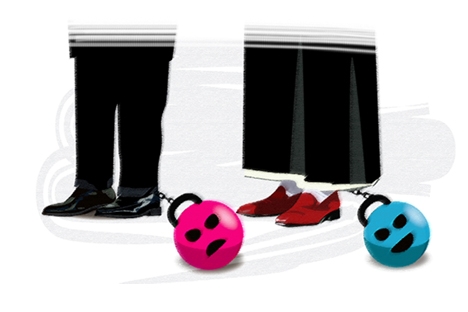 More than a month after the Moscow court handed down a two-year prison sentence to three members of the Pussy Riot punk group, the full impact of the trial is still emerging.

Nadezhda Tolokonnikova, Yekaterina Samutsevich and Maria Alekhina will remain in prison until 2014 – if they are not released earlier on some kind of parole. Such a long sentence can wreak havoc on family life; Nadezhda and Maria each have small children who will most likely suffer enormously during this time.

It all started as a provocative but harmless performance—albeit offensive to many--in Moscow's Cathedral of Christ the Savior. They soon became media superstars and icons for the Russian opposition. But the trial also split Russian society, damaged the reputation of the Russian Orthodox Church and put the Kremlin in the hotseat of international scorn.

Firstly, the court proceedings in Moscow resembled a show trial with a predetermined outcome. To most people it was a demonstration of the state's power to punish opposition activists at will.  Many Pussy Riot defenders think that what they did was not a particularly good or clever thing to do. But they inflicted no property damage or bodily harm. Moreover, the cathedral's security gurards made no big effort to apprehend them. Disliking Russia's president and chanting «Holy Virgin, chase Putin away!», even in the eyes of those who thought Pussy Riot's action was silly and offensive, is hardly worth two years in jail.

While the Kremlin may think that it struck terror in the hearts of opposition activists, what it did in fact was create new martyrs for the protesters' cause and revealed Russia's judicial system for what it is - no more than an extension of executive authority. The Kremlin blew a minor incident out of all proportion, bringing along unwelcome international scrutiny of Russia's human rights record.

Secondly, the Pussy Riot trial dealt a blow to the Russian Orthodox Church. In more than twenty years of post-Soviet Russian history, it has never felt such heat, and overt criticism, from the Russian public. The Church failed to dissociate itself from the state authorities and show forgiveness to Pussy Riot, as many believers and non-believers expected it to do. Instead the church's official spokesmen engaged in what can be called creative theology, claiming that forgiveness can only come as a result of repentance. As Pussy Riot members never explicitly repented, they said, the church did not have to ask the secular powers for clemency. This new interpretation of Jesus's Sermon of the Mount, which calls for unconditional forgiveness of one's enemies, laid the Church open to accusations of hypocrisy and subservience to the state. The fact that the Church's representatives seemed to ignore the quintessentially political aspect of the punks' performance, made the public even angrier. When the Church asked for clemency, after the trial, it was too late.

The case has split the believers and clergy into a majority which demanded vengeance against the blasphemers, and a minoritry which advocated forgiveness. The former cited judicial precedents from the European Union, where in some countries disturbing the peace in the church is punishable by law. The latter tried to call Patriarch Kirill's attention to the fact that where police and justice systems are fatally compromised (as they are in Russia), this argument is false and makes the Church complicit in injustice.

The primate of the Russian Orthodox Church sided with the majority. He even branded those priests who called for clemency, «traitors in frocks».

The Pussy Riot case created the context for the Kremlin to test the Orthodox hierarchy's loyalty. The hierarchy passed the test with flying colors - at the expense of losing support of Russia's intelligentsia and tightly tying its own future to that of President Putin. This may appear to be a good bet in the short run.  However Russian politics look increasingly volatile and unpredictable and the Orthodox Church seems to be oblivious of the growing discontent that slowly changes the society's attitude to Putin and his rule.

Yet the trial also put the Russian opposition in a difficult situation. At a crucial moment when it needs to work hard to form a nationwide network of supporters and participate in regional elections, it was saddled with a controversial image. The politically astute populations of Moscow and Saint Petersburg can differentiate between Pussy Riot support and wider opposition goals. However in provincial Russia, the Kremlin will have an easier time convincing the voters that the protest movement is made up of radicals and freaks.

Finally, society itself is clearly split. The minority that wants political change is small but vocal. The majority (also referred to as the Putin majority) prefers the status quo, is politically passive and lacks initiative. This divide will only deepen in the coming years.