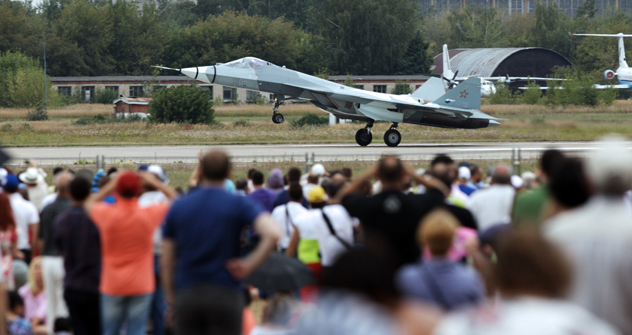 The signing of the Sukhoi T-50 fifth generation fighter aircraft contract propels India to joint developer of the world’s most advanced stealth aircraft.

Two significant developments have stirred up the world of military aviation this year. In March, the U.S. Air Force revealed it had started work to field a new Long Range Strike Bomber by the 2020s. This will be first new American strategic bomber to be built after the Cold War.

How much the global balance of power has shifted since the Cold War days was clear when it was revealed that the aircraft the American bomber might encounter in the skies will have a large Indian signature – in more ways than one. In August, the Indian Air Force announced that India and Russia are getting set to ink the final R&D contract for the Sukhoi T-50 fifth generation fighter aircraft (FGFA) by the end of the year or early-2013. The contract is worth more than US$ 11 billion, and according to the terms of the agreement both countries will share 50 percent of the costs.

That the FGFA would fly was never in doubt. (To meet its air defence requirements, Russia was committed to the T-50 but as the American F-35 programme has demonstrated, having partners translates into assured orders.) The only uncertain component of the programme was the extent of Indian participation. In the past couple of years there was a lot of speculation – and derisive comments – about India’s involvement. Sceptics felt it was limited to merely offering suggestions as to what the IAF wanted – such as two seats or one – while the more charitable ones believed India’s contributions would be in avionics and software.

The IAF chief’s visit to Moscow last month finally lifted the veil of secrecy about India’s participation in the world’s most eagerly awaited fighter aircraft. It is now clear that Hindustan Aeronautics Ltd’s Ozar facility at Nashik in western India will get three prototypes in 2014, 2017 and 2019, and they will be flown by Indian test pilots.

India moves into the big league

FGFA: facing delay but worth waiting

What defence observers have missed is that the FGFA is a quantum leap for India’s armaments industry, especially HAL. After decades of dabbling in joint production – a euphemism for screwdriver technology – India’s aerospace sector will finally step up to joint development.

This will catapult India to a new level where it will finally be able to develop advanced stealth aircraft on its own. Not even America’s leading partners in the F-35 Joint Strike Fighter programme, such as Turkey or the UK, have access to such red hot technology. Instead of being a sidekick, India will be a joint partner in a leading military project.

Russia has already given the draft R&D contract to HAL. It will include the cost of designing, infrastructure build-up at Ozar, prototype development and flight testing. India will soon have scientists and test pilots based both in Russia and Ozar during the R&D phase up to 2019.

An IAF official told Jane’s that the jointly developed aircraft “draws upon the basic structural and system design of the Russian FGFA technology demonstrator with modifications to meet the IAF specifications, which are much more stringent”.

The IAF is hopeful production fighters will roll out of the factory gates by 2022. Up to 250 of these aircraft will be inducted at an estimated cost of $35 billion. Russia will buy a similar number. While it is never easy to place a price tag on such a constantly evolving platform, the IAF estimates the cost per plane at $100 million. The total cost, including options and the value of production aircraft, will make this the biggest defence programme ever in India’s history.

Although the T-50’s specifications remain classified, reports indicate it features advanced stealth capability and supersonic cruising speed. Here is what Air Power Australia says: “The stealthy T-50, albeit in an early phase of development, is showing naked air combat power in the form of extreme plus agility and persistence that, with the addition of advanced sensors, countermeasures and weapons, will likely soundly defeat the F-22 Raptor but will certainly annihilate the F-35 and the Super Hornet.”

This is an explosive statement but coming from ace aircraft experts, the FGFA portends a scary decade ahead for Western air defences and pilots.

Clearly, the designers aren’t sitting idle. A series of developments suggests the FGFA has achieved irresistible propulsion. According to the website of Russia’s United Aircraft Group, which owns the Sukhoi bureau, the company has tested three T-50 prototypes in various modes, totalling around 180 sorties, including aerial refuelling hook-ups with a Russian Air Force Il-78 tanker, AESA radar scans, and large angle of attack and super manoeuvrability test flights.

Carlo Kopp of Air Power Australia and legendary aircraft analyst Bill Sweetman wonder whether the current T-50 represents the definitive configuration. “Today's round nozzles and the curvature of the aft nacelles are not at first glance stealth-optimised, and the engine is not fully masked head-on by the inlet duct,” they write in an article in Aviation Week.

To be sure, those are exactly the areas India and Russia will be working on in the months and years ahead. The IAF, for instance, has specified more than 40 improvements to the design following its observation of flying trials.

For instance, in the early stages of the programme, the IAF was keen on a two-seater fighter bomber, and in fact indicated a requirement for at least 166 single-seat and 48 twin-seat aircraft. But since then it has jettisoned that demand will go in for only single-seat jets now. The reason is that a second cockpit will compromise the stealth capabilities by at least 15 percent, apart from adding to the weight and reducing fuel capacity.

Unlike the dollar-guzzling F-35 which perhaps wouldn’t fly without exports, the T-50 remains viable because of lower development costs and large pre-orders from Russia and India. Still exports can’t hurt. According to the IAF, the broad scope of bilateral cooperation during the joint project covers the design and development of the aircraft, its production and joint marketing to other countries.

The Centre for the Analysis of Strategies and Technologies (CAST), a Moscow-based independent defence and foreign policy think-tank, says that while India will be the first FGFA export customer, Vietnam will be probably its second buyer. CAST Director Ruslan Pukhov believes every third user of the Su-27/30 family of aircraft could be a customer for the FGFA.

For both Russia and India the FGFA programme will be a bold new gambit, as it will overshadow even the highly successful BrahMos missile project. For, while BrahMos is also a 50:50 India-Russia venture, it is basically India’s baby; Russia has turned down an offer to buy the missile as it has the equally capable Club.

However, the FGFA programme could be a template for further defence cooperation between India and Russia. As its economy grows, India is increasingly seeking quality armaments for its armed forces and is keen to wean itself away from imports. Russia on the other hand has the knowhow and experience to produce highly capable weapons platforms. Together, they can ensure that legacy remains intact.