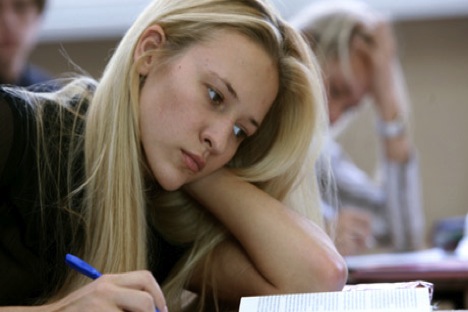 More than half of Russians (54%) aged between 25 and 64 received higher education. Source: RIA Novosti

Russia is the world’s most educated nation. More than half of Russians (54%) aged between 25 and 64 received higher education, the International Economic Cooperation and Development Organization says in a report released this week. Canada and Israel rank second and third respectively.

The majority of people with higher education are engineers and computer programmers. Dmitry Kosov, the press secretary of the Kelly Services recruitment firm, says that many graduates of Russian technical universities have no problem finding a job at home or abroad because their high professional training.

"Russia has a well-developed higher education system and the majority of employees are people with diplomas. These are research and technological staff, experts in information technologies, and so on - people who really possess the necessary knowledge and can speak a foreign language, which makes them the most sought-after specialists in almost any country."

Gleb Lebedev, the head of the HeadHunter research form, echoes that many foreign companies hire Russians because of their non-standard style of thinking, particularly in high-tech spheres.

"Technical education is traditionally Russia’s strong point. Our programmers are appreciated all over the globe, we are beyond competition here thanks to international standards of programming. Our mathematicians and physicists are also in demand."

Mentality is what Russia’s success relies on. Practically every school graduate tries to enter a university or a college to gain knowledge and profession, says Yefim Rachevsky, a deputy at the Russian Public Chamber.

"Our children want to study. Teachers still influence them greatly. And what is also important here is that everyone in Russia has access to education which remains mostly free despite commercial schemes already existing in many universities."

As a rule, Russian students study for several hours a day and from the very first year in a university can start building a career. As a result, by the time of their graduation they can be viewed as experiences and highly-qualified specialists.