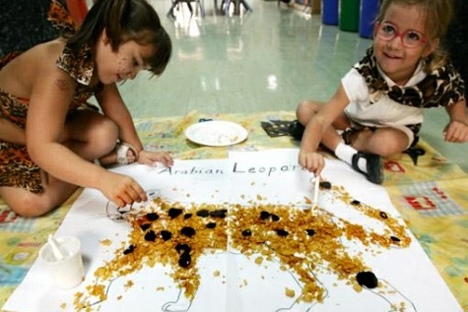 Now the leopards, which reside in a less than ideal location for an endangered species to live in, have a shot at surviving, ecologists say. Source: Francois Nel/Gulf News

The far eastern leopard, one of nine subspecies of Panthera pardus across the globe, once ranged as far as Beijing in the west and the coast of the Sea of Japan in the east, as well as throughout the Korean peninsula.

It all began when then-Russian Deputy Prime Minister Sergei Ivanov saw a movie about leopards.

“We’d be nowhere without him,” said Yury Darman of World Wildlife Fund Russia, who spent a decade trying to save the Amur leopard, the rarest of leopard subspecies.

“It’s really about Ivanov, not the leopard,” Darman said. “The leopard was here forever, but then Ivanov came along.”

The educational film, Save Each of the Survivors!, which Ivanov saw in 2010, prompted the man once tipped to be President Vladimir Putin’s successor to lobby for the creation of the world’s only nature reserve for the near-extinct big cat.

Now the leopards, which reside in a less than ideal location for an endangered species to live in, have a shot at surviving, ecologists say.

But they still face plenty of dangers, including wildfires, hungry tigers, a shrinking gene pool and marines with hunting rifles.

Also threatening their survival are things that big cats usually do not have to deal with, like rural poverty, the state of Russian exports and even the shortcomings of the country’s youth policy.

At least there were 13 leopard cubs born last year, up from zero in 2001, Darman said.

The Last of the Leopards

“In theory, the Amur leopard should have died out a decade ago,” said Sergei Khokhryakov, deputy director of the Land of the Leopard national park which is home to the last 40 to 50 Amur leopards. “There is some factor we underestimate or don’t understand about it.”

The far eastern leopard, one of nine subspecies of Panthera pardus across the globe, once ranged as far as Beijing in the west and the coast of the Sea of Japan in the east, as well as throughout the Korean peninsula.

Now all it has left is an area some 400 square kilometers wide, mostly in Russia’s Primorye region – a tiny blotch on the world map.

The Amur leopard was placed on a protected species list as early as 1956, but the ban was hard to enforce. Border guard officers wanting to transfer from the Far East to some less remote place were rumored to be charged two leopard skins by their superiors, environmentalists say.

By the early 2000’s, only some 30 leopards remained in the wild, including only five fertile females. Some 200 Amur leopards live in captivity, but most are descendants of only two males, which increases the risks of inbreeding and its inherent health problems.

“When I first came here, I didn’t want to work on the leopard at all,” Darman said. “I thought it was a lost cause.”

Khokhryakov said he felt the same, but then national pride kicked in. “How come we can send stuff to Mars but not save a species at home?” he asked.

The Khasan district, the last refuge of the Amur leopard, is not really a good place for a far-ranging reclusive cat thriving on roe deer and the occasional dog.

A closed military zone in Soviet times, the district saw its economy virtually ruined when the army pulled out after the USSR’s perestroika reforms, leaving kilometers of empty barracks.

Left unemployed, many locals turned to poaching just to feed their families. Professional poachers also emerged, butchering salmon for caviar, boiling frogs for fat, a precious commodity in China, and inflicting other damage on local food chains that are topped by leopards and tigers.

Some poachers specifically targeted leopards, though they are now “over and done with,” Darman said with a scowl.

The locals also use fire as a primary means of clearing stubble in fields, not bothering too much if it spreads to the forest afterwards, threatening the cats’ habitat.

He saved the day back then by raising a media fuss, which prompted the regional authorities to dispatch enough people and equipment to swiftly put out the fire. That was despite earlier claims that they had no resources for the job.

In some places, the local economy actually thrived: a railway and a federal highway pass through the area, serving both a stream of tourists heading for the beaches in the district's south and an inflow of goods to local ports.

At its peak, the traffic is 11 cars per minute, which makes it almost impossible for animals to safely cross the road. Even a tigress died under the wheels three years ago, and though no leopards have been hit, a lot of their prey is becoming roadkill, diminishing the food base.

Construction of a gas pipeline to China across the district is also underway. And that's not to mention the three firing ranges and the legal hunting grounds that the military, including the marines of the Pacific Fleet, has kept here and puts to active use.

“The fleet petitioned to not include the hunting grounds in the reserve because it's needed for the 5,000 sailors and their wives and children,” said Svetlana Titova, who oversees protected areas at WWF Russia’s far eastern branch.

“They claimed that otherwise the combat efficiency of the Pacific Fleet will be compromised,” she said.

Another threat is the Amur tiger, also an endangered species, which is not above killing or maiming a leopard in a territorial dispute.

“The job would have been a thousand times easier had the leopard been anywhere else in the region,” said Khokhryakov, who himself previously worked to save the Amur tiger in the Lazovsky nature reserve elsewhere in Primorye.

Cat Man to the Rescue

Environmentalists have spent years campaigning to have it expanded. “I've made enemies of everyone in these parts,” said Darman, himself a native of Irkutsk in eastern Siberia.

Indeed, the local press is full of stories vehemently attacking the leopard backers, who are accused of seeking to obtain land for personal gain, and squeezing out longtime residents – a claim they indignantly dismiss.

Only the interference of Ivanov, now the chief of Kremlin staff, made it possible to overrule the resistance of local authorities and communities and set up a national park spanning 262,000 hectares.

“Putin's protecting tigers, so Ivanov showed subordination and picked a smaller animal!” an environmental activist quipped, referring to President Vladimir Putin's much-publicized involvement in saving the Amur tigers, some 500 of whom now live in the wild.

There is an alternative explanation. “He's just a cat person!” said Titova of WWF.

The total protected area is set to span 370,000 hectares by the year's end. Combined with 320,000 hectares of nature reserves on the Chinese side of the border, this will provide enough land for some 100 to 120 leopards – enough to ensure the immediate survival of the subspecies, experts say.

But a separate reserve population is needed to ensure the leopards are not wiped out by some epidemics, nature park deputy director Khokhryakov said. Work is underway, with a program awaiting sanction from Moscow.

Gun Under the Pillow

The Land of the Leopard houses more than 80 landowners, including several rural settlements and the Pacific Fleet marines and their firing range. Most of the inhabitants are armed, and unhappy at finding themselves residents of a national park.

“I've slept with a handgun under my pillow for three years,” said Khokhryakov, who used to head the nature reserve until a Moscow-ordered reshuffle this month.

More than 430 administrative offences have been recorded in connection with violations of the park in its first year alone, he said.

The WWF has launched an extensive education campaign for locals, printing out leaflets for each of the 30,000-plus district residents and making schools choose a leopard to “adopt.”

In the mid-2000’s, most locals polled by the WWF said they would shoot a leopard upon meeting it, but now the only deaths are accidental, with cats shot when mistaken for other game, Titova said.

The district has formidable potential for eco-tourism, but all it has to offer for now is an improvised “eco-track” complete with faded laminated photographs of plants and taiga wildlife, and wooden animals carved by inmates of a local prison.

Khokhryakov, who now oversees tourism at the reserve, is dismissive of regional officials’ attention to tourism development, which does not make his job any easier. “All they care about is how to stock the bar,” he says.

Anatoly Belov, declared the world’s best ranger by none other than Britain’s Prince Philip in 2010, works in the Land of the Leopard.

Working on a nature reserve is not lucrative. Khokhryakov recalled how he used to feed his family in Soviet times on tiger meat confiscated from poachers (“tastes like veal,” he said).

They also get various monetary bonuses and are granted overseas trips, said Sergei Bereznyuk of the Phoenix fund, a local charity that supports the reserve with money and the occasional quad bike.

Still, most of the personnel are enthusiastic professionals who are not in for the money, both Darman and Khokhryakov said.

But enthusiasm for the mission is in short supply outside the Land of the Leopard.

The WWF used to run seven “leopard's friends groups” stocked with local teens and college students, but now, there are only enough people for three, said Titova.

The adults are not much better. The annual budget of the nature reserve stands at 90 million rubles – under $3 million, a fraction of the $22 billion price tag for the recent Asia-Pacific Economic Cooperation summit in Primorye.

About 40 million rubles comes from the state, thanks to Ivanov's lobbying. Otherwise, most prominent donors are not Russian citizens or companies, but Britons and Germans, Darman said.

“Only the government can save a species,” he said. “Public groups can only do odd jobs.”

Titova pointed that the WWF has been doing the government's job for years.

Creating a second leopard population will cost an estimated $10 million, experts estimate. Nobody can say where the money will come from.

There are five more nature reserves and two national parks in the region, many of them bigger than the Land of the Leopard, but also underfunded and understaffed. Unfortunately for the animals there, they have no films to show to big beasts in government.