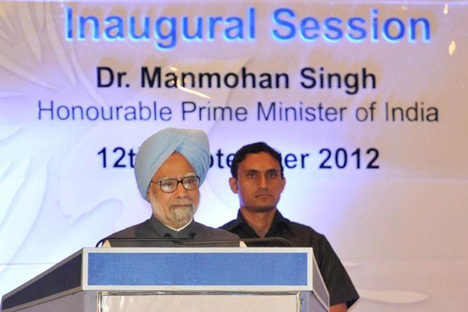 The parliamentary elections in India are due only 20 months later in 2014, but an element of uncertainty has already crept in.

Almost the entire media – Indian and foreign alike – got it wrong. The consensus opinion was that the United Progressive Alliance government in India would make the reform package, which it announced last Friday, “stick”. In sum, Reuters estimated that no matter the public mood in the country, Prime Minister Manmohan Singh has “dispelled the image of an elderly ditherer and demonstrated… that he remains a champion of reform.” More to the point, the pervasive opinion of pundits was that the critics within the UPA, who are the coalition partners of the Congress Party, were merely grandstanding and the government’s stability was not in doubt.

However, within 24 hours, there has been a sea change in the political climate and an air of crisis has crept in following the stunning decision by the Trinamool Congress to quit the UPA coalition altogether in protest over the reform package. The Trinamool went far beyond the maximalist token “protest” it was widely expected to put up, namely, pull outs its ministers from the Indian cabinet in a huff, but continue to be a UPA coalition partner and not doing anything that may rock the government’s parliamentary majority. And the pundits have been left with no choice but to hastily take out their abacus to calculate how in the changed circumstances, the UPA coalition could manage to muster the majority support of 272 legislators in the 545-member parliament to remain in power.

Delhi is rife with conspiracy theories about the permutations and combinations that are likely in the coming days. Evidently, all sorts of wheeling and dealing has begun by politicians who either apparently abhor a mid-term election in the country or are enacting complicated sub-plots of their own in self-interest by exploiting the current political fluidity. The outcome of their chicaneries will be known within the next few days that are surely going to be fateful.

The parliamentary elections in India are due only 20 months later in 2014, but an element of uncertainty has already crept in, because, if the government survives, it will be thanks to the support of political sharks, who would have a price to extract by propping up the tottering government. Certainly, the night of the long knives has begun and the daybreak would come only if India holds the parliamentary polls and elect a new government with fresh mandate.

However, the probability is that dawn may break only at the appointed hour in 2014 or somewhere much closer to that than 2012. In short, the present government may well survive. Of course, the big question is whether there is any point in stretching such a vaudeville act. The government’s credibility has hit rock bottom after the waves of scams began appearing in 2010 and there are times in a democratic system when it is not the majority in the parliament that matters but the mandate to rule, which is a sacred contract of the ruling elite with the people that is not quantifiable. And it needs audacity of the highest order to claim that the government today enjoys such a mandate.

But then, that is an entirely apolitical track, and too far idealistic a yardstick in the realm of competitive politics. Therefore, the question at hand in immediate terms is whether the prime minister will manage to get his reform package to “stick” or will be forced to backtrack on it at least partially so as to create leeway for striking a political compromise.

A partial rollback of the diesel price hike and relaxation of the cap on the number of LPG cylinders supplied to consumers may not be too difficult and may suffice for some regional parties to justify their support for the government. But the real big-ticket item is about opening the Indian retail sector to the foreign multinationals and the “pro-western” prime minister, who has lately taken a barrage of criticism from the West for being an “underachiever” on the reform front, has to factor in that any backtracking on the retail trade issue will alienate the western opinion further and Washington in particular – something which he would dearly like to avoid.

For the present, though, Congress Party has taken an obdurate stand that it won’t budge from Friday’s reform package. The Congress leadership’s estimation is that a flurry of reform measures will help the country regain its high growth rate, and if that happens close to the elections in 2014, the party will be in a position to showcase the performing economy as its trump card for staking claim for a third successive mandate to rule India. That is to say, Friday’s economic reform package actually forms the core of the Congress Party’s political game plan to overcome its tarnished image of leading independent India’s most corrupt government, and to look convincing enough as a ruling party that deserves a renewed mandate.

Meanwhile, Congress’ best bet lies in the fact that India’s political opposition is hopelessly fragmented and it may not be too difficult to find enough time-servers and opportunists to lend a hand to put together the magical number of 272 and thereby claim majority support for the government. The Congress can draw comfort that the public mood in the country remains rather indifferent to the prospect of the country going in for mid-term polls or having the polls on schedule 20 months from now. The average Indian is going about with his mundane life.

In all fairness, Congress may have got its arithmetic right. Traditionally, Congress has well-honed skills in manipulating the fragmented opposition. The two things that can help the Congress are: one, the widespread aversion to mid-term poll among politicians in general. Elections have become very expensive in India and the victors in the 2009 elections would prefer to have the benefit of the 20-month stretch ahead to fill up their war chests through various nefarious deals so that they do have the big bucks in their kitty needed to finance their campaign in yet another prohibitively costly election in 2014. (Indian electoral laws do not ask uncomfortable questions about the source of funding of candidates for elections).

A mid-term poll is clearly not in the interests of the bulk of Indian legislators belonging to the UPA (and also of sections of the opposition). Needless to say, 20 more months in power enable them to extend patronage, accept bribes and kickbacks – and to be part of the government is the leitmotif of their politics. Two, most of the leaderships of the smaller regional parties are highly vulnerable to charges of corruption and the government machinery can make all the difference to their political future – give them hell or help them escape legal prosecution. Simply put, the Congress-led government holds the instruments that could torture, humiliate and even destroy some of them or, alternatively, could overlook their banditry in public life and let them remain as robber barons without accountability.

It is hard to see economic ideology or high principles being the principal factor in the present political crisis triggered by the neo-liberal reform package announced on Friday – with the exception of the Left parties, perhaps. The main opposition party Bharatiya Janata Party is plainly bluffing when it criticizes the reform package, because it has a record of unabashedly following the neo-liberal policies whenever, wherever it happened to be in power in India. As for the smaller regional parties, they have no ideology worth speaking about, and are mostly in the nature of outfits representing interest groups and headed by local satraps lacking national perspective.

The heart of the matter is that if the present crisis appears to be a crisis at all, it is because the country is hardly accustomed to the sight of the regional parties dictating the terms of national politics with such impertinence and/or belligerence as the Trinamool Congress has done. Trinamool Congress commands just 19 legislators and yet it fancies that it calls the shots in New Delhi. But this is going to be the order of the day in the coming years and a sense of routineness may eventually come over it.

The question that lies really worrisome is beyond all this. It is, where India is heading? The founding fathers of the Indian constitution didn’t probably foresee that the federal polity would come across a time when the so-called national parties are in decline and the regional parties storm onto the centre stage of national politics and begin to dictate the terms and directions of governance. Dr. Singh warned only last week that if a political logjam develops in India, the growth rate may fall below 5 percent and stagnation might set in. He spoke not a day too soon.